The New York Times Style Section Has a Flat, Rubbery Back

Look what happened to Canada. 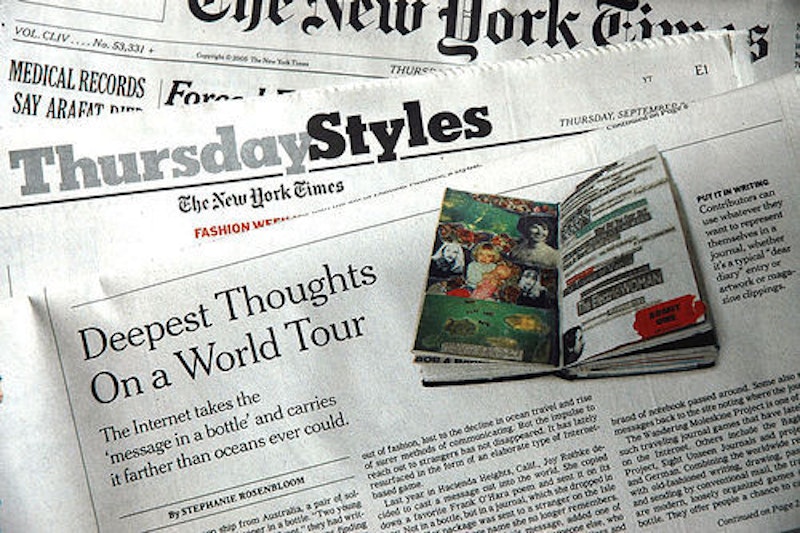 The New York Times Style section is about four feet wide and moves on stubby, glistening toes ridged like earthworms. It scuttles and slides, and produces a wet smacking noise when its underside slaps the dirt. The section’s legs are bent and low, so the thing is never much above the ground. It moves underfoot. There’s no head that one can see, just its rubbery iridescent back, which flushes dull colors as the flat creature snuffles along. The section forages (fake cappuccinos, campus sex assault, Keith Hernandez driving to work), and just now it has found a country and is foraging that.

As it feeds, gurgles are produced. The newly devoured contents plop and fall over, and the sounds crawl through the creature’s translucent layers of blind white flesh. “Land of hyper-politeness and constant apology,” can be heard, and “David Steinberg, Lorne Michaels, Mike Myers.” The thing’s juices break down resistance from the material. Words begin to squirt.  “Coolest cat in a hat, Leonard Cohen.” “Sarah Polley, who makes films of subtle power.”

The creature pauses. It lifts a leg on one side, then a leg on the other; its heft tilts as it does so, wags this way, that way. Then the creature settles down. The long, flat lips of its rear aperture curl to show their sticky underside. Something begins to emerge. The something features a photoshop collage of well-known Canadian faces penned together. Paragraphs follow. The paragraphs give off a high, impertinent smell that wants to yank your nostrils open and insinuate itself. But, high as the smell is, its effects are faint. The reason is that nothing about it is new. “Wasted no time anointing.” “Avatar of 21st-century masculinity.” It’s a reek that comes pre-smelled.

The New York Times Style section pushes its broad, eyeless front into the shrubbery and lies still. It will not sleep, but it can rest. Its back lips furl themselves again and then puff themselves out, and there slide forth a clot of “Toronto-born editor of Vanity Fair” and a lump of “Studied finance at McGill University.” These drop next to “Born in Mississauga, Ontario” and “named after a song by Leonard Cohen.” They become bumps in the smear the creature has produced.

The New York Times Style section takes in and pushes out, and no one can tell why. You will die before it does.