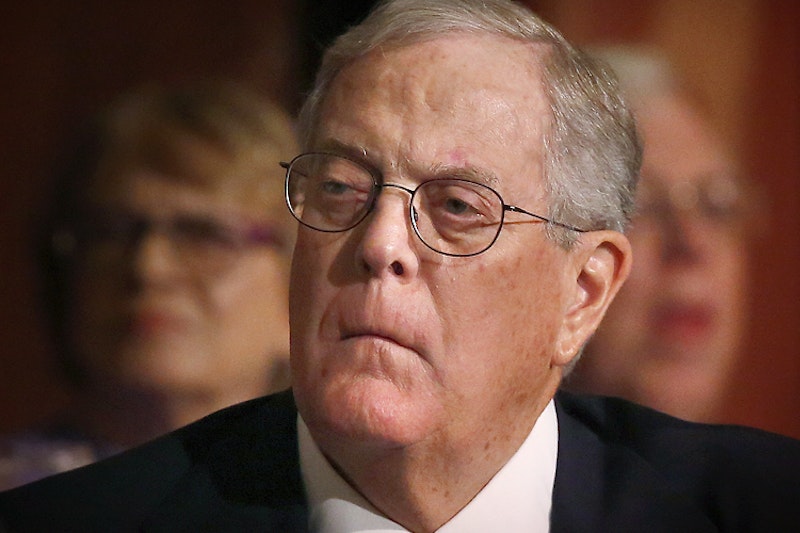 Some idiot activists crowed that they got one of the Koch brothers kicked off the American Museum of Natural History Board. David Koch says he’s just devoting more time to cancer research.

In a mostly positive-sounding State of the Union two weeks ago, President Obama still took a swipe at the freedom to make political donations when he complained about loose campaign finance rules allowing a few families to shape our politics—pretty much Democratic dog-whistling for the Koch brothers these days, since constantly invoking their names explicitly, the way obsessive Senate minority leader Harry Reid has, might look tacky during a State of the Union.

Weirder than the museum ruckus or Obama’s jab, though, are reports that the strange writer Jane Mayer at The New Yorker blames the Kochs’ politics in part on David’s brother Charles purportedly having a fascistic German nanny for a time when he was a kid way back in the 1930s.

I’m reminded of a piece by leftist writer Lynn Parramore that seriously posited economists might be stingy due to a covetous longing for breasts, left over from their early childhoods. Richard Schoenwald, history professor at Carnegie Mellon, similarly argued that 19th-century libertarian Herbert Spencer’s hatred of government was likely rooted in resentment of his toilet training.

It doesn’t get much worse than this sort of innuendo. If the right stoops this low, it’s recognized as slime. If the left does it, it’s called post-Freudian deconstructive analysis or some such and tenure is awarded.

The ostensibly more-serious charge from Mayer that got some attention, another pathetic attempt to make the Kochs sound like Nazis, was her observation that the Kochs’ dad helped build a factory in Germany years prior to the war. Mark Hemingway notes that if we’re going to ideologically label people by ties that indirect (including disclosing that he, like me and many other free-market-oriented writers these days, has probably gotten indirect Koch money since they’re such active donors to libertarian organizations), we might also pause to note Mayer’s ties to The New York Times—an organization which may have done more to contribute to the Nazis’ victories through shoddy reporting on the Holocaust than did any one pre-war factory.

But forget the Times and the Kochs. Countless companies, like them, did business all over the world over 80 years ago—when nearly all governments were awful but none had yet launched World War II. Unlike the Kochs, numerous large, familiar companies did business in Germany during the whole damn war. This political situation will blow over soon enough, they figured. Meanwhile, back in the U.S., the Progressive movement was promoting eugenics.

But people are very selective in their outrage, as has often been observed. While the left obsesses over the Kochs out of habit, they may fail to notice that Charles Koch has lamented he actually has very little influence over this Republican primary cycle. Unless my favorite politician for the week, Ted Cruz, pulls out a surprise victory in the Iowa caucus on Monday, it looks like we’re all probably stuck with Donald Trump as the Republican nominee.

Trump sounds like a real moderate-fascist, not just a libertarian being implausibly smeared as a fascist—and he has mocked the Kochs in one of his endless insulting tweets! Of course: authoritarians dislike libertarians—but you should not. Leftists, once Trump is in charge you may miss the Kochs. You may even wonder why you didn’t ally with them while you still had a chance of stopping the real enemy.