My Dream About Ted Cruz

I thought he wasn’t so bad. 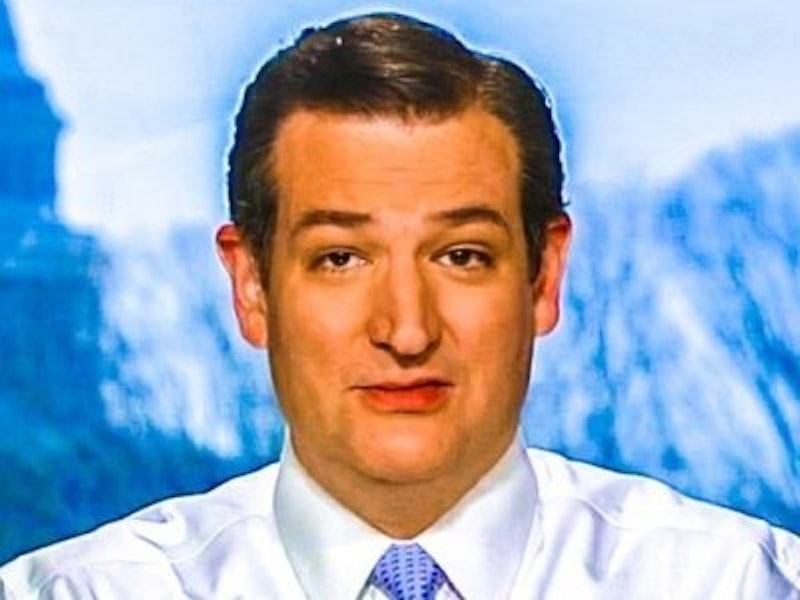 I guess I come as close as anyone to liking Ted Cruz. That isn’t too close, naturally, but I did have a dream where our paths kept crossing and I couldn’t quite see why people recoiled from him and made the faces they did. It satisfied me that they reacted this way, since I’m a liberal Democrat and hope he gets nominated and then stomped. But I kept missing what the fuss was about. He sailed along, nose like a wickedly formed prow, and issued quick, offhand orders. Not endearing, but not terrible either: he was in a hurry and had a presidential campaign to push along. Even so, people reacted the way you always hear they react to the Senator. They looked like they wanted to kill him.

His little boy capped off the dream. Admittedly, Cruz doesn’t have a little boy, he has two little girls. But they didn’t show up. Instead a little fellow with a Beatles cut was there, waiting to enter the college refectory with the big kids. (The dream took place on a busy, milling campus where I was mysteriously attending classes at age 54.) The little guy had reached the head of the line and was about to pass in where the tables were. This refectory dispensed food at the entrance, and Cruz halted briefly as he passed his son. “That,” Cruz said. “You take that.” He pointed at a square, compact sandwich on top of a pile of similar sandwiches. Then Cruz sailed on through the doors, presumably to shake hands and clap backs as he worked the tables. The boy scowled. “Overbearing asshole,” he said. He was just seven or eight, but he had a vocabulary.

Somebody more outgoing than myself might’ve talked with the boy and produced a longer dream. But I simply took note to myself that the Cruz manner had been terse and no doubt peremptory, but not accompanied by a puckered mouth or a curled lip or the other signs that transform a minimally polite exchange into one that’s maximally insufferable. I’d expected maximal and didn’t get it. God knows I have seen these indicators enough times in my waking life, seen them from ordinary citizens whose awfulness hadn’t been celebrated on the national stage. Close up to the legend, I discovered that there was no legend. If Cruz were famous for being cold and businesslike, that would be one thing. But the insufferability wasn’t there.

Yet everybody else saw it and reacted, even the man’s son. Good enough. I reflected on Hillary and the debates they’d have if he won the nomination. I imagined her shovel voice slamming the side of his head, and the country smiling at the impact because to see Cruz is to loathe him. As I reflected on this, my gaze traveled from on high along the snow-crusted reach of Manhattan’s Riverside Dr., because somehow I had come dislodged from my busy university campus.

The best I can say for the above is that it’s about as good as any other political analysis you’re going to read this year.