The Current State of the Army

We’ve got a generation that’s too fat, corrupt, and stupid to defend our country. 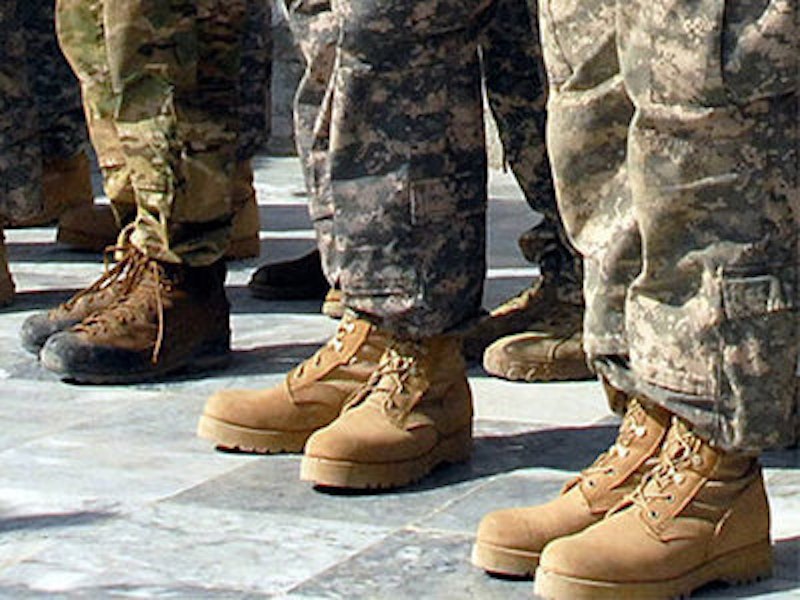 I first noticed it in an issue of Tin House. The literary journal’s theme for Issue 55 was “This Means War,” and that only two writers, Phil Klay and Will Mackin, were the only veterans out that issue’s 22 contributors struck me as a little odd. Not that I think there was a concerted effort to only feature a couple of writers who happened to be vets, but it was a blind oversight. That said, Klay’s short story and Mackin’s essay stuck out for their insightful views on war that only a lived experience can bring. Ever since, I’ve noticed that the gap between the military and the rest of us is tremendous.

With the presidential campaign moving into primary season, and the terror attacks in Paris and San Bernardino, there’s been an increased discussion in how to use our military. What’s especially glaring is how much of that discussion is carried on by politicians who’ve never served in the military.

According to a PEW Research study, only 20 percent of both houses of Congress have current members who served in the military, let alone seen combat. How qualified is this Congress to make responsible use of our military, in addition to being able to adequately meet the needs of our service members and veterans? But then again, only 0.5% of the general population has served in the military since 9/11. If our elected representatives are clueless about the needs and uses of our service members and veterans, it’s because we are.

One of the ways to look at this is to consider how well Congress listens to the Pentagon. In the past few years, there have been concerning reports that climate change is a threat to national security, but both houses are dominated by a party that’s made denying climate science into a morbid art form. A report by the Education Trust found that nearly a quarter of recent high school graduates failed the Army’s entrance exams, and the Pentagon’s own reporting found that about 75 percent of people between 17 and 24 wouldn’t qualify for service because of poor physical fitness, criminal backgrounds, or not finishing high school. So, we’ve got a generation that’s too fat, corrupt, and stupid to defend our country, and I couldn’t find any sort of an official Congressional or presidential response. The only politician I’ve found to bring it up is former Florida governor Jeb Bush, and even then his statistics were painfully inaccurate.

In budget talks, the Pentagon has occasionally suggested that Congress’ spending ideas don’t always mesh with theirs, and sometimes have more to do with indulging their constituents. A prime example is our curious surplus of tanks while 25% of military families need to rely on food stamps.

Perhaps the most painful point of ignorance is in regard to who our active service members actually are. Most of the rhetoric makes it sound as though they’re still the single young men who dominated the military before the end of the draft in 1973. The fact is, most of them are parents (albeit mostly single parents), most of them have some college, and 20% are female. As a result, some common complaints are the quest for adequate, affordable childcare and meeting women’s healthcare needs.

Even after serving, meeting the needs of veterans remains inconsistent. The Department of Veterans’ Affairs has been plagued with charges of an outdated system and waiting lists that can sometimes stretch on for years. Vietnam vet and poet Bobby Mitchum told me, “The VA system has been totally screwed up for a number of years. It would take a revamp of the whole system to fix it.”

Even before our service members become veterans, there remains the question of putting their experience to good use. And that’s where the question of engaged in conflict comes in. When I look at someone like Donald Trump, who thinks that Sen. John McCain’s POW history is a character flaw, and that his own study at a military prep school is equal to and greater than the experience of those who have actually served, his self-aggrandizing wishes for war make him sound like a bloodthirsty ghoul.

My own Congresswoman, Tammy Duckworth, is an Iraq combat veteran, and was kind of enough to email me an answer to my questions about how the lack of military experience influences Congress’ decisions around both veterans’ issues and going to war.

She said: “That’s something I think about a lot as I do my job now. Having actually been in combat and having been wounded, I understand exactly what it is that many veterans experience when they return home. I saw first-hand just how ill-prepared our nation was for the realities our service members faced and the long-term care that would be required. I owe it to those killed and wounded to make sure my colleagues on both sides of the aisle understand the true price of sending troops into harm’s way, both for the individual service members and their families. They will be the first to bleed and our nation’s leaders owe thorough and sober consideration before deciding to engage. As America’s painful experiences in Vietnam and the second Iraq War should teach us, the use of force must always be preceded by an honest conversation about the value of the mission, the nature of the war and the magnitude of the sacrifices we will ask of our brave men and women.

“I am working to make sure Congress understands that these decisions come with a responsibility not just to support our troops overseas, but to support them when they come home, too. We need to streamline and improve the VA healthcare system, work to eliminate veteran homelessness, and help create a path for those who have served to get decent jobs once they have left service. Advocating for veterans has become my mission; it’s a way of giving back to the crew that risked their safety to get me home alive. Every day that I can work toward my mission of improving the lives of our fellow veterans and service members is a gift I treasure.”

As someone who uses social media too much for her own good, I’m always bumping into other writers who often turn out to be vets. My takeaway from this has been that our vets are hungry to share their stories and desperate for us to listen. They’re sick of their issues being politicized and mythologized. I’ve been surprised to find veterans read more poetry and philosophy than any particular group of people I’ve encountered—and I’m better off for all the Voltaire and Cicero they’ve convinced me to read. As Phil Klay has brilliantly argued, our vets deserve respect, not pity. I would add that they need the rest of us to listen with an open mind, and consider that our military is a monolith made up of remarkable individuals.