The New York Times is Rotting at the Seams

How a media institution becomes an afterthought. 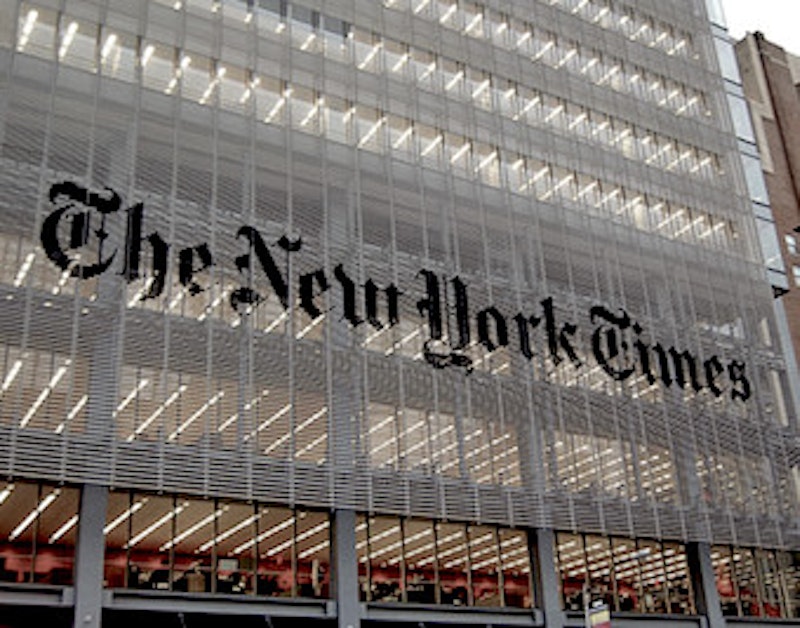 When Newsweek was more than a derelict ghost ship drifting through digital space, I read it cover-to-cover, usually in the moldy periodical room of UC Irvine’s Langson Library. There was a certain meditative luxury to it, sitting back, turning off my brain, and idling for a bit in the uncritical mindset of lazy late-afternoon reading.

It was like a weekly nap with my eyes still open. As a pastime, Newsweek was better than zoning out in the student center over greasy chow mein and reruns of Hollywood Squares. As a way of staying informed or educating myself about the world, it came in slightly behind 60 Minutes, which is to say, it was atrocious and had been that way for a long time. Newsweek had become junk food, proto-infotainment, regurgitating stories the major papers had already covered and recapitulating editorial positions that had come and gone the week (or sometimes weeks) before.

It was occasionally good for a laugh. That was in the 1990s. By then, the magazine was already headed downhill in terms of content but hadn’t yet undergone its ill-conceived restructuring, significant financial losses, a fresh bout of sexism controversies, the end of its print format, and its ultimate disembowelment in the claws of The Daily Beast. What it did provide—what I thought of today while reading Noah Bookbinder’s New York Times letter to the editor, “The Evidence of Wrongdoing by Trump is Overwhelming”—was a template for how a news publication can die.

First, it becomes a mouthpiece for various interests, a platform for a particular set of narrowly defined values. It fires most of its editors, with a corresponding decline in quality and oversight. And it hires ideologues and undesirables, who would never have been seriously considered in more competent times and who only serve to accelerate the dry rot. Then, under extreme pressure to produce content, clicks, and subscriptions, its stories begin to seem irrelevant, repetitive, and curated mostly in terms of its own financial survival, pandering to a shrinking demographic. At that point, as my grandmother used to say, it’s all over but the shouting. Is this happening with The New York Times? It looks that way.

In the past three years, we’ve read a lot of outrageous things in the media, many of them in the letters and op-ed sections of the Times. That’s not surprising. Those sections are meant to be wild and wooly. Moreover, this is an era of outrage, of hyperbole, of political tribalism exacerbated by a 24-hour news cycle that gets more sensational by the day. But occasionally the paper will run a piece so mercenary and devoid of relevant content that I can’t help but remember Jon Meacham’s pretentious last-ditch attempt to transform Newsweek into something more like The Economist, replete with bluster about living in an age of “asymmetrical warfare” and letting the market speak.

The market spoke. According to Howard Kurtz’ Washington Post media column, Newsweek had already lost $20 million in the first quarter of 2009. Meacham’s solution was to cut readership in half while jacking up the price per issue, making the magazine more like a long-form specialty piece. The truth was that Newsweek was already invested in a unique kind of death panic, desperate to rebrand itself as a luxury item, a kind of all-op-ed New Yorker for the broadcloth-and-button-down set. Too bad the New Yorker was already doing that better than anyone else.

It’s easy to see bad decisions in hindsight and nearly impossible to tell the future of an industry that is changing rapidly, sometimes incomprehensibly. But I wonder who thought Noah Bookbinder’s letter to the editor was anything more than a hackneyed echo of what we’ve become accustomed to from the Times since 2016. We know: Trump is the horrible. And, if we didn’t know, any edition of the paper since before his election would’ve enlightened us. Reading Bookbinder, I had an unsettling moment in which I recognized the Newsweek death ritual at work.

In a lesser publication, at a different time, such letters and editorials would pass like so much media detritus. We’d turn the page without a second thought, screening out the noise, not unlike the days I reflexively skipped George Will’s back-page Newsweek column after coming out of my late-afternoon tacos-and-magazine stupor in Langson Library. But this is The New York Times, in which, at least until recently, the choice to feature a particular op-ed or letter was significant in itself and had news value.

Bookbinder starts with an airy definition of impeachment; segues into a thumbnail sketch of possible implications flowing from the July 25 call between Trump and Zelensky; mentions that the recent testimony of William Taylor and George Kent takes us “much further” down the impeachment trail; and then spends about 1600 words driving home what 60% of Americans already seem to believe: Trump should be impeached or otherwise removed from office. Brilliant.

I’m part of the 60 percent that would love to see Trump removed, prosecuted, and permanently excised from politics. But this isn’t about Trump or the chances of his impeachment, which I still feel skeptical about—even if I am quietly hoping for an impeachment Hail Mary. It’s about the rapid decomposition of our national discourse, making 2016 seem like a “more innocent time” in comparison to what might be ahead. It’s about the terminal illness of one of the world’s greatest newspapers and what this might mean.

Bookbinder writes, “The testimony spoken in these hearings, and the facts outlined by these witnesses, must be [the] only guide when [members of Congress] take that vote.” But when was evidence about wrongdoing by Trump not overwhelming? It’s as if Bookbinder suddenly woke up in the periodical room and exclaimed, “Aha! Something is afoot in national politics!” Well, something is. But how is left-leaning fan service like this anything we haven’t seen a million times before in publications that have already lost their way?