We Live In Whiner Nation Now

Can someone please stop the sobbing? 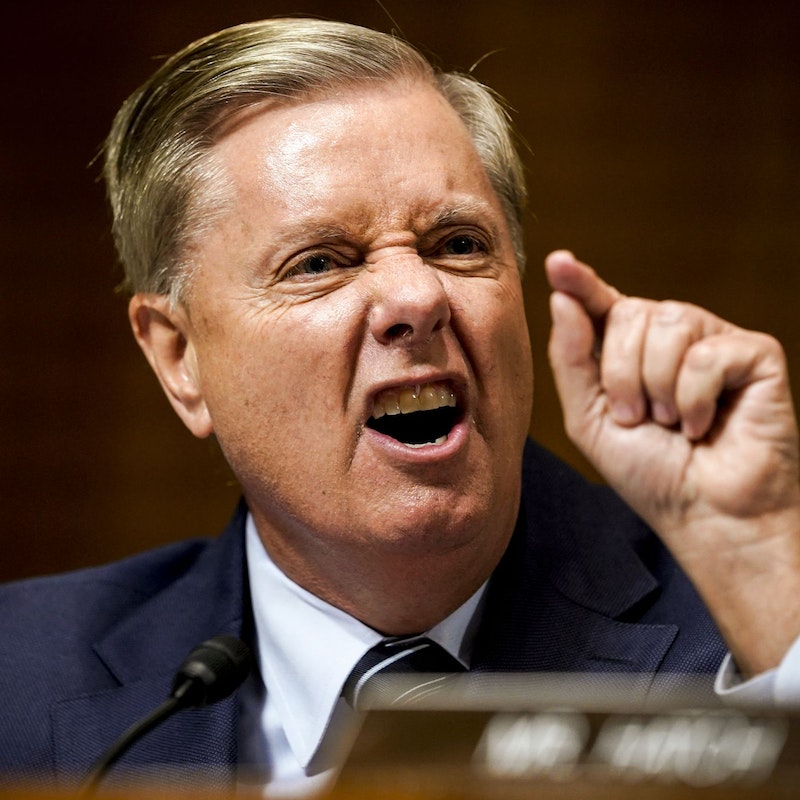 In 2008, former Republican Sen. Phil Gramm said, "We have sort of become a nation of whiners," causing so much commotion that he was forced to step down as co-chairman of Sen. John McCain's presidential campaign. Americans once recoiled at the thought that they're whiners. This is the nation that came to the world's rescue in World War II, stared down the Evil Empire of the Soviet Union, and dominates the global economy. Telling Americans they're whiners, when Gramm did it, was like telling the French that their nation has no recognizable cuisine, but 11 years hence, it's harder to take exception to his declaration. We're living in the golden age of griping.

The Whiner Nation is a top-to-bottom affair. We have our president, who the National Review's Rich Lowry has described as "the most fabulous whiner in all of American politics." But Trump, who uses Twitter to give Americans daily updates on his ongoing sob story, embraces the label "whiner." He once said to CNN's Chris Cuomo, "I am the most fabulous whiner. I do whine because I want to win." Whining has morphed from being the whimpering of a loser into a strategy for victory. There's no more shame in it.

Trump's supporters don't see his constant complaints about being the most unfairly treated president in history in a negative light because they themselves are in a perpetual state of aggrievement over what the "libs" are doing to them and their nation. Scott Walker, former governor of Wisconsin, just got the annual Republican grousing over the Democrats' alleged War on Christmas off to an early start by tweeting a photo of a Christmas tree with the solemn proclamation that it was, in fact, a Christmas tree "that is used by people celebrating Christmas." It's not a "holiday tree," he whined, as if Americans don't have the right to set one up in their homes and call it just that. It shouldn't be long now before Fox News dusts off that tired old beef and starts moaning about people saying Happy Holidays instead of Merry Christmas.

Walker's tweet was as unnecessary as it was idiotic, but for right-wing media outlets like PJ Media it presented another opportunity to whine—in this case about how the liberals reacted to it. Walker had tweeted that he'd heard from Twitter that people—he didn't give a number—were complaining about his tweet. Twitter's a whiner's paradise, but there were probably just a handful of complaints that PJ Media explained were "probably" about "hate speech." It was just one more case of the atheist, Christmas-hating liberals trying to censor a god-fearing conservative.

As for the Left, much of its whining's done on college campuses, a troubling sign of what could go mainstream in a decade or so. Back in the pre-Whiner-Nation 1960s, campus protestors were proud to have their faces appear in the newspaper. It was a badge of honor then, but no more, for reasons that are unclear. Northwestern University's student newspaper, The Daily Northwestern, apologized this month for "harming" students who showed up to protest a campus appearance by former Attorney General Jeff Sessions. In an editorial that's a depressing testament to the current power of the whine on college campuses, the paper apologized for taking photos because some of the protesters found that to be "retraumatizing and invasive"—the initial trauma was caused by the mere appearance of Sessions on campus. The Daily Northwestern also apologized for contacting protestors by phone for comments after students complained that they'd used social media to obtain their phone numbers, which is a standard journalistic practice.

The editorial contained this chilling sentence: "While our goal is to document history and spread information, nothing is more important than ensuring that our fellow students feel safe—and in situations like this, that they are benefitting from our coverage rather than being actively harmed by it." Journalism students at a prestigious J-school actually believe it's their primary duty to not "harm" people who ludicrously claim, while clinging to an absurd notion of what it means to be "safe," that they have a right to privacy when participating in a public protest. When you let students redefine the word "safe" as whatever displeases them, this is what you get.

Groveling, the newspaper expressed particular regret for the "hurt" it caused to those who identify with marginalized groups. That's how easy it is to whine and get your way now in college. A tiny group of student "victims" made their fellow students renounce standards that their future profession demands of them, and the journalism students didn't put up a fight. The journalism profession is already broken, so let's just hope they can't do this to med students in the future.

In a positive development, the Dean of Northwestern's Medill School of Journalism, Charles Whitaker, issued a response to the incident that condemns the student protesters and stands up for the conduct of the reporters. "They were beat into submission," he wrote, referring to student reporters, "by the vitriol and relentless public shaming they have been subjected to since the Sessions stories appeared." With this sentence, Whitaker revealed the dark underbelly of "whining culture." When the whines don't work right away, they turn into badgering and harassment.

The most infamous example of this phenomenon is Shrieking Girl, the Yale student who, in 2015, went off on Prof. Nicholas Christakis in an unhinged rant because of his alleged failure to keep her "safe" from Halloween costumes she might find offensive. Her bullying backfired, however, when the video of her performance went viral and made her an object of derision. Now she's so notorious that she's unable to maintain social media accounts, all because she took whining culture to its extreme. It cuts both ways.

Dean Whitaker's letter is the template for how to deal with the whiner bullies and their mob mentality. You have to come right back at them, which he did in a manner few college administrators can muster the courage to do any more. If you try to be respectful, as Prof. Christakis was, you get someone yelling in your face that you're "disgusting." Let's put the shame back into whining.