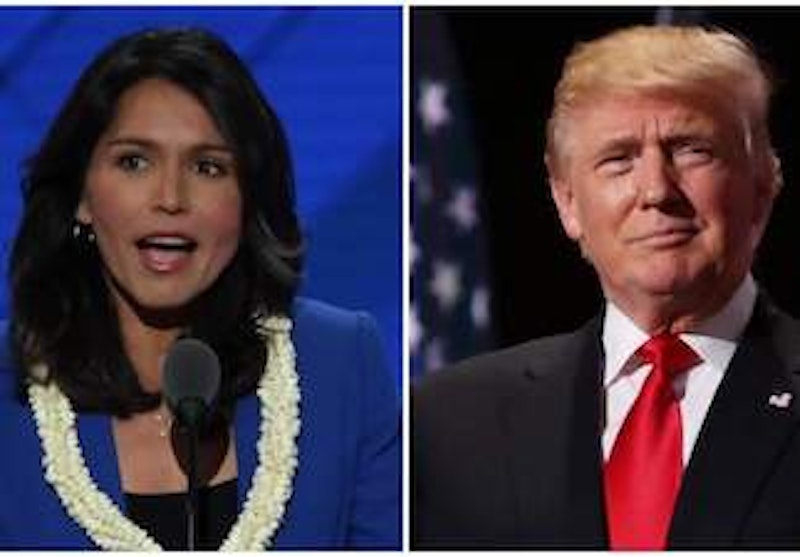 Trump wants troops out. Tulsi wants troops in, as does almost the whole U.S./military establishment—but they still hate her because she’s not as militaristic and pro-intelligence sector as the rest of them. I’m not really sure what Putin wants, but I wouldn’t want to get further entangled in the ludicrously multi-factional and ugly Syrian civil war regardless.

Trump sounds as if he agrees—and for relatively sane reasons, given tweets such as the one a month ago in which he said, “The United States has spent EIGHT TRILLION DOLLARS fighting and policing in the Middle East. Thousands of our Great Soldiers have died or been badly wounded. Millions of people have died on the other side. GOING INTO THE MIDDLE EAST IS THE WORST DECISION EVER MADE.” Music to the left’s ears if it were said by a Democratic politician 12 years ago, and surely more important than the sorts of technicalities being debated in the impending hearings on impeachment. Fate of the world and all that?

The establishment needs a consistent anti-Trump narrative, though, so I suspect the muddle that is Syria (with its ambiguous ties to nearby Russia) has now contributed to the establishment de-emphasizing Russia and Syria just a little bit and playing up Ukraine instead (fewer factions, less violence, slightly easier messaging). That’s still a risky rhetorical gamble for the Democrats, though, since the needle they want to thread—I mean for political purposes, since I’ve no intention of getting into all the legal details here—is the drawing of attention to Trump’s dealings with Ukraine without drawing more attention to the Bidens’ (and Pelosis’ and Kerrys’) even fishier dealings with Ukraine.

More about Ukraine and impeachment hearings next week, though. Before another stunning wave of political amnesia washes over everyone (remember being on the brink of war with Iran and Venezuela a few weeks ago?), I want to make sure we remember the long haul and the big picture: specifically, surviving the Cold War, which effectively ended 30 years ago this month when the Berlin Wall was breached.

Like many who came of age at that time, I was sure that the world would rush to embrace new opportunities for peace. Thirty years later, instead, we get a bipartisan foreign policy establishment that seems more united in its hatred of Russia now that it’s a faltering semi-democratic, semi-authoritarian state than it was back during the Cold War, when Russia was a hardcore Marxist totalitarian regime.

So we get Sen. Lindsey Graham suddenly remembering that there’s something he loves more than Trump, and it’s war, tweeting: “The Obama-libertarian foreign policy does not make America safe. If ignoring radical Islam made America safe, there would NOT have been a 9/11.” It’s flattering that we libertarians, who have virtually no influence over foreign policy or anything else, get noticed once in a while, I guess. Maybe Graham doesn’t want to come right out and say Trump is too pacific, so libertarians, as is so often the case, can be the scapegoats instead. Long may Sen. Rand Paul continue pulling the strings of civilization.

Luckily, people across the political spectrum are growing weary of perpetual war—though libertarians seem to remain the only faction that understands central economic planning is also bad. (Witness Sen. Marco Rubio’s recent condemnations of free marketeers, who perhaps don’t favor sugar-industry subsidies as much as his state would like. Who needs communism when you have Rubio?)

Kudos to those, mostly on the left and right fringes instead of the complacent center, who are also waking up to the fact that the so-called intelligence sector both manipulates domestic politics and paves the way for military interventions overseas, neither activity helpful to ordinary U.S. citizens. Even the mostly-liberal-centrist New Republic just ran a piece warning that the Deep State is now functioning as a domestic political faction after decades of people insisting it either didn’t exist or didn’t involve itself in domestic affairs.

This year has been not only the 30th anniversary of European Communism’s end but, embarrassingly, the 100th anniversary of the Communist Party USA (that will sound ancient to the young, but it’s only about twice as old as me, which gives me a new awareness of how rapidly history actually moves and the world changes). I attended a Christmas party one year at the New York City HQ of the Communist Party, just to see what it was like. Some of them praised Obama at the time. No one to my recollection mentioned that CIA Director John Brennan had been a Communist Party voter at one point in his youth, which might instill less pride by radicals’ standards.

A guy who attended Brown around the same time I did, back when the Berlin Wall fell, later became the Communist Party’s property manager. Ironically, they make most of their money from being landlords, renting out floors of that nicely-located Manhattan HQ, something many 19th-century leftists would have abhorred. (Prophetically, back at Brown that future property manager even played a game of Monopoly against a woman I’d later date.)

I don’t blame the Communist Party for going into the real estate business. You have to adjust with the times. The dialecticians of the left, the Russians, and the new coalitions forming on the political fringes in the U.S. all understand that. I fear the foreign policy establishment, by contrast, would like to stick to 1958, just to keep from having to revise their psychologically and tactically useful anti-Russia playbook.