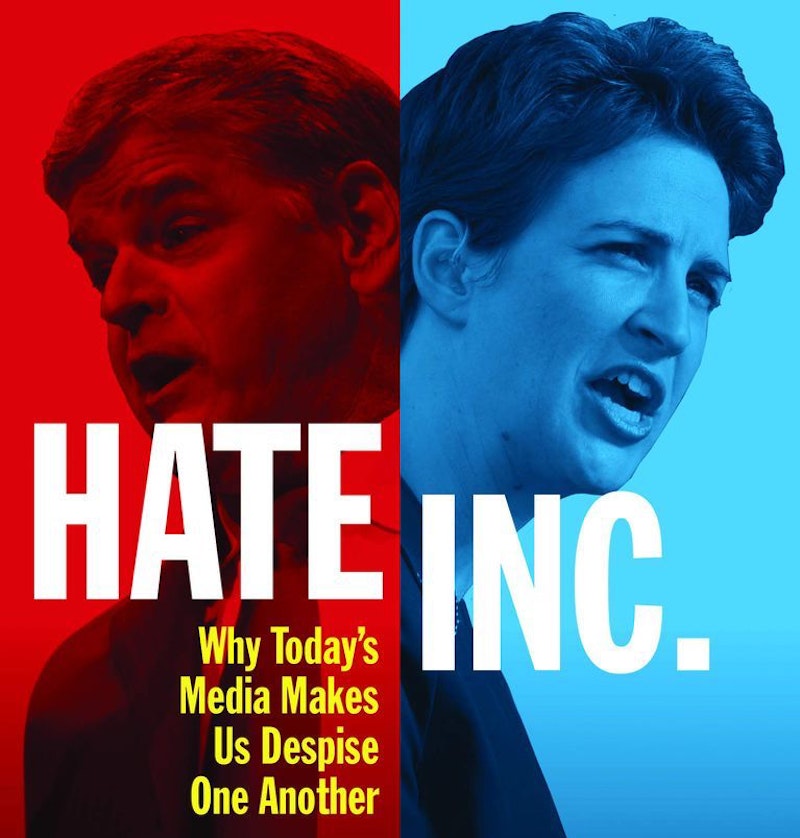 Matt Taibbi made it: not only did he survive a mild #MeToo, he's still with Rolling Stone after 12 years. Born in 1970, his is likely the last generation to produce widely-known print journalists that write long investigative pieces in major magazines. Vice can send Animal Collective to the Amazon Rainforest, but those kinds of budgets have vanished for less frivolous subjects, like fracking and derivatives. Hate Inc., Taibbi’s new book, is not about the demise of the print industry (thank God), but our present situation: 1000 percent red-hot rage at all times.

Published by OR Books and shot through with typos—the most egregious “Samantha Flake” for Sandra Fluke, the woman that Rush Limbaugh called a slut for wanting affordable birth control in 2012—Hate Inc. is a book caught between eras written by an author caught between movements. He’s not a great writer, but his diagnosis of the media is accurate. Jim Acosta is performing a role he learned watching Network and The West Wing, and in the wake of Trump, all editorial standards have gone out the window, exemplified by The New York Times' historically partisan frontpage on November 10, 2016: "DEMOCRATS, STUDENTS AND FOREIGN ALLIES FACE THE REALITY OF A TRUMP PRESIDENCY" (an article from the day before was much better: "Donald Trump Is Elected President in Stunning Repudiation of the Establishment"). Taibbi recognizes that Trump is a brilliant politician for leaning on his professional wrestling tendencies, and I wish his interview with the wrestler was longer.. As Taibbi writes, Trump a born heel. And the media, largely siloed on the coasts, not only know nothing of professional wrestling but also disdain the people who love it. If you know nothing about the people who vote for President, how can you report on the campaign?

Much of the book features the ever annoying “lanyards” that make up the reporters’ pool on a presidential campaign. On the campaign trail in 2004, questioning colleagues pushing an obviously bogus mistress story: “Reporters took in the treacherous fact that I was doing a story on us with varying degrees of fury. ‘This,’ one reporter said to me, waving a hand across the press seats in the Kerry campaign plane, ‘is a fucking no-fly zone, dude.’” These people either don’t realize or don’t care that a vote for president is not a lifestyle decision, in most cases it’s purely harm minimization. More than anything else, the American president inherits the military and can do whatever they want with it. Foreign policy, a bipartisan disaster, isn’t covered. Neither is financial corruption, and indeed Trump swept up the support of people who were furious at party hacks for fucking them over with useless wars and bank bailouts.

In the Trump era, MSNBC has become as hysterical and nakedly partisan as Fox. This is obvious to anyone with eyes and ears that lead to a functioning brain. The fact that Taibbi feels the need for an appendix explaining why Rachel Maddow is next to Sean Hannity on the cover of a book called Hate Inc. says enough: why the hesitancy? Of course Hannity is a bigot, and yes he advocates for a President who puts children in cages and separates them from their parents forever.

Maddow’s not a bigot, but I question her true allegiances when she says things like, on the day of Roger Ailes’ death, “I considered him a friend.” How can I take anything you say seriously after that? Their politics are not within striking distance of drinking buddies or friendly adversaries. If we’re to take Maddow more seriously than Hannity, shouldn’t we at least be assured that her indignation is indeed righteous? Or is it just performance art—the sort of one-person plays I grew up seeing in Lower Manhattan (and, later, suffered through in the car via NPR in Baltimore). I think that a lot of people on MSNBC would be a lot happier on SNL (not Maddow, but Brian Williams? Oh my god). Their missed opportunity is our burden to carry.

Taibbi on Maddow (a friend, probably no longer) and her symbiotic relationship with Hannity: “The Rachel Maddow Show and The Sean Hannity Show have become Crossfire for the new generation. In this updated version of fake political combat sold as theater, the pugilists never meet in the ring.” He laments the fact that Maddow will likely go down in history as the Judith Miller of Russiagate (he has a strained aside about their gender: “Further commentators will probably make note of the obvious fact that in both cases outspoken women ended up being the ones herded out the village by colleagues, forced to wear the yoke of journalistic blame. Make what you will of that, but it’s not all on her.”). It's an earnest defense of a friend that probably won't return the favor.

Plenty of journalists and pundits have been "herded out" since 2016: Nate Silver, Bill Kristol, the entire New York Times op-ed page; even Barack Obama was criticized recently for imploring for “realistic” political goals, i.e., centrist policies. We’re living in a very volatile political moment, people are going to start making Maoist propaganda again. Will it be real, or will it be like Vladimir and Rosa? A great political realignment is happening across the world, and it's a miracle none of this serialized book is out of date. There's a new revolution in Latin America every week. The spread of leftism and the success of a leftist candidate in the United States is a question of when, not if. This was unthinkable five years ago. Obama just dismissed “purity tests,” but when the question is Medicare for All (free at point of service) versus… Medicare for All for those who want it? Jesus Christ.

We don’t have time for incremental solutions. Our lack of proper healthcare is a more immediate threat than climate change, and free healthcare would ameliorate so many problems: mass shootings, exurban immiseration, suicides, anxiety, and of course money.

What if every American never had to worry about how much healthcare cost? What if our medications and talk therapy were subsidized by the government? The “fuck everything” vote would vanish. Lanyard Democrats ask with astonishment how any veteran could support Trump after his comments about John McCain. Words are meaningless when you’re in constant agonizing pain because you can’t afford the pain medication that keeps you from blowing your brains out that incidentally has become much harder to come by because of the opioid crisis, which was created by rapacious pharmaceutical companies.

Why haven’t we legalized marijuana yet? The inability of the national press corps to pick up on the misery of “flyover country” leaves them ill-equipped to do their job. Taibbi makes an obvious case, but I suppose some people are still too thick to see the obvious (hence, once again, the appendix).

Taibbi’s torn between the full-bore leftist revival and his assumed audience of Rolling Stone liberals. Hence the Maddow appendix, hence the Nate Silver apologia (he says he “hates ripping on Nate Silver” before ripping on Nate Silver—again, an earnest defense by a fan from Silver's sabermetrics days). He’s been on Chapo Trap House, Democracy Now, and The Young Turks; and he’s got a really good podcast with Katie Halper called Useful Idiots where they shoot in all directions. He’s obviously not an MSNBC liberal—where does Taibbi stand? Ironically, the supposedly “objective” position he’s staked out and defended as a matter of principle and upbringing has left him roadside, outpaced by partisan leftist programs and outlets. How many Zoomers read Rolling Stone? Taibbi’s equivocation isn’t going to set any teenagers’ cheeks afire, unlike Red Scare, Chapo Trap House, The Antifada, and the Proustian recollections of Cum Town, a comedy podcast so stunningly brilliant it transcends media categorization.

The unasked question of Hate Inc.: what will it take to ditch the dysfunctional two-party system that presents us with a false binary? Taibbi isn’t prepared to say revolution. If Trump or another Republican wins next year, the leftist movement isn’t going away. How long can it be contained and kept peaceful? Taibbi demands a “media reckoning” while conceding it’ll never happen, but I don’t think the media can recover. The hysterics on display now from billionaires regarding Elizabeth Warren and Bernie Sanders—and the absurd prospect of a Bloomberg/Abrams ticket, as proposed by village idiot Chuck Todd—betray a panic that has swallowed all of their self-awareness. Yet, Taibbi proposes no alternative: this is a book about the death and disintegration of an industry, and a cry for standards that have been thrown out in favor of histrionics.

As a boy, Taibbi thought Walter Cronkite’s sign-off, “And that’s the way it is,” was cheesy and unnecessary. But then he praises it, a lost gesture of a time when the news indeed had an end. You can turn it off. Hate Inc. is about the journey from reassuring viewers to inflaming them, and its working title Manufacturing Discontent surely would’ve sold more copies (a short interview with Noam Chomsky is included at the end of the book). But the news doesn’t have an end, and it never did. Cronkite was manufacturing consent, and now we must move between silos to get different kaleidoscopes of the world with little relation to each other. Shouldn’t we want more partisan writers that shoot in all directions? We welcome bizarre personalities on the radio, why not in the op-ed pages? A certain guaranteed readership is going to die off eventually, so when is The New York Times going to publish an anarchist? Taibbi makes this point, but his own partisanship is so mild these days, who's listening?