The New York Times Is Correct on Necessity of Immigration Reform

But the paper’s dreaming if it thinks Clinton has real interest. 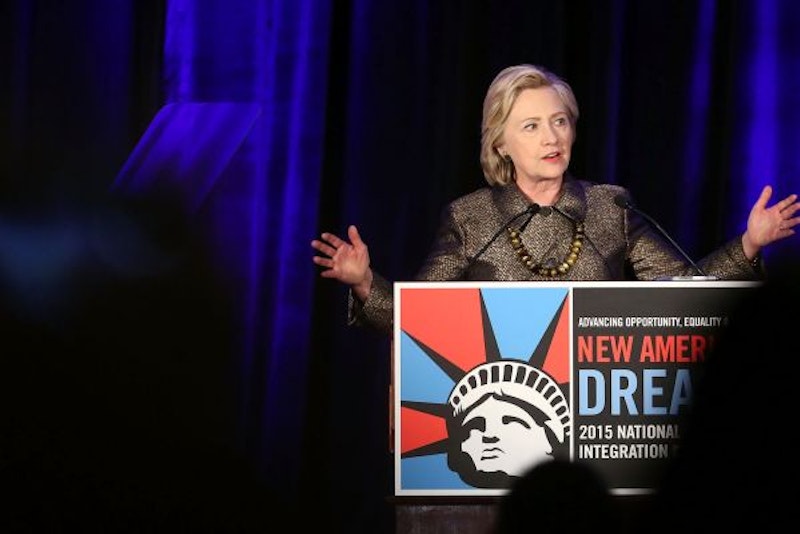 It’s not often I agree with a New York Times editorial, but Sunday’s lead comment on the current environment of xenophobia in the United States was, for the most part, correct. The now-quaint notion that America was a welcoming country, one that encouraged immigrants from all over the world, bolstering the economy and enriching communities, no longer exists. It’s my view that this debate runs in cycles—and, at some point, whether led by Democrats or Republicans, Congress will finally pass legislation promoting meaningful immigration reform. Unfortunately, that’ll probably take a few more election cycles.

However, as usual, the left-wing Times editorial writers indulged in saucy prose blaming Donald Trump—a troglodyte on the issue—in particular, and the GOP in general, for this disheartening refutation of one of America’s most compelling historical attributes. The edit begins: “Donald Trump is heading to November like a certain zeppelin heading to New Jersey [I assume that zeppelin isn’t Gov. Chris Christie, but one can’t be sure], in a darkening sky that crackles with electricity… There’s still no telling what will happen when the gasbag reaches the mooring… Yes, Mr. Trump speaks frontier gibberish. Outright nativism remains a fringe American phenomenon.”

“Fringe phenomenon”? I don’t think so. Correct me if I’m mistaken, but President Obama, upon his election in 2008, was gifted with a Democratic Congress for two years, yet despite his rhetoric (echoing that of his maligned predecessor) extolling the American Dream and calling for immigration reform, he never acted on it. The Times doesn’t mention that. Hillary Clinton, in the current election, barely pays lip service to the idea, knowing that millions of Democrats agree with Trump (and Ted Cruz, among other Republicans) that “foreigners” needn’t attempt to land on these shores. It’s a toxic issue, and Democrats are tickled to take cover on it, knowing that Trump’s meandering and incoherent promises of, say, a wall separating Mexico from the U.S. means they can stay silent.

Additionally, you’d think the Times might detour for a sentence or two from its Clinton cheerleading to mention the Democratic candidate has become an ardent protectionist, now opposing the Trans-Pacific Partnership that Obama, to his credit, is trying, likely in vain, to get passed. If elected, will she attempt to repeal NAFTA (one of her husband’s accomplishments) as well?

The editorial continues: “Optimists, eyes on the polls, hope that Mr. Trump, in losing, will discredit these views [nativism] and that Republicans will next year sue for peace. Under this scenario Hillary Clinton and Paul Ryan or whoever is running Congress will move fast to push forward a rational immigration reform bill.”

I’m not one of those optimists. Hillary Clinton is for Hillary Clinton, and like her husband, will govern by polls. Yes, the Times is correct that certain Republicans have exhibited—reveled in!—scurrilous demagoguery on immigration, but Clinton, in her silence, is nearly as complicit.