Sean Spicer Is a Typical GOP Warrior of Today 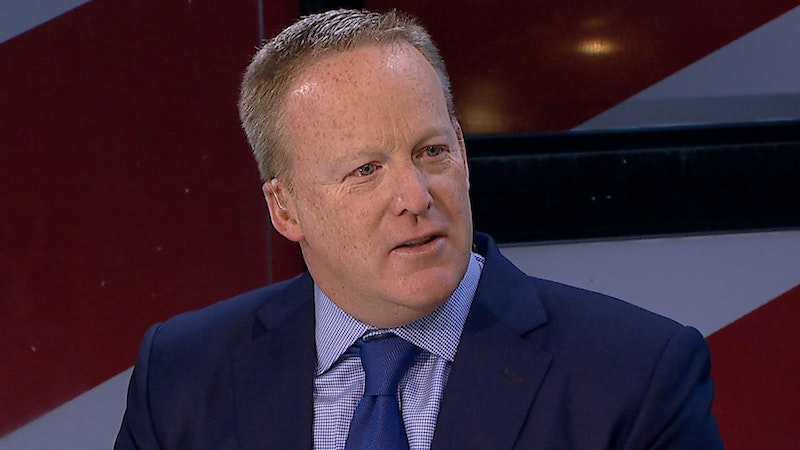 “If the charge against me is that I fight to win and I’m intense,” says Sean Spicer, “then I’m guilty.” Yes, the man has the eye of the tiger. Does he compete? Like crazy. “Whether it’s Nerf basketball or trivia,” attests Reince Priebus, his boss at the Republican National Committee. Priebus is chairman, and Spicer is communications director and chief strategist. The Washington Post, in its recent profile of Spicer, says he wanted to be chief of staff but lost out. That’s according to “a number of his colleagues,” and the paper adds that his special title of chief strategist was dreamed up as “consolation.”

But he’s a fighter. His job is to call up journalists and yell about coverage. The Post: “One editor of a D.C.-based publication said she’s been on the receiving end of so many Spicer tirades that when he calls her at home, her young child will recognize his voice and burst into tears.” Now that Donald Trump is the Republican nominee, Spicer does his yelling on Trump’s behalf. That angle has inspired snootiness in some. “To be a spokesperson you need to be able to defend the nominee without hesitation,” says a former aide to Mitch McConnell. “I can assure you that 90 percent of the people who have done this kind of thing for a living would have some hesitation. But I’m glad somebody’s comfortable with it.”

Spicer: “There are doctors who help people who have done bad things, there are lawyers who defend bad people.” Anyway, he knows where his center is. The Post: “He says the only people whose opinions he truly cares about are his parents, his two young children and his wife, Rebecca, an executive with the National Beer Wholesalers Association.”

The Post tells us about his face (“the nose is pinched, the hair is sandy blond”) and adds, “But all you really need to know can be seen in the mouth. This is where Spicer’s talent and nervous energy meet.” I find that alarming. If we ever meet, I refuse to look at Spicer’s mouth. And yet, to get high-falutin’, that’s all he is. His talent is to yell into a phone like a customer who’s mad at a big-box store. The yelling stems from little in the way of belief (“Spicer’s tradecraft places a greater value on loyalty than consistency,” the Post says), and it produces little in the way of results (check out Donald Trump’s press). Spicer can’t even win personnel fights. Not only did he lose out for chief of staff, last fall he got bounced off the negotiations over candidate debates. The person who bounced him was the chief of staff.

The Nerf ball warrior yells at women and makes children cry and doesn’t have the backbone to crawl out from under Trump’s thumb. I suppose there’s some way in which he isn’t a miniature living replica of today’s Republican Party, but damned if I know how.