More, not fewer, burkinis are needed on French beaches. 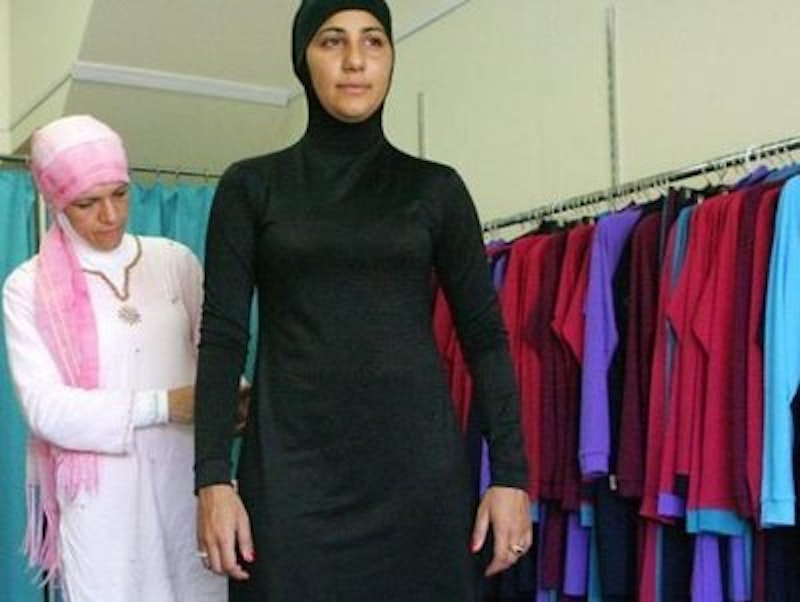 Washington Post columnist Kathleen Parker is concerned that France is abandoning its cherished concept of liberté now that some of its beach towns are banning the skin-covering swimsuit known as the burkini. Parker is biased, as she favors the burkini as swimwear. As she put it in her recent column, “Frankly I'd like to see more—not fewer—burkinis on the beach, especially for Speedo-lovers over 50. Guys, do you own a mirror? (Please don't send pictures.)”

The awkward attempt to shoehorn humor in falls flat, mainly because men aren't forced to wear burkinis as some Muslim women are. Muslim men, who seem to have serious problems with women’s bodies, have for many years explained to women that Western-style swimsuits are immodest, conditioning them so well that many actually believe they're exercising their free will when they don a burkini.

Islam, in fact, offers limited opportunities in the free will department for women. If you doubt this, take a look at an Iranian beach photo predating the Islamic revolution of 1978-79 and try to imagine a woman dressing like this at a public beach today.

Parker doesn't doesn’t exhibit any particular understanding of the French ethos or how the current uncertain situation in France is driving certain events. Terrorist attacks have made France a tense nation these days—a place where seemingly minor matters can take on added significance, and priorities get rearranged.

Inexplicably, Parker makes no mention of the staunch ideology of French secularism—laïcité—that's at the heart of French national identity and just as connected to the burkini issue as liberté. Contrast the American paradigm of an unspecified God sanctifying a secular republic with the French concept of a godless civil religion that worships the values of the republic. Then you can understand why the French are flabbergasted that American atheists feel pressured to keep their beliefs to themselves, and why Americans can't fathom how the French can tell Muslim women they can't cover their faces in public.

Parker’s headline bemoans the fact that, once again, the burkini ban is a matter of “men controlling women’s beachwear,” but she focuses on just the French men, while giving a pass to the Muslim men who impose burkinis on women. Attempting to demonstrate how Westerners can be smug and judgmental towards Muslim customs, she says that “less than 100 years ago” American policemen were telling women in Atlantic City they had to wear stockings with their swimsuits. If there's one person in France who believes this is relevant to their current reality in any way, I’d be surprised.

There are legitimate civil rights issues involved when governments start regulating what people can wear at a public beach, but France has already demonstrated a willingness to subordinate some personal freedoms to strengthen the social fabric. The right to wear a burkini in public might be the next personal freedom sacrificed for the “public good” in France, now that the seal’s been broken.

Sisco recently became the third beach town in France to ban the burkini, after a brawl allegedly sparked by teenagers taking photos of burkini wearers escalated to a level that drew a police response of 100 law officers. Whether the burkini is actually a threat to public safety or such events are used as a pretext to ban the garment is anyone's guess, but in the current environment the burkini-wearer faces a distinct disadvantage.

Kathleen Parker is offering a parochial perspective on a uniquely French issue from her Washington D.C. vantage point. French beaches are obviously not for her, as she writes about having issues with both Speedos and thongs. For some reason, she believes her prudish personal tastes belong in a discussion of ideas.

“Liberté ought to mean that one can wear a burkini on the beach,” Parker writes. While there’s an undeniable kernel of truth in that statement, it fails to capture the complexity of the matter from a French point of view.

French leaders are telling the people they need to learn to live with terrorism now, but that's not going over so well. To many in France, women covering themselves even at the beach demonstrates extremism. Parker's shallow analysis offers nothing that will help you understand what's really going on over there.