Polls Are a Political Dating Service

Seeking out coalitions, prejudice and bigotry. 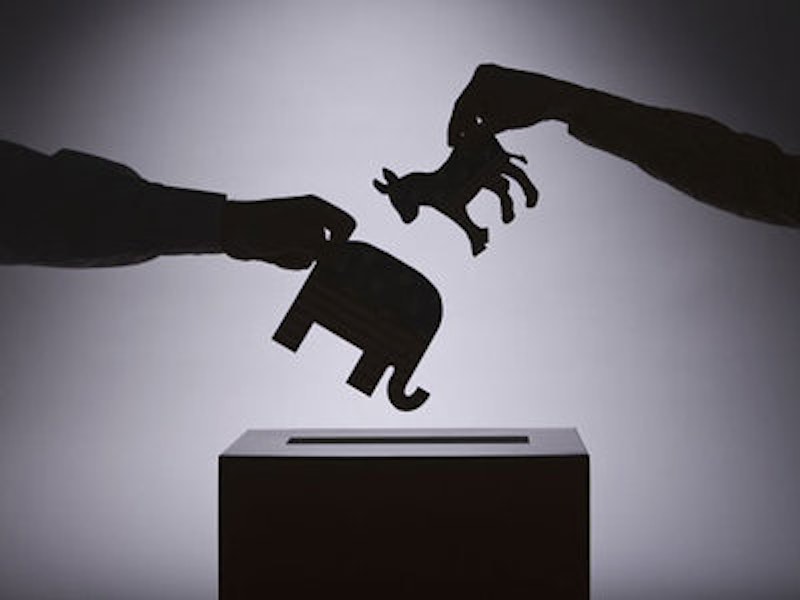 It’s late August, a couple weeks short of Labor Day, and already the electorate is being told not to bother voting in November because the presidential race is already decided. Why spend precious time, maybe hours, at an inhospitable polling place when headlines and polls are telegraphing the message that Donald Trump is in the dumpster and Hillary Clinton will snag the White House in a landslide.

That’s the undeniable news, directly and indirectly, blasting voters daily in this unruly and demonstrably unconventional election cycle in which one of the principals seems to be willfully imploding before our eyes. And the sentiment about turnout trickles down state-by-state and eventually to lowly local elections where the size of the voter turnout is crucial in a handful of swing states and the sum total equals the critical mass that determines elections. Squeezed between polls at one extreme and the Electoral College at the other, voters would seem to have little direct say in the choice of their president.

The names are as familiar as those of the candidates—Quinnipiac, Marist, Monmouth, Franklin and Marshall, to name a few of the more popular surveys. For colleges and universities, polling has become big business, right up there with athletics. Polls are not only revenue producers but they are also branding and recruiting tools for many academic institutions that would otherwise remain unrecognized backwoods campuses. State polls are more precise than national polls, and their inside numbers reveal the true depth of voter sentiment. There are many others, of course, Gallup the granddaddy of them all, with most of the major newspapers and networks either conducting their own polls or pairing with other media partners to ease the cost and broaden the reach. On any given day, at this point in the election season, there are likely to be a full handful of polls showing the same conclusion in varying degrees.

What gets lost are the mechanics of elections. They include the campaign structure itself, organization, which is the backbone of the voter delivery system, the media aspect of a campaign which has been uncontrollably expanded by the social media, and the money required to finance a campaign without which everything else is impossible. It’s important to remember that organization is the one campaign component that polls cannot measure.

Hence, early voting begins in many states in about five weeks. And by Election Day, this year on Nov. 8, about one-third of the vote will have already been cast. In 2012, for example, 32 percent of the vote was already cast by election day. (Early voting begins in Maryland on Thursday, Oct. 27 and continues through Thursday, Nov. 3.) In 2008, when President Barack Obama faced Sen. John McCain in the general election, the voter turnout was 61.6 percent. In 2012, Obama ran against Mitt Romney and the voter turnout was 58.2 percent, a drop-off of 3.4 percent from the previous presidential election. The historic high turnout in a presidential year occurred in 1964, 61.9 percent, when President Lyndon Johnson demolished Barry Goldwater in an ideological, anti-establishment contest that in many ways resembles the dueling between Clinton and Trump. Though comparisons suck, to roughly paraphrase Shakespeare, the lowest turnout since World War II occurred during the mid-terms in 2014 when only 36.4 percent of the voters bothered to show up, even with the helpful accommodation of early voting. Put another way, in that case 36 percent of the voters controlled 100 percent of the vote.

The popular vote, the turnout, can be uncomfortably close, with the occasional exception. In 2000, for example, Al Gore won the popular vote by 0.51 percent but lost the election, and the presidency, to George W. Bush in the Supreme Court. In 2004, Bush defeated John Kerry by 2.46 percent of the vote. In 2008, in a rare aberration from a close sideswipe, Obama turned back McCain by a wide 7.24 percent of the vote. And in 2012, Obama was reelected over Romney with 3.86 percent of the popular vote. So it doesn’t take a political scientist to discern the effect of a daily cascade of polls on a tight election.

Democracy is truly a remarkably facile instrument of governance, what with all the happy talk about diversity, equality and liberty. But polls serve a purpose other than determining the horse race. Polls group voters by their likes and dislikes, biases and bigotries, their strengths and weaknesses, their neighborhoods and precincts. Polling is a search for common denominators and algorithms. In other words, polls serve as kind of a dating service, or match-maker, between voters and candidates. And the candidates actually court voters according to their biases. Thus, campaigns work to get certain blocs of voters to the polls and just as actively try to keep others from exercising the franchise. And what can be more un-American than that?

We observe, then, that Clinton is working to assemble the Obama coalition of blacks, Hispanics and educated whites, while Trump is pursuing the redneck vote, i.e., the undereducated white blue-collar male vote. In a time of greater politesse, they were called Reagan Democrats. At the same time America preaches tolerance and brotherhood, candidates actively rely on prejudice and bigotry to make their cases and capture votes. That’s the schadenfreude of polarizing America as much, if not more, by candidates as by their supporters.

The polls now say that Clinton has breakout double-digit leads in Colorado and Virginia, the former where a mass of Hispanics has settled, and the latter where educated whites in Northern Virginia dominate the state’s vote. Both had been considered purple swing states. Maryland is no contest. It’s Clinton’s all the way. Though the state is two-one Democrat, voter turnout is key. The state is 33 percent black, the largest concentration outside the deep south, and makes up about a third of the state’s Democratic vote. But Obama’s not on the ballot this year as a draw, and there’s little on the ballot across the state to intensify interest. So the quandary is whether Obama’s vote-pulling magic will cling to Clinton.

But the big prize is a cluster of must-have battleground states—Ohio, North Carolina, Pennsylvania and Florida (and some include Nevada because of its bellwether history.) No Republican has ever won the presidency without carrying Ohio. Ohio is a rust belt state of displaced workers who’re all ears for Trump’s bullhorn anti-immigrant, anti-free trade, nationalist message. North Carolina was safe Republican turf until Obama showed blacks that their votes matter. And they count even more now that the courts have batted down discriminatory voting laws in North Carolina and other Southern states. Pennsylvania is really three states in one—Philadelphia, Pittsburgh and Alabama in between. For Clinton and Trump, the standoff is between the rust belt precincts of Western Pennsylvania and the white, college educated suburbs around Philadelphia. Florida is surprisingly close, a point or three in most polls, and Trump is very popular in a state whose demographics are changing rapidly. The white vote is down measurably, by about 400,000 by one count, and what remains in the panhandle and trailer parks has become more conservative and/or changed parties. Besides, Trump is a part-time resident who enjoys winters at his lavish waterside estate, Mar-a-Lago, in Palm Beach. Nevada? Here’s why: Nevada has voted for the winner in 24 of the last 25 presidential elections over the past 100 years, with Jimmy Carter in 1976 the lone exception. Most polls show a close race with a slight tilt to Clinton.

So the real story this year is several layers deep. Will two highly disliked candidates repel voters from the polls, or will voters feel obligated to choose the evil of two lessors? Will the fiercest of Bernie Sanders supporters swing to Clinton, protest by voting for Gary Johnson or Jill Stein or simply tune out and turn off? Can Clinton assemble and hold the Obama coalition? Will there be a significant cross-over vote? And will the presidential candidates be a drag on down-ballot candidates and cause a turnover in the Senate and, possibly, the House? It all depends on turnout. Published polling isn’t helping to encourage a rush to the polls.