The Freedom Caucus Wants No Trouble With Trump

Not so brave now, are they? 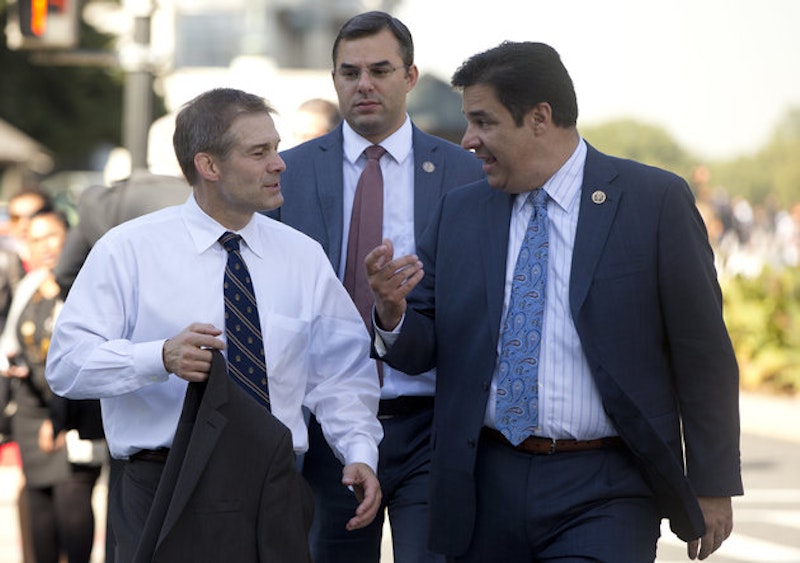 Donald Trump, The National Review says, “won more than two-thirds of all districts represented by Freedom Caucus members.” Even where he lost, he averaged 31 percent. As a result, the Freedom Caucus walks in fear of him. Oh sure, they sneer behind their hands. “Several months of conversations with Freedom Caucus members reveal a widespread contempt for the GOP nominee,” the Review tells us. The members call Trump “a charlatan who poses a threat to conservatism,” to use the Review’s phrasing. But that’s in private. When their names get involved, the fellows drop the nonsense and stand with Mr. Trump—38 members out of the caucus’ 39 have endorsed him. As Tim Alberta, the author of the piece, puts it, the caucus has “quietly fallen in line.”

The men of the caucus haven’t done that before. The group itself took form only last year, but the members have spent half a decade trying to grab the national steering wheel by placing a gun to the national head. For a House faction half the size of a pro football team, members have accepted few limits on their responsibilities. Most notably they decided Congress could undo signed legislation by threatening the country with default or by refusing to fund the government. They figured their love of the Constitution gave them the right to force this outcome. When their attempts fell apart, they blamed the regular Republicans. Those guys were a bunch of sell-outs too scared to fight, said the men of the caucus.

Now the caucus members are saying “Yes, Mr. Trump,” just like all the other scared Republicans. They’re even mad about their pal Ted Cruz and his convention stunt, his high-profile refusal to compromise. We know why they’re scared. This year the fellows ran into voters, their own voters back home, who were “simultaneously boosting constitutionalists for Congress and a strongman for president,” as Alberta puts it. Before this the caucus members had a safe road to walk. Compromisers were saddled with districts where Republicans weren’t the overwhelming majority. Caucus members, by contrast, were free to be brave. Alberta tells us the men “represent many of the darkest-red districts in America. Their average score in the Cook Partisan Voting Index is R+14, meaning a typical member’s district trended 14 points more Republican in the last two presidential elections than the country as a whole.”

But how do constitutionalists—small-government constitutionalists—wind up voting for a strongman? Here we have another omen of Reaganism’s end times. Caucus members have been brought low by “the crumbling of the conservative movement’s ideological foundation,” Alberta says. I think he means people have stopped believing the stuff. They’re ready to believe something else, like the need to battle the brown hordes under Warlord Trump.

Either belief involves hating liberals and being obstreperous, so voters back home have been willing to keep caucus members in office. But this year the voters in question had a choice, and their new loyalties have become clear. The next time a caucus member faces a primary, the opponent may play by Trump rules: hands-off entitlements, round up the brown, stop playing Uncle Sucker for NATO, say mean things about corporations. With no general electorate to worry about, the upstart may head full-speed down the Trump road. Will the caucus member follow? I think so. The caucus members think they’re heroes because of gerrymandering, and people like that aren’t worth a damn.