Get Rid of the Electoral College

End the tyranny of Florida and Ohio. 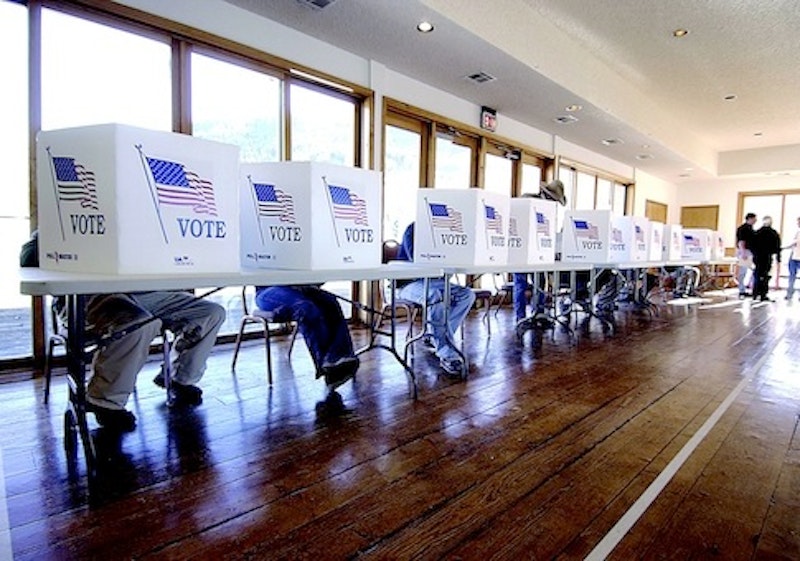 Every four years, Ohio, Florida, Colorado, Virginia, and Pennsylvania vote for President of the United States. The rest of the country, irrelevantly ensconced in red or blue, watches the media for news of the states that matter. Thanks to the wisdom of the founders and the miracle of the Electoral College, in presidential elections, the vast majority of Americans are assured that their votes are wasted. The nation is split into the small group that count and the big one that doesn't—which isn’t a healthy way to run a democracy.

It's true, as Jonathan Bernstein points out at Bloomberg, that "A national vote for a single office in a nation of some 325 million people just can’t be set up in such a way that one vote makes a difference." The 2000 Florida election was about as close as a national election can get, and the margin of victory was still about 537 votes. No one person changing a vote would’ve altered the outcome. Voting is a very small act of democracy, and its results are correspondingly very small. People who really want to affect elections canvas, contribute money, or organize. Voting in national elections is largely symbolic.

Still, democracy is built on norms and the assent of the governed—which is to say, symbolism matters. The United States' voting rate is abysmal; it hovers around 60 percent for presidential elections, significantly lower than other democracies. There are many reasons for that, including the high rates of inequality in the U.S. and a system of frequently divided government which makes politics feel unusually futile. But it can't help matters that every four years, the vast majority of people in the country who don't live in Ohio and Florida are informed that they're secondary citizens.

The Bernie Sanders campaign indulged in a particularly egregious example of this logic during the primary. Sanders got clobbered in the southeast, largely because of his weakness with African-American voters. In order to justify continuing his campaign, he and his surrogates argued that winning in the South didn't matter, since Southern states would overwhelmingly vote Republican in the general election. As it turns out, Hillary Clinton currently has a chance to win not just North Carolina and Florida, but Georgia and possibly South Carolina; Sanders' reasoning was completely off-base. But the existence of the Electoral College gave him an excuse to write off African-American voters.

In addition, the Electoral College can, on rare occasions, differ from the popular vote, as it did in 2000. This wouldn't have necessarily meant that Gore would have won in 2000; politicians tailor their campaign to the Electoral College, and with a different allocation of resources, the popular vote would probably have ended up differently. Maybe Bush would have won by 500,000 votes instead of Gore. But either way, the result would’ve been less tied to a few counties in Florida, and would’ve felt a lot more legitimate, and less alienating for voters.

The Electoral College was put in place to separate the president from the people, to make the choice of chief executive more distant and harder to affect. Electors no longer buck the popular will. But they still, in a smaller way, give people the sense that their votes for president are disconnected from the results of the presidential election. Getting rid of the Electoral College wouldn't immediately increase voter participation, nor would it necessarily eliminate unpleasant discussions about which voters matter. But it would be a statement that every person's vote carries the same weight. In a democracy with a long history of inequality, that's a statement worth making.