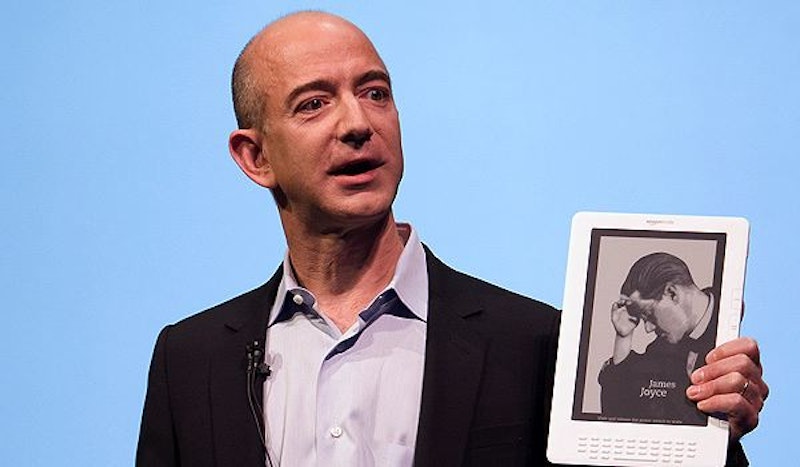 Sunday's New York Times published a takedown piece on Amazon. I don't expect objectivity from the NYT on this particular topic, and you could make a case that it was cherry-picked information taken out of context, like Twitter's Dick Costolo did in his tweet. I doubt that Dick is real objective on this matter either, so I'll take his lament with a grain of salt.

I'm far from objective myself on the topic of Amazon and Jeff Bezos. I'll leave the fawning over this great entrepreneur to sycophants like Charlie Rose. The Darwinian-minded Bezos represents the ugliest side of capitalism as far as I'm concerned. At this point, he's more of a cult leader than anything else. This is how he gets educated people to sign on to his house of pain.

Bezos, if you'll recall, is the corporate honcho who once had Amazon's "pick and pack" workers in Pennsylvania laboring in 100-degree workplace temperatures. Ambulances were stationed at the warehouse, ready to whisk away the weaklings who couldn't cut it. The ones with the "right stuff”—the happy Amazon elves—toiled on valiantly, hurrying through their timed bathroom breaks. Amazon stock investors were very impressed.

The Times article mentions an Amazon employee who once didn't sleep for four days straight. Another time she paid someone in India out of her own pocket to do data entry for her. Asking for reimbursement would presumably mean she couldn't cut it either. Skinflint Bezos' lovelight doesn't shine on the profligate.

Bezos is no wimp. He doesn't value harmony in his workplace and Amazon is no place for babies who need coddling. "Self-criticism," the Times points out, is at the heart of his management philosophy. Historically, where else has self-criticism proven to be a brutally effective management technique for reinforcing group cohesion? The Soviet Union, Mao's People's Republic of China, and the Khmer Rouge in Cambodia all come to mind. Now there's some heady company for Bezos, whom I can't help but suspect holds some fair degree of respect for these regimes and their "uncompromising" leaders.

Not for Bezos are the "country club" perks of other (soft) tech giants like Google and Netflix. At Amazon headquarters, employees pay for their food in the cafeteria and even parking is not free. What motivates otherwise sane people—those presumably with several options—to buy into this Spartan approach to conquering the marketplace? I can only guess some degree of masochism must be involved. Maybe the very faint hope of someday visibly pleasing the sternest taskmaster in the corporate universe is a giant brass ring for a certain needy type. In the process of chasing this elusive dream you get to work 80-hour weeks and reply to midnight emails too.

The article depicts Amazon as a totally data-driven firm. No surprise there, given Bezos' background on Wall Street in the computer science field. He's not interested in hunches. If you bring the wrong data to an Amazon meeting, you might leave the room in tears.

For some reason, Bezos neglects collecting data on the point of diminishing returns that inevitably ensues when an employee is asked to give up any semblance of a personal life. Returns are returns, even if they are diminishing after a certain point. If someone burns out, hire a new worker 10 years younger as a replacement and repeat the process.

I’m inclined to see Bezos as an Orwellian villain with a creepy laugh. The guy is insatiable. He won't be content until he controls every lemonade stand. Seeking his approval is a fool's game guaranteed to produce serious emotional distress. People invest their lives in Amazon so they can get a rare doll delivered in 30 minutes? Satisfying the whims of spoiled consumers in record time doesn't sound like much of a life's mission, worthy of sacrifice, to me.

Like any skilled cult leader, Jeff Bezos has the talent to portray his dystopia as a utopia. How else is he able to get smart people to work with such fervor and develop weasel traits like "diplomatically" throwing colleagues under the bus? If you work there, and hear they'll be handing out free Kool-aid soon, you'll know what to do. Don't forget to turn in your company-issued backpack first though.