Although if a recent Hillary puff piece wasn’t paid for, that’s worse. 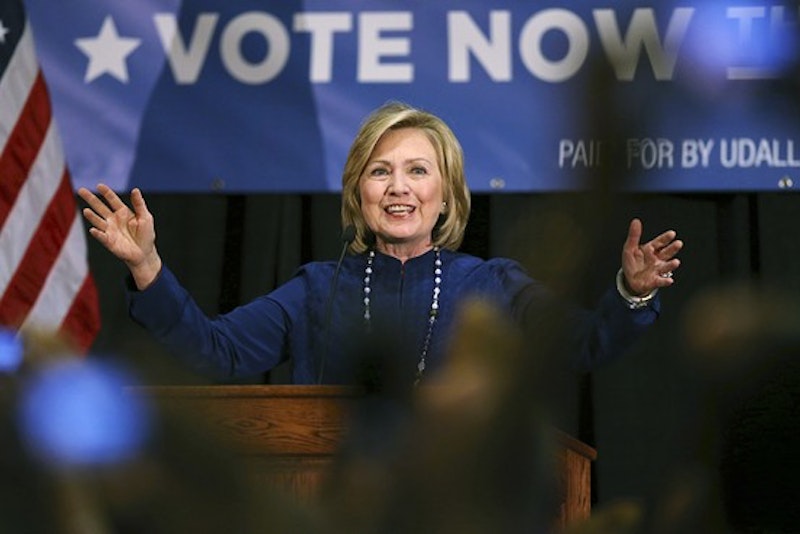 The New Republic’s print edition is mostly dreadful, its online content often incoherent or slap-dash, and its re-branding has flopped. At least the magazine isn’t offering subscriptions to a wine club, as onetime rival The Nation has, but that’s probably just a sign that owner Chris Hughes still has some money left.

Still, whatever dignity the publication once possessed has vanished. The latest example is Suzy Khimm’s breathless May 22 puffer on behalf of Hillary Clinton, a story that relies on five quoted Hillary supporters to complain that the media isn’t being fair to the Democratic candidate. Khimm, who joined TNR in April as a senior editor, doesn’t bother to contact a single newspaper or website to counter the charges—and we’re talking The New York Times and Washington Post here, not the Daily Beast—which at one time wasn’t cricket. Then again, I’m just mildly facetious in suggesting that Khimm’s story was paid for by the Clinton campaign—a “native” advertisement—which, in TNR’s current disarray, isn’t surprising.

Khimm doesn’t bury the adulation: her first source is a 29-year-old woman named Beth Lilly, who “remembers the first time she felt like the media was doing Hillary Clinton wrong: it was 1992, when [Lilly] was just about six years old, and remembers that people weren’t happy about Hillary’s chocolate-chip cookie recipe.” Now, that was small potatoes compared to husband Bill’s dissembling about dodging the draft and serial philandering, but no matter. “The press coverage was just so absurd,” recalls Lilly, who’s now a policy attorney in Washington, D.C.

Marvelous recall, Lilly! It’s a wonder the young woman, who also commented on the legitimate story over the questionable practices of The Clinton Foundation—“So her foundation took money. It’s kind of what foundations do.”—isn’t a household name. It’s not often you come across a six-year-old who dissects the press coverage of a political candidate. Khimm took the hard road on the way to this story for HRC’s scrapbook, a “happy hour” at some unnamed location in Arlington, VA. Jack Bardo, another Hillary supporter, told Khimm: “I wasn’t surprised—that’s what you’d expect in this media landscape.” I guess Bardo doesn’t consider it significant that his candidate stonewalled the media on her private emails, her knowledge of Benghazi or her taking of donations from millionaires who live in countries where women are treated like third-class citizens. Nor that this rapaciously greedy woman lectures the country about income inequality when she and her husband are notorious for grabbing every nickel from institutions who, for whatever reason, booked them as guest speakers.

Khimm admits that most of the people she encountered, unlike the prodigy Beth Lilly, have “hazy” memories of Bill Clinton’s tumultuous two-term presidency. So: “In sharper relief for them are the accomplishments that Hillary has racked up since then—U.S. senator, 2008 candidate, secretary of state—which her young Arlington supporters quickly rattled off when asked why they were backing her.” Talk about getting bought off cheap! Clinton’s tenure as a New York senator is notable only for introducing the noxious phrase “listening tour”; she lost in 2008; and maybe I’m missing something, but how exactly did Clinton make a mark as secretary of state?

In fairness, I’ve no beef with HRC’s stalwart supporters—that’s their choice—but how did a New Republic editor let Khimm’s tripe make it onto the web? Didn’t someone in charge suggest that perhaps the senior editor might contact an editor or reporter at The Times for a rebuttal to the criticism? Apparently not, which is why the story reads like a Clinton/2016 advertisement.