Yet another thing the Internet has screwed up. 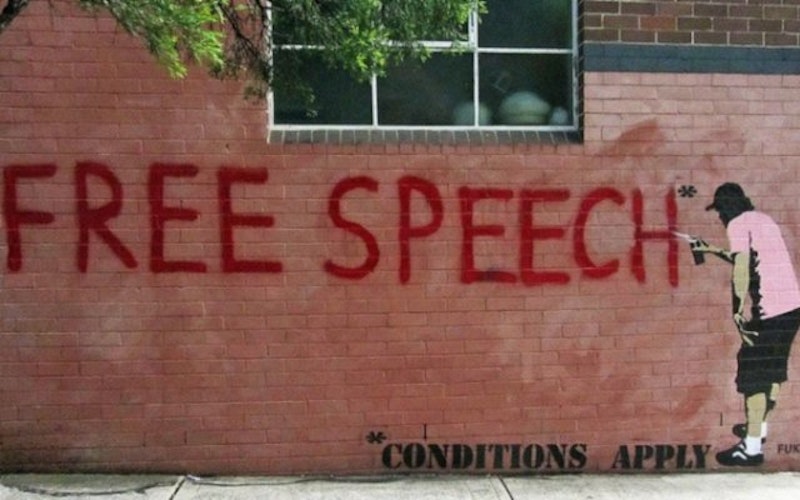 People used to feel that they ought to like free speech—not just their own, but anybody's. They might not like hearing what came out of other people's mouths, but they felt obliged to give a few dutiful cheers for the principle that allowed the nonsense to come forth. “I may deplore what you say,” they assured each other, “but I will defend to the death your right to say it.” Some delved down to the principle that underlay this tolerance. “No one has a monopoly on truth,” they said somberly. Nobody was at the center of the universe, so nobody had an especially good view. All viewpoints were necessary, and their input could be sorted out only by argument, a free-style collision of ideas, a never-ending debate marathon with no opinions barred.

Boy, has that changed. We hear heated talk about how free speech doesn't guard you against repercussions for your speech. If you're a talk show host, you aren't guaranteed to keep your job if you say something against gay marriage (or, I suppose, if you say terrorists who risk their lives aren't cowards, that Americans are cowards because they shoot missiles at far-off targets). If you're a bank teller, you're about certain to lose your job if you tweet something against Martin Luther King (or, I suppose, if you tweet that the financial sector is managed by greedy fools who would be criminals if the law weren't so cooperative). The idea isn't just that this will happen, because it always could, but that we're supposed to think it's a good thing. Some confused people even believe that direct suppression of speech—tearing down an obnoxious poster, for example—is just one more repercussion and doesn't really count as suppression.

After the Charlie Hebdo massacre, I was struck by the people who thought the victims ought to be honored for their work, work that appeared to be nothing special except that it occasionally flailed at Islam, Judaism and Christianity along with French political figures, and that it flailed in what seemed to me a way that was more hurtful than funny. (More caricatures of Jews and Arabs with out-of-control noses—oh, good.) Artists and professors assured each other on social media that the killings were a tragedy and a disaster, but not because people had been killed for expressing themselves. The idea was that artists expressing the right notions shouldn't be killed, and that Charlie Hebdo's notions were indeed right and only looked like silly junior-grade bigotry. The mourners couldn't process the thought that free expression is also threatened when anybody, just anybody, is murdered for expressing any idea, no matter what that idea may be. They couldn't process the thought that free expression, not just their kind of expression, is the important thing. “I  may deplore what you say, but I will defend to the death your right to say it.” Nah.

Here's another symptom: the growing insistence that the First Amendment is, simply, the First Amendment, the item in the U.S. Constitution that restricts Congress from interfering with what citizens say or believe. Well, I can't argue with strict usage. All I can do is point out that everyone knew the term's technically correct meaning but still went ahead and said “First Amendment” when what they meant was free speech. The amendment wasn't just a contractual item that cleverly kept Congress on the leash. It was the premier example of a principle the rest of us meant to live by as best we could. Now we don't.

One reason for the change: high-mindedness is a lot easier when you belong to a group that doesn't hear too many nasty things being said about it. In the old days, northern European heterosexuals with healthy bank accounts and a Christian faith could say whatever they wanted about other groups, and what the other groups said back rarely got much play. We are definitely better off now that the demographic ins are being challenged by the demographic outs. Now we really are getting input from all directions; the old model has become less of a model and more of a reality. But any order has its drawbacks.

Another reason for the shift is, of course, the Internet. Free speech looks a lot like an infestation of termites when a horde of obnoxious fools can plant themselves on your Facebook page, Twitter feed or in the comments section of the blog you like. Most of them aren't really there to express an idea; their true aim is to punish you with their presence, to make you suffer for saying something they don't like. Weeding out troublemakers is self-defense; even during the old days, a few hardy souls might plant a punch in the snoot on anyone who physically showed up to mouth off at them. Now that people don't have to show up and risk a snoot-punching, they swarm like bugs and leave their snotty remarks behind them. Victims can't be blamed for clearing out the mess. But the idea grows that any expression of an unwelcome idea is a mess of the same sort.

Personally, I'm against punishing opinion. But sometimes people are going to suffer for what they say, and there's no way around that. A teacher or executive or waiter or military officer who says they dislike blacks, Jews, whites, Asians, Catholics, gays, straights, men or women can't be trusted to act professionally toward all the people they deal with and therefore can't be trusted to do their job right; that person has to go. These exceptions can be multiplied many times. But there should still be more rule than exceptions. We should still want there to be more rule than exceptions. Seems like we don't.