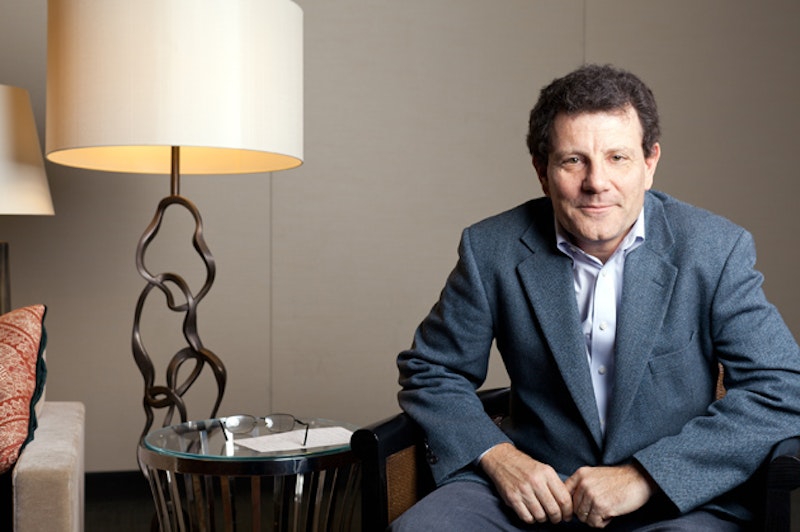 New York Times op-ed columnist Nicholas Kristof, called “the moral conscience of our generation of journalists” by Harvard classmate and New Yorker writer Jeffrey Toobin, traipses all over the world, writing stories about sex-trafficking and human rights abuses in countless countries, and on occasion gets back to the United States to take the political pulse. I’ve no reason to doubt his foreign reporting, which has won him accolades in the media industry, although it’s always difficult to decipher the accuracy of journalists who file from abroad; there aren’t many readers, including myself, who’ve been to Darfur or Chad. I remember once visiting a friend who was stationed in Cairo for a well-respected newspaper, and while he too was lauded for his Middle East coverage, he admitted to me it was somewhat misleading. “I mean, I don’t speak the language, and it’s almost impossible to figure out the cultural customs,” he said, “so I just do the best I can.”

This week, Kristof weighed in on “Polluted Political Games," intended, in his goo-goo way, as a wake-up call to American voters that money has poisoned the electoral process. No way! Hadn’t heard that before! Kristof starts his column by mildly criticizing the Clinton Cash Machine, citing Bill and Hillary’s large speaking fees, among other transgressions—and to his credit, the writer discloses that he’s moderated “many panels at the annual Clinton Global Initiative.” He wonders, like many Democrats, “What were they thinking?”

That squib of non-partisanship out of the way, Kristof then scolds Republicans Chris Christie, Marco Rubio and Jeb Bush for taking money and perks from wealthy people, and writes, “[T]he problem is not crooked individuals but perverse incentives from a rotten structure.” He blames the Supreme Court for its Citizens United decision, lobbyists who run roughshod over gullible members of Congress, and billionaires who pick and choose candidates to support, and finance. The only non-politician he cites is, but of course, Sheldon Adelson, who squandered $92 million on Super PACs in 2012, although Kristof neglects to mention that Shelly received no return on his investment. At least he didn’t lapse into a Koch Bros. rant, the usual go-to bad guys for liberals.

He continues: “I’ve covered corrupt regimes all over the world, and I find it ineffably sad to come home and behold institutionalized sleaze in the United States.” And then the kicker: Kristof speaks with former Clinton Labor Secretary Robert Reich—a man who never tires of lecturing Americans on how the elites (he’s in that category, at least financially) have made a hash of the United States. Kristof concludes his column: “Reich told me that for meaningful change to arrive, ‘voters need to reach a point of revulsion.’ Hey, folks, that time has come.”

I’m in favor of no-limit campaign donations, whether from an individual or corporation—although more transparency is needed—on free-speech grounds. But if the rules are changed, as is inevitable—a few Supreme Court choices by a Democratic president will surely strike Citizens United, for example—well, that’s politics, and those in power, or seeking power, will adapt. It’s not as if national and local politics suddenly became sullied by excess money in the past generation.

But it’s Kristof’s call for voters to revolt against what he says is a rigged system that strikes me as grade-school naïve. Americans do on occasion get disgusted enough by a barrage of negative advertisements—Democrat Anthony Brown blew a gimme gubernatorial election in blue Maryland last year by viciously attacking his unknown GOP opponent, Larry Hogan, who won by dint of sympathy rather than policy—but on the whole, they vote with their wallet. Barack Obama was victorious in 2008 not only for his undeniable charisma (and extraordinary warchest), but also because John McCain was an awful candidate and, more importantly, the economy was in free-fall. Obama defeated Mitt Romney four years later for the simple reason that the Republican ran an inept campaign. Democrats and Republicans come and go, in the White House, Congress and state legislatures: that hasn’t changed for all of Adelson or The Clinton Foundation’s money.