Maryland Democrats in a Pickle

A thin bench for future elections. 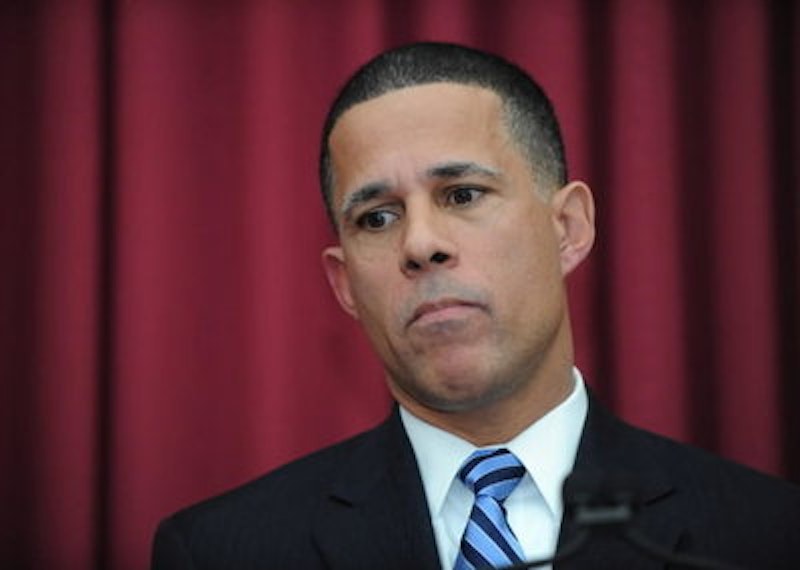 It’s early to speculate on the 2018 Maryland governor’s race, but if Democrats are concealing a secret weapon they’d better start strutting their stuff right now or Larry Hogan, in office only four months, will be the first two-term Republican governor since Theodore R. McKeldin Jr. in the 1950s.

Maryland Democrats have a shallow bench, if they have a bench at all, as well as a dearth of prime time candidates to recapture the State House in 2018. The line-up right now is slim to almost none. For those who want a peek ahead, whoever’s elected governor in 2018 will set the scene for a redistricting fight burdened with the outcome of the conservative Supreme Court’s steady chipping away at voters’ rights. The court has agreed to decide how to determine population—all bodies or only registered voters—in the shaping of Congressional districts and by a stretch the formulas that say how much federal money flows to states. The next redistricting maps will be drawn based on the 2020 census. The court ruling could also affect legislative reapportionment.

Redistricting is legalized bodysnatching. The court’s revisiting of the 1964 “one man, one vote” decision could further bleach an already white Congress by freezing out minority voters in the body count that shapes the size and coloration of Congressional districts. The effect could be disastrous for coastal states and urban districts where minorities—specifically undocumented immigrants—are packed into the population count. The last Supreme Court decision affecting minorities gutted Title IV of the Voting Rights Act.

The governor who’s elected in 2018 will have the first crack at redistricting. Though Maryland Democrats outnumber Republicans by more than two-one, their ranks of electables are remarkably depleted to a few recognizable names. Even those are not considered top tier candidates.

Begin with the leftovers from 2014 and only one stands out as a possible contender at the next rendezvous. She is Heather Mizeur, former Montgomery County delegate, who ran an effective campaign based on issues that are becoming acceptable as part of the mainstream political lexicon. She gathered a respectable 20 percent of the vote in a three-way race. She is openly gay at a time when that’s largely welcome and same-sex marriage is commonplace and supported by a broad swath of the constituency in a state that was among the earliest to legalize it.

Of the remaining two Democrats, Anthony Brown, the former lieutenant governor, in losing in 2014, forfeited all credibility as a competitive candidate for governor and is now running for the Congressional seat occupied by Donna Edwards. Edwards is attempting a resume upgrade to succeed Barbara Mikulski in the U.S. Senate. Similarly, Douglas Gansler, the former attorney general, has retreated to the private practice of law after running a botched campaign remarkable for its blunders and missteps. Neither Brown nor Gansler is likely material for a re-run.

Comptroller Peter Franchot, now in his third term as the state’s tax collector, appears to have settled into the Louis L. Goldstein groove—the assumption of an identity as comptroller for life. It’s a comfortable gig with very little heavy lifting, and once a month Franchot has parity with the governor and the state treasurer when he casts an equal vote on the three-member Board of Public Works. Franchot would have to be mighty adventurous to risk giving up the job for the uncertainty of a campaign for governor.

To be sure, Brian Frosh, the newly installed attorney general, doesn’t seem inclined to give up the statewide office he fought so hard to win after many years in the General Assembly as a senator from Montgomery County. Like Franchot, Frosh, with time, will likely settle into his new job and weigh the lifetime political security against the perils of a shot at being governor.

And there doesn’t appear to be any Democrat in Maryland’s Congressional delegation inclined to abandon a seat to run for governor. Ditto the General Assembly where no one has risen to a level of prominence that would translate into the makings of a statewide candidate.

Beyond the state level, the executives of the state’s four major subdivisions—Baltimore City, Baltimore County and Prince George’s and Montgomery Counties—are often considered contenders for the State House based on their records and experience as administrators. (Martin O’Malley, Parris Glendening and William Donald Schaefer all emerged from local executive suites.)

But the stains and strains of local government have ensnared at least two, if not three of them. Baltimore Mayor Stephanie Rawlings-Blake is besmirched with the burden of the recent riots in the city of stark economic contrasts—extreme deprivation at one end and a lavish horizon on the other.

Rawlings-Blake’s response to the mayhem has been questioned and the daily headlines about destruction as well as the street violence and shootings have prompted serious questions about her governance. Rawlings-Blake might even draw a serious opponent if she runs again in 2016. Though Rawlings-Blake often seems at a distance from her constituents, the critical mass of Baltimore’s vote is the black matriarchy that’s the source of the mayor’s political staying power.

In Prince Georges, Executive Rushern Baker was elected as a reformer but has met determined resistance in a county where the old way of doing business is firmly entrenched. Most recently, he attempted to raise taxes to fund schools but was forced to back down to half the proposed amount and even that compromise was rejected, leaving Baker embarrassed and vulnerable.

Montgomery’s Isaiah Leggett, former chairman of the Maryland Democratic Party who once considered running for governor, is, at 71, the oldest of the major-county executives and getting beyond the age of candidates for governor in an era of generational change. Leggett’s biggest challenges these days are the county’s budget and the Purple Line that would link MoCo and PeeGee, which is provoking the customary dueling views among his highly engaged constituents. Hogan has promised a momentary decision on the rail link.

Finally, Kevin Kamenetz, the young executive of Baltimore County, who doesn’t appear ready or willing to run for governor even though he’s mentioned here because of the size of the county he governs. Baltimore County is vast in geographic area and a contrast in demographic and political makeup. It’s liberal on the west side, conservative on the east side and Republican in the middle. Governing Baltimore County is a balancing act best accomplished by keeping taxes stable and the roads plowed, which Kamenetz has done.

So Democrats find themselves in a pickle. They’re out of office, there’s no heir apparent and as yet nobody waiting to be designated. For the first time, in a long while, there are too few eligible Democrats instead of too many. As if to underline the point, one political insider shrugged and said: “Don’t worry. Somebody will come along.”