The Naked and the Nude

How should we analyze Sulkowicz's statement? 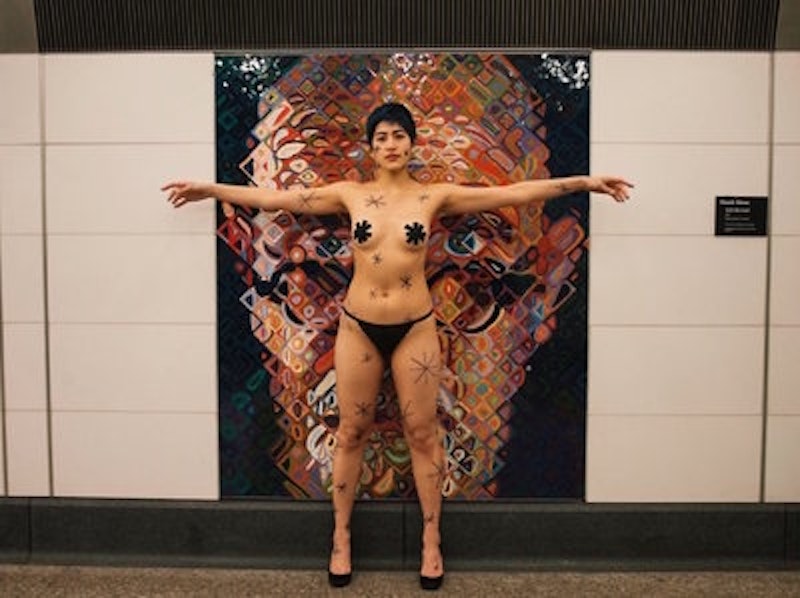 This week, the art world’s seen yet another example of absurdity on parade. Emma Sulkowicz, known for carrying a mattress at Columbia University to protest the school's response to rape allegations, has made another supposedly artistic act. This time, she decided to protest artist Chuck Close by standing almost naked in front of his art works at the Met. Close was recently accused of sexually harassing his models because he allegedly made disrespectful comments, one of them that he told a woman her vagina “looks delicious.”

Sulkowicz wore only a pair of black panties and covered her nipples with a bunch of pasted-on asterisks. She simply stood there while a photographer captured shots of this “brave” and “raw” performance. Although Close was her main target, Sulkowicz didn't stop at that. She paid a visit to MoMA and stood in front of Picasso's Les Demoisselles d'Avignon. Of Picasso, she said that his “main conceit are these lines that chop up women's body. It's kind of dismembering bodies to rearrange them as more visually appealing.” Does this statement even make sense?  It has nothing to do with art as a discipline and it’s a poor evaluation of Picasso’s art.

How should we analyze Sulkowicz's statement? Is it political? Social? Artistic? Of course, performance art is nothing new. One of the pioneers is Marina Abramović, often described as the “grandmother of performance art.” She’s known for pushing boundaries, which was quite clear in an exhibit she staged in 1974 called Rhythm O. In it, she chose to present herself as an object. Abramović spent six hours on stage at the Studio Morra in Naples, while public spectators made a decision to humiliate and abuse her body. They used objects that were provided by Abramović, and in one of the photographs she’s weeping, while her naked body is covered with various objects, one of them a thorny rose.

Sulkowicz is not willing to feel that kind of pain so she opts for the less brutish route. As far as her performance goes, this really doesn’t reach the depths of Abramović's play with social and political reality, however we can conclude that both performances have elements of disorder, are devoid of beauty, and have engaged in a deconstruction of humanity.

Sulkowicz has essentially dehumanized herself by standing naked in front of the chosen paintings. I’d venture that she’s really not much interested in the actual healing of victims of rape or sexual assault. Rather, she’s looking for attention, and this does it.

She may be nearly naked in front of our eyes, but she is not nude. To be nude is to be vulnerable in front of others, even if we are clothed. Anyone can be naked and her nakedness has created the opposite effect of her expectations. She hasn't revealed anything about herself, despite the nakedness. We witness someone whose naked presence actually closes off any communication with the rest of humanity because we do not see her in a state of vulnerability. Rather, she’s a mere spectacle who will never be timeless.

By becoming naked in front of her spectators, Sulkowicz has annihilated the depth of eros. By rejecting the pornification of women, she’s turned herself into an object of pornography, which always moves toward immediate, repeated gratification and depersonalization.

One can argue that someone like Abramović and perhaps even Sulkowicz have proved a point by cleverly showing a triad of a relation: brutality-power-acquiescence. Fine. But once such “art” expressions enter into people’s consciousnesses and they get used to a deconstructive process of the entire world that surrounds them, the line between an ethical and an aesthetic act has disappeared. Suffering can continue indefinitely. The decision to treat the human body and mind as disordered ready-made objects that are nothing more than Duchamp’s urinal, leads to a rejection of the order of things. And more than anything, such art is dreadfully dull and forgettable.