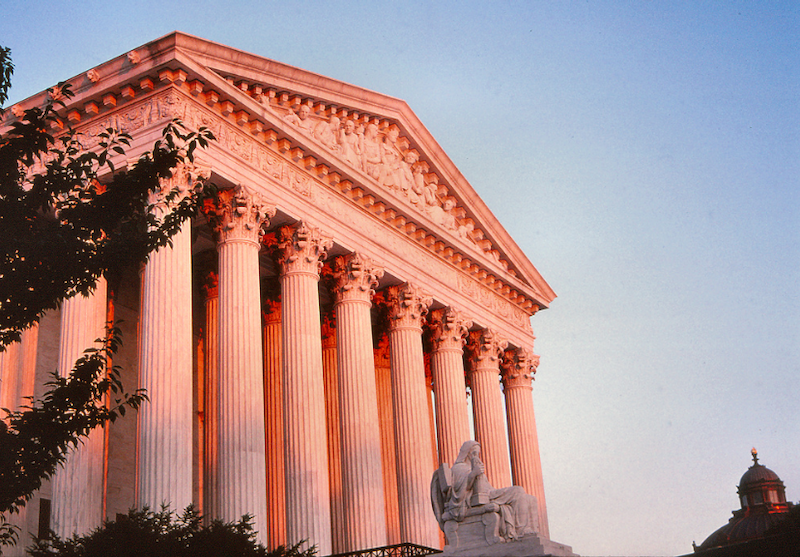 Ted Stewart’s latest book, Supreme Power: 7 Pivotal Supreme Court Decisions That Had a Major Impact on America, can be read in several ways, but if you pick it up expecting a neutral analysis of how the Supreme Court’s power has evolved over the years, you'll be disappointed. The author, a Federal District Court Judge appointed by Bill Clinton, chose his cases specifically to demonstrate the route the nation’s third branch of government has taken to enhance its power far beyond what the Founding Fathers intended. The reader gets a hint of of the author’s bias, which he makes no effort to disguise, from the book’s epigraph, a quotation from the 11th Chief Justice, Charles Evans: “We are under a constitution, but the Constitution is what the judges say it is.”

The author’s an Originalist. He’s in concurrence with former Supreme Court Justice Antonin Scalia’s assertion that the Constitution’s not a “living document,” in that it means what it meant when it was adopted rather than how society currently interprets it. If you asked Stewart to pinpoint the key (and perhaps darkest) moment in the history of American jurisprudence since the drafting of the Constitution, he’d probably say it was on the day in 1803 when the Supreme Court, with John Marshall as Chief Justice, ruled on the Marbury v. Madison case, which for the first time asserted that a court can nullify a law judged to be inconsistent with the Constitution, giving birth to the conservative bête noire known as “judicial review.”

From 1803 onwards, the conservative point of view is that the Supreme Court became empowered to insert itself, to the detriment of the American people, in every major area of American life, including marriage, abortion, health care, and civil rights. The author points out that the Supreme Court’s use of judicial review didn't become rampant until used on the Dred Scott decision in 1857, probably the worst ruling in its history, to declare that black people could not become U.S. citizens and that the federal government had no authority to regulate slavery.

On the well-known Plessy v. Ferguson (1896) case, Stewart offers an insightful analysis of a crucial ruling that upheld racial segregation until it was overturned by the landmark Brown v. Board of Education ruling in 1954. The court accomplished this stain on American history by accepting the principle of “separate but equal accommodations” for blacks and whites which ushered in the Jim Crow era. The author argues that, had the court used an Originalist approach, it would’ve concluded, “The state of Louisiana could not legally mandate separate but equal railroad facilities.” Instead it reinforced racism to the extent that, as Stewart puts it, there was an American caste system in place. In the absence of the Plessy decision, Stewart speculates, “the current discontent and division in American racial relations might be very different.”

Probably the least-known SCOTUS ruling on Stewart's list is Lochner v. New York (1905). Lochner, a business owner, was fined for violating the 1895 New York Bakeshop Act that limited the working day in bakeries to 10 hours. The Supreme Court justices upheld Lochner’s appeal, 5-4, based on his claim that there should be no limit on working hours agreed between employer and employee with a mutually-agreed-upon contract in place. This was a major setback for organized labor that one might expect the conservative author to be in favor of, but his real interest in the case stems from the fact that, in explaining their ruling, the justices took it upon themselves to define “liberty”—the same concept of personal liberty the Supreme Court would later use to establish the fundamental right to privacy with Griswold v. Connecticut (1965), and then springboard off of that to legalize both abortion, with Roe v. Wade (1973), and same-sex marriage, with Obergefell v. Hodges (2015).

With his breakdown of Wickard v. Filburn (1942), a ruling scorned by conservatives that would certainly be number two on Stewart's list of most influential and damaging SCOTUS rulings, the author explains how the court dramatically increased the regulatory power of the federal government. That power springs mainly from the Commerce Clause of the Constitution, which the justices essentially re-wrote with Wickard v. Filburn. Stewart argues that this decision would lead to the wholesale violation of John Adams’ philosophy that it's better to let many guilty people go free then prosecute one innocent, while empowering a power-hungry central government to federalize law after law that had previously been the exclusive purview of the states. The author writes that the Founding Fathers envisioned a national government with little authority over the people, “a system of government that no longer exists” because of Wickard v. Filburn.

On the Everson v. Board of Education of Ewing Township ruling, which reflected a broad interpretation of the Establishment Clause of the First Amendment that eventually led to such anathema to conservatives as the banning of government-funded nativity scenes, Stewart writes at length about how society needs religion to be moral, and how religious the Founding Fathers were. His anxiety about the United States becoming a secular nation is reflected in the John Adams quote he includes: “Our Constitution is made only for a moral and religious people. It is wholly inadequate to the government of any other people.” The religion he refers to is Christianity, so Stewart’s clearly stating that the Founding Fathers didn't mean for their document to include the millions of Americans who are not Christian.

Stewart doesn't approve of the Missouri v. Jenkins (1990) decision because it empowered federal judges to “raise taxes, manage school districts, and generally work their will,” thereby granting executive and legislative authority to the judiciary. “Does the end justify the means,” he asks, referring to the Supreme Court’s desire to curb school segregation with this ruling. Indeed, this question is the subtext of his entire book.

Finally, there's Obergefell v. Hodges (2015), which guaranteed the right to same-sex marriage. The author agrees with Antonin Scalia that “To allow...same-sex marriage to be considered and resolved by a select, patrician, highly unrepresentative panel of nine is to violate a principle even more fundamental than taxation without representation.” He feels that the Supreme Court cut off the democratic debate that the nation had started only relatively recently, making the law what five people thought it should be. Not mentioned: the fact that 67 percent of Americans support same-sex marriage.

Whether or not you align with Ted Stewart politically, his book is enormously useful in explaining why Republicans were able to tolerate almost any kind of behavior from Donald Trump if it meant one or more Supreme Court picks.