His military parade would be an unnecessary and extravagant spectacle. 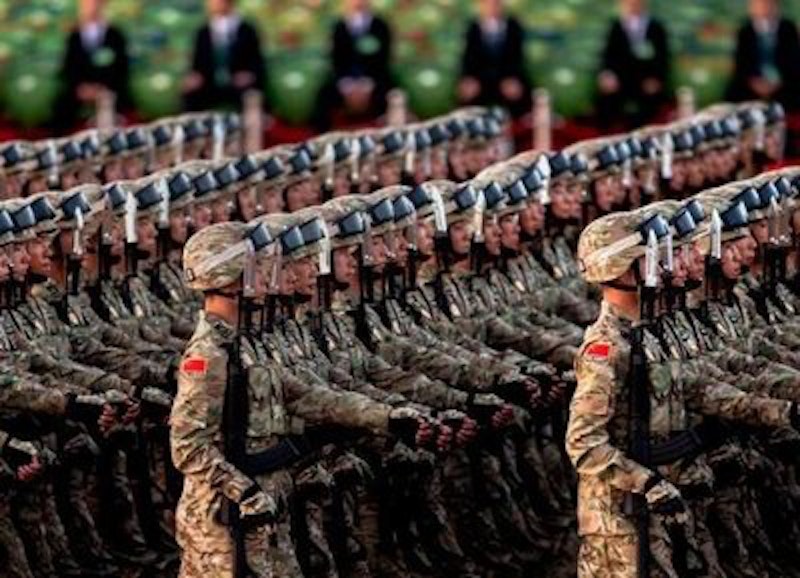 On the softer, less agressive side, there are the Macy’s Thanksgiving Day parade, New Year’s Day Rose Bowl parade and the daily parade down main street at Disneyworld—Woody Woodpecker, the Grand Marshall, Goofy and Mickey Mouse, sprinkling the air with fairy dust and make believe—that ineffable something that all of the above parades have in common: they make people feel good.

So now President Trump wants a splendid parade of his own down Pennsylvania Ave., the nation’s 5.8-mile grand boulevard, to pay tribute to America’s men and women in uniform—this from a president who dodged a military uniform five times during the Vietnam War for “heel spurs” and education deferments. We, the people, at least those with a pulse, surmise that a parade would not be recognition of America’s military personnel but a deadpan tribute to Trump, in an election year with miles of footage of Trump reviewing the troops for TV commercials. (The stretch of Pennsylvania Avenue that connects the White House and the Capital Building is 1.2 miles.)

We’ve seen this before, from balconies in Ancient Rome, 1930s Europe, today’s Asia and across the steppes of Russia in Moscow. And on the eve of the Winter Olympics, Jong-un tried to upstage the games by putting on another televised display of his missile launchers, goose-stepping soldiers and sword-dancing women’s brigade.

There’s also a faint recollection of a network interview with an aged Russian far outside of Moscow who observed, “The parades on television are a joke because Russia is nothing but a nation of abandoned farms.” The parades, then, are merely the kinetic equivalent of a Potemkin Village.

Keep in mind that Trump called Democrats who didn’t applaud during his state of the union speech “treasonous,” and that he’s attempting by fiat or firing to transform the Department of Justice into his personal Praetorian Guard in pinstriped suits.

The story of Trump’s parade first appeared in The Washington Post, after which the White House press secretary, Sarah Huckabee Sanders, issued this statement: “President Trump is incredibly supportive of America’s great service members who risk their lives every day to keep our country safe. He has asked the Department of Defense to explore a celebration at which all Americans can show their appreciation.”

Trump’s inspiration was the Bastille Day (July 14) parade in Paris, as the guest of French President Emmanuel Macron, where tanks rolled, bands blared and troops strutted down the Avenue des Champs-Elysees as jets screamed overhead, billowing red, blue and white smoke streams, the colors of the French flag. But Trump’s real motivation may have been his years as a military school cadet when he participated in a Columbus Day parade in New York City.

Of his multiple deferments from the war, Trump has said that he “always felt that I was in the military.” And he told a biographer that through his five years at New York Military School, grades 9-12, he had “more training militarily than a lot of the guys who go into the military.” Tell it to the grunts who slop through mud and pass out from exhaustion on 25-mile full-gear hikes. And, for the record, recall that Trump challenged Sen. John McCain over what constitutes a hero, claiming that McCain didn’t qualify because he got caught by the enemy. (McCain’s Navy fighter plane was shot down over North Vietnam where he was captured and held prisoner of war for five years.)

The last military parade in Washington was in 1991 during the presidency of George H. W. Bush to mark the conclusion of the Gulf War. But arguably the most imperialistic pomp and pageantry by an American president happened at the 1973 inauguration of Richard Nixon. To introduce his second term as president, Nixon ordered the tailoring of special Prussian-looking uniforms for his honor guard and the composition of original nationalistic brass-band music to be played during the inaugural ceremony. A year later Nixon vacated the presidency, driven out by Watergate.

But now the District of Columbia’s government wants no parts of a Trump military extravaganza. They view the idea of a parade as more of an ego trip than a troop tribute. Besides, the cost of clean-up and road repair isn’t worth the rumble of tanks and missile launchers ripping up the Capital’s busy streets.

The nation’s top military leaders jumped to attention during a meeting a few weeks ago when Trump mused that he wanted a parade like the one in France, according to reports. When the commander in-chief speaks, the Pentagon listens. Visions of all that military hardware rolling through the streets of Washington must have made their hearts go pitter-patter. But such jingoistic displays don’t come cheap: Estimates for such a spectacle of the military-industrial complex’s nuclear toys run as high as $25 million.

Trump’s frequent praise of strongmen—ruthless dictators, really—raises questions about the intent of such a display of America’s military might when none is really needed. The world already knows this nation has the nimblest and best trained and equipped armed forces with the most destructive arsenal ever assembled. And those who brandish their arms and armies as public relations programs do not want to tangle with America’s warriors. The Pentagon, under Trump, is considering upgrading the nation’s nukes to give Trump and even bigger button than his recent boast.

Usually when Jong-un or Putin stages a parade it’s to distract their constituents from their nations’ internal problems and less to rattle the outside world. And it should be a reminder to Trump, lest he’s forgotten (if he ever knew), that civilians are the ultimate commanders of the military in America. But the Trump Administration has it backwards. Instead of civilians restraining the military, it’s the generals—those Trump refers to as “my generals”—who exercise a calming influence on this president and his Dr. Strangelove impulses. The president’s Trump-tailored suits don’t come with epaulettes. The only internal trouble America has is the chaotic White House and its petulant occupant. It’s a disorderly laughingstock.

It’s easy to say that Trump’s parade is just another distraction, in place of a Tweet-storm, to re-direct our attention away from the Russia investigation. The Nunes memo was a dud and Trump is blocking the Democratic response, Trump’ predicted “bombshell” about FBI emails failed to detonate and the White House is now consumed with its own internal cases of two separate allegations of spousal abuse by staff members—in addition to the dozen or more women who’ve accused Trump of sexual misbehavior.

Many current and former members of the military service, given the chance, would say thanks, but no thanks, to such an unnecessary and extravagant spectacle. That $25 million would be better spent on improving veterans’ health care, rescuing homeless and addicted veterans and relieving service members of the necessity of applying for food stamps to feed their families. That’s the proper way to say thank you.

—Frank A. DeFilippo was a trumpeter with Navy bands in Europe and the U.S. He marched and tootled in many military parades.