The book’s only incidentally about Trump. 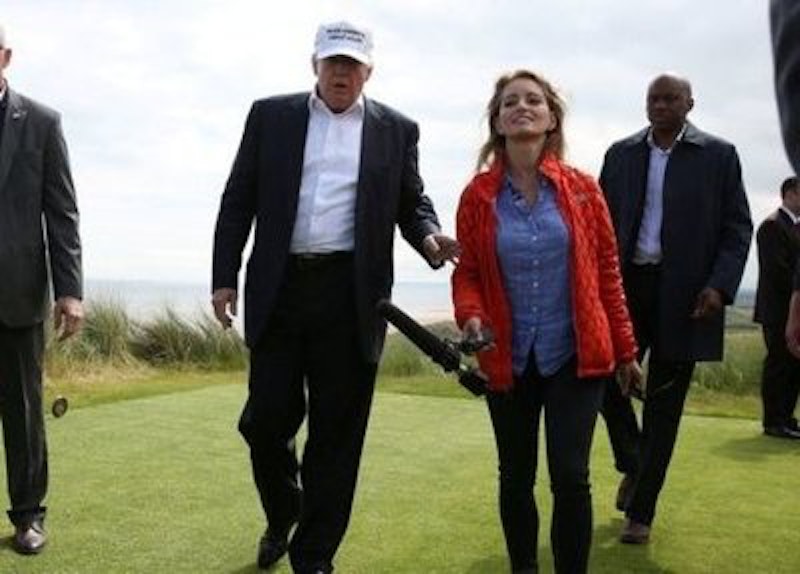 Politics moves fast in the age of Trump, and political writing even more so. A book about the American political world comes out, is mined by online commentators for anecdotes and incidents that prove their worldview, and by next week the book’s forgotten: covering crises from months previous, it already feels a decade out of date. That’s occasionally unfortunate. If some of these books are churned out to cash in on a story of the moment, other more important pieces of writing should outlast the freakishness of the day.

This brings me to Katy Tur’s Unbelievable: My Front-Row Seat to the Craziest Campaign in American History. It debuted on the bestseller lists and was well-reviewed on publication, but unlike a lot of the books that have already come out about the 2016 campaign it strikes me as having a lasting value. It’s important not because it reveals some new or surprising piece of news, but because it catches the sense of the moment. It reminds us how different things are now from the way they used to be. And it shows us, in one person’s life, how disorienting the changes can be.

Tur was an experienced journalist based in Europe with a Parisian boyfriend, who in 2015 was given the chance by her bosses at NBC to cover Trump’s campaign for the Republican nomination. She accepted, thinking it’d likely be a relatively brief assignment: “It will be six weeks, tops,” her boss assured her. But it wasn’t, and as Trump triumphed Tur stuck with the campaign, NBC’s embedded reporter in his camp throughout the 2016 election.

The book about her experience is structured simply enough: brief chapters from Trump’s election-night party alternate with longer recollections from the campaign trail. Tur writes tight and quick. The book moves fast, adding to the dislocation of the months she covers. It’s in large part about the making of the news, how reporters do what they do and what it’s like covering a presidential candidate; Tur gets across the sheer unsettledness and ephemerality of the process, the blurring of place and time that comes from shuttling from hotel to hotel, from arena to arena. The collection of instants that make up the book are individually bright and distinct, succeeding one another with minimal set-up or transition, an editing choice that gets across the disorienting feel of the campaign experience.

It’s a book about that sense of unreality. About chasing whirlwinds and sometimes catching them. About nights in bland hotels, evenings locked up in a pen among rallies of frothing Trump fanatics. About the exhaustion of being plugged into the constant stream of event that defines politics in the age of Twitter. (Tur recounts shutting off her phone once, for an hour; it happened to be the same hour Hillary Clinton had her medical incident at a September 11 memorial, sending the whole of the news apparatus into overdrive.)

Some of this simply comes from the nature of the job, and Tur does well in describing the practicalities of the profession—how TV news works, how covering Trump affects her career, even how America as a whole has changed how it views the news media over the years. But some of it comes from the specific nature of the Trump campaign, and how Trump approached his run. How he violated one norm after another, gaining publicity for himself without suffering meaningful blowback.

Here Tur might’ve been more critical of the media and how it conceives objectivity. It’s understandable that, as a reporter, she’d admire people like Andrea Mitchell and Chuck Todd. But it would’ve been useful to wonder whether they, and the media in general, were ultimately in part responsible for, even enablers of, the chaos she described.

Still, what comes through is the way in which Trump harnessed the weirdness of the moment, and fed it so that his madness became ours. Madness is method, deliberate or not; the problem’s less the madness than the viciousness behind it. Tur got to see that at all those rallies, and was spat on as she sat in a news truck. One gets a sense from her book how this rage and viciousness derives from the man at the center of it all, a man with whom she had to maintain a professional contact; a man who could be friendly to her one moment and attacking her on Twitter the next. Tur describes here what it is to have to deal with Trump over time. How one relates to a figure so mercurial, so pampered and entitled.

Again, though, the book’s only incidentally about Trump. He’s a character. But as I read Unbelievable what’s difficult to believe is the Trumpian method: the deliberate unloosing of the seals that locked away the devils of the American id. One thing follows another, and part of Tur’s point is how hard it is to retain everything, to build a coherent history out of all the impossible and ugly things Trump does. Defending Corey Lewandowski after he assaulted a journalist. Mocking the disabled. Urging people at his rallies to beat up protestors. Saying Barack Obama founded ISIS. It’s remarkably easy to forget about these things because he’s done so much more. As Tur says: “The unimaginable reduced to the forgettable and on again to the next thing.”

Tur’s own story is a necessary anchor as well as a frame. Beyond getting the campaign through her eyes we get enough of her background to establish who she is and why she cares about journalism; her upbringing and family are touched on and worked nicely into the story of the moment. More than that, Tur’s career choices give the book a center. Again and again she wonders if following Trump is what she wants to do with her life. Reading the book, you understand why. She’s advancing in her field, but her relationships are suffering and she’s losing a sense of place.

She finds a balance for herself. The rest of the world isn’t as lucky. We’re beyond Hunter S. Thompson these days; we don’t need anyone to show us the fear and loathing lurking in America and shaping its politics. Trump’s rise is the story of the fear and the loathing kicking in our front doors and smashing in windows. In days like these a sane memoir is important, and that’s what Tur’s written. It’s less political than reflective, and I wonder if as a result it’s less immediately useful for partisan purposes. But there’s more to life than partisanship, and much more to history: this book’s going to be a useful primary source to people in the future trying to understand what was going on in the Trump years.