What was so great about Buckley vs. Vidal? 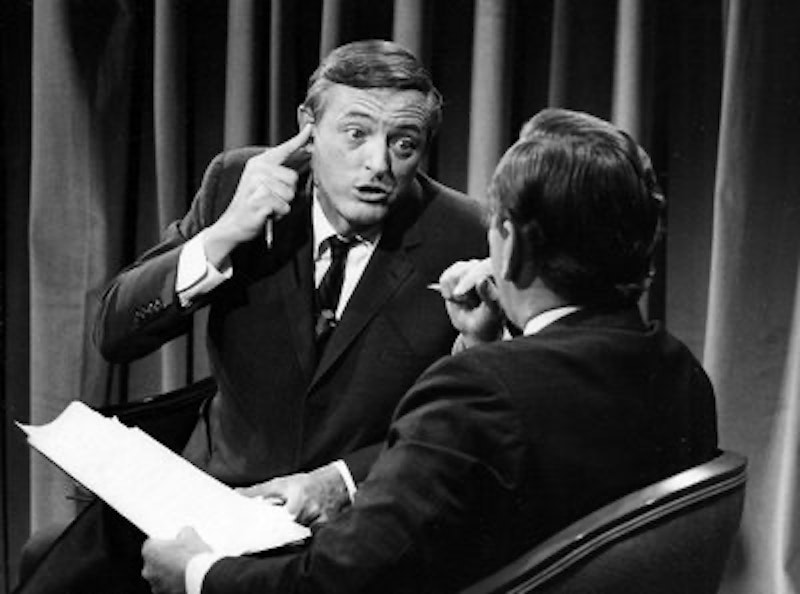 Richard Nixon had plans for his library. There’d be events, he said, “Great debates like—oh, Vidal and Buckley.” At least Gore Vidal says Nixon said that. The claim is in Palimpsest, Vidal’s chronicle of the many, many strange and famous people who have known his name. Of course, the quote might be genuine. Vidal and his enemy, William F. Buckley, were famous writers, and their debates were shown on network TV. To millions, Vidal-Buckley could well have been a brand name for intellectual cut-and-thrust. Nixon, proud of his brain but relentlessly banal, could have been one of those millions. And one must add that the debates took place at the conventions where Nixon and his chief opponent were nominated for president. That might help things stick in his mind.

I’m not brave enough to see the debates. The documentary Best of Enemies: Buckley vs. Vidal (available on Netflix) gives the highlights, and those range from so-so to dismal. Buckley says, “It seems to me the author of Myra Breckenridge is well acquainted with the imperatives of human greed.” Vidal says, “You must, I think, Bill, maintain your reputation as the Marie Antoinette of the right wing and continually impose your own rather bloodthirsty neuroses on, on the political campaign.” Buckley’s assistant tells the camera that ad hominem wasn’t her boss’ style. I think she means that crude insult wasn’t his style. On the evidence here, Buckley was plenty ad hominem and so was Vidal, in the sense that they talked about each other at least as much as they talked about ideas.

On Vidal’s side the ad hom included gay-baiting, as can be seen from the Marie Antoinette crack. On both sides there was a lot of “Oh yeah, you’re another.” This was translated into fancy darts of language, as by Addison DeWitt. “Cerebral diction” was television’s idea of being smart. Rex Reed and Tony Randall lived off such tricks, and Vidal and Buckley pulled similar stunts but with fancier loop-de-loops and loftier announced goals. Enemies says the debates were a hit, so I guess people got what they wanted. They saw the combatants’ rolling eyes (Buckley) and arched nostrils (Vidal), and enjoyed the stentorian prance (Vidal) or crafty sidelong shuffle (Buckley) of the sentences from the writerly mouths.

A high point for plain speaking and pertinence was this from Vidal: “But in actual fact you’re going to have a revolution if you don’t give the people the things they want. Now I’m putting it to you in your own self-interest. They’re going to come and take it away from you.” But the point’s been made often enough. A pal of Warren Beatty offered the same analysis when describing the star’s political leanings. The pal outlined the point casually, to a Beatty biographer, and not dramatically, to an audience of millions. But the intellectual level was the same.

This level is the top height for the exchanges in Enemies. More often Vidal and Buckley make points that high school students could make: America is a free country, so let people fly the Viet Cong flag; the Viet Cong flag is bad because the Viet Cong are fighting our troops. That topic was the occasion for the debates’ climactic exchange, where Vidal called Buckley “a pro-or-crypto-Nazi” and Buckley fired back, “Now listen, you queer, stop calling me a crypto-Nazi or I’ll sock you in your goddam face.” The fancy writers had gone sandbox and started tearing at each other, and it was in front of the country. American civilization in summer 1968: everything was coming down.

To the extent that people remember the Vidal-Buckley debates, it’s for this moment. I’ll point to another one on display in Enemies, when Buckley produces a letter from Bobby Kennedy that has an insulting joke about Vidal. Vidal asks to see the letter, and he’s smiling. Kennedy had been assassinated two months before, and Vidal was being reminded on TV how the dead hero had despised him. Vidal cares, but not in any way that we expect. The look of grateful, carefree pleasure on his face is so genuine that it seems private. He gives no mind to what the audience thinks; he’s remembering his enemy.