The Most Staggering Injustice 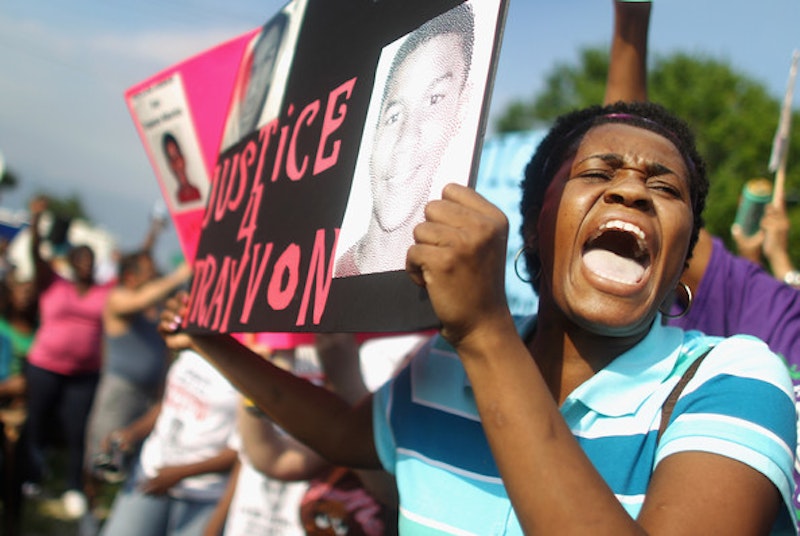 It’s hardly news to hear of a killer getting away with murder in the county that forgot Caylee Anthony. A grown man, George Zimmerman, in cold blood, murdered 17-year-old Trayvon Martin. I won’t say allegedly for there is no “allegedly” to be used here. The 911 tapes are more than evidence enough. But Zimmerman most likely will not be arrested for murder or even manslaughter. Is it a surprise that the case could already be ruined as the result of the botched job done on the night of the crime, considering the impeccable work performed by the men and women of Orange County, FL during Anthony’s murder case? This partial-birth abortion of justice has been carried out diligently with the intent to let Zimmerman go. The only reason an official or two have stepped down now is because of the unexpected level of public reaction. I say it’s merely a miscalculated effort to quell the anger of the masses.

Zimmerman, the son of a former Orange County Supreme Court magistrate, has had several scrapes with the law, and on more than one occasion has seen his case closed without trial. What I find strange is the assertion made by Robert Zimmerman that his son wasn’t following Martin despite his statement to the contrary on 911 tapes. Zimmerman is in hiding now, but not from the cops; he’s hiding from everyone who’d give him a taste of his own medicine.

Wasn’t Zimmerman supposed to spend a mandatory 72 hours in police custody for shooting someone? I guess maybe Orange County was just too preoccupied with an Occupy protest happening somewhere sometime to care about rules and regulations. Apparently he was also exempted from a mandatory tox screening. But that didn’t stop the brilliant men in brown from exhausting every avenue in trying to demonize the child victim in the matter.

It’s come out that Martin was kicked out of school (for days, not permanently) for being in possession of a joint. If that is justification for murdering a child, then we’ll have to put one between the eyes of every whitebread, middle-class kid in suburbia who’s ever been caught with a joint. Show of hands, how many of you reading this know of someone who, at any given time in their adolescence, could have been caught with a little weed? I’d also like to know which they feel is a greater crime; domestic violence or possession of marijuana. How about resisting arrest with violence. I could be taking it all out of context because Martin won’t be able to grow up into a possible life of crime. But that is the kicker. The child will never grow into a man and we’ll never know what direction his life would take.

There is no justice in Orange County. The murder of Martin is out of control. In reaction to public outrage the police have done everything they can to demonize the victim. We know nothing about Zimmerman’s lawyer, we have a suspicious lack evidence to prove Zimmerman’s case, the mountain of facts piling up are only going against him. There isn’t even a bill for George Zimmerman’s alleged bloodied nose; probably because there never was a bloody nose. But all signs are pointing to him never even being prosecuted or the police department having their wrists smacked for not doing their jobs. Zimmerman has gotten away with murder.