The Republican Party Prepares to Hate Itself in the Morning

Mitt Romney keeps wearing them down, this time with a win in Illinois. 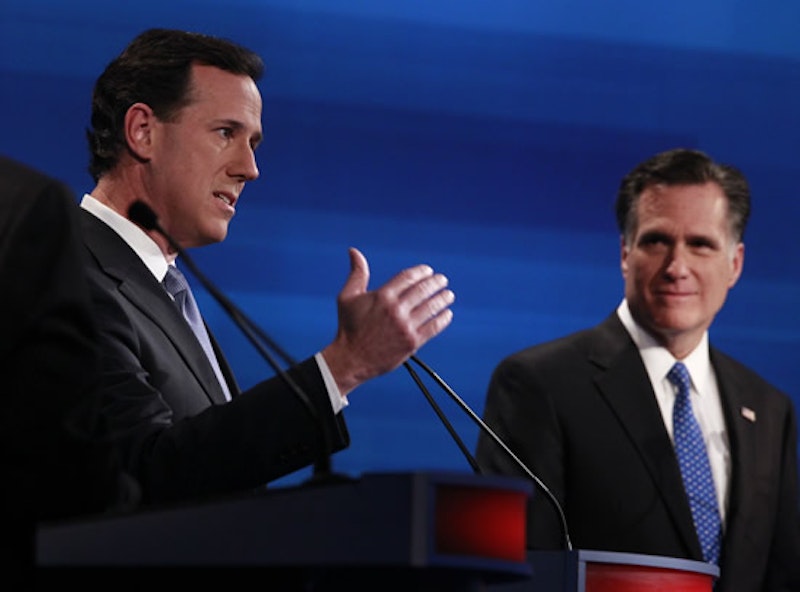 Let's say the Republican Party is a lady with the kind of self-esteem that comes from alcohol abuse and an obliging therapist, a dedicated fellow who earns his hundred-plus per session by reassuring her that her problems come from bad parents, incompetent coworkers, malevolent bosses, selfish former boyfriends, and badly designed jeans. Tonight the lady sits at her favorite bar, feeding her self-esteem, and sidling up on the stool next to her comes a sharp-tailored fellow with hair like the hood styling of a '50s Chrysler. He plants himself there and he doesn't go away.

The fellow should be a smoothie but isn’t. He keeps looking past her, he speaks with a nervous stop-and-start, and he makes jokes that only he seems to get. Worst of all (if I may borrow an idea from New York Magazine’s Jonathan Chait) he says things like “Of course, once your pants are off we can forget all this emotions stuff.” He seems to be practicing a reverse pickup technique intended to leave her flatfooted. It doesn’t work. On the other hand, he has money and he says all the right things about her parents, exes, coworkers, bosses, and jeans. The two other guys sizing her up are regulars whom she knows to be jobless and who are overweight and mouthy. The non-smoothie sure seems to have their number; he tells her everything down to their credit rating. And he stays. He may not make eye contact, but he’s in for the long haul and, God, it’s getting late.

We all know what the lady is going to do. But how does it make her feel? In other words, what’s the state of the Republican Party after Tuesday’s Illinois primary? At one end of the party there’s FreedomWorks, the wingnut group founded by Dick Armey. The Washington Times tells us the group won’t endorse Romney but will “stop looking for an alternative.” The group is tired of taking that hand off its knee.

At the other end there’s Jeb Bush, a Mr. Establishment who has finally decided to endorse his fellow Mr. Establishment. Catch the tone of his voice: “Primary elections have been held in 34 states, and now is the time for Republicans to unite behind Governor Romney and take our message of fiscal conservatism and job creation to all voters this fall.” Yeah, enough already. You have to pick someone, and there he is. Bush’s statement appears in The Washington Post, which also allows an unnamed Republican “operative” to offer subtext: “He’s lost any hope that we’ll have anyone better.”

So there you have it: “lost any hope” and “stop looking for an alternative.” It’s going to be a beautiful night.

The numbers. Get this: Mitt Romney won Illinois and the turnout was just 24%.  “It was the lowest turnout for a presidential primary in the past 70 years,” says the local CBS news. They mean in Illinois, of course. This year alone Virginia dropped to 6% for the epic faceoff between Romney and Ron Paul. The CBS story quotes an election official as saying turnout in Illinois was so low because the Democratic side lacked a contest “at the top of the ticket.” But in the past seven decades there have been other years when presidents were getting renominated. This year still managed to be special.

Anyway, the outcome wasn’t close: 47% for Romney, 35% for Rick Santorum, 9% for Ron Paul, 8% for Newt Gingrich. (Newt and Paul both figured the contest was out of their league and didn’t exert themselves.) Santorum is supposed to be the blue collar candidate, but he lost the $30,000-to-$100,000 voters by just a few points less than he lost the race as a whole. Admittedly the income slice ranges a bit high, into the middle management demographic, but buried in there is most of the blue collar segment as well. So far Romney’s collection of victories includes Michigan, Ohio, Massachusetts, and now Illinois. This year Santorum has won no industrial state anywhere.

On the other hand, Santorum just barely has a budget and a campaign organization. But there he is, kept afloat by the electorate’s reluctance to believe in Romney. This reluctance is especially strong among those who should be the party’s true believers. In Illinois, Romney lost once again among evangelicals and the self-described “very conservative.” To persuade everyone else into the corral, the Romney campaign and its allied super-PAC had to spend $3.7 million. That produces a per vote average of $8.53 versus Santorum’s $1.65. One is seven times greater than the other, but Romney sure didn’t finish seven times ahead of Santorum—more like a third, which is fine until you look at the dollars.

How about delegates? Yeah, he’s doing OK. By CNN’s count, Romney took 43 delegates in Illinois, bringing him to 552. That’s almost halfway. Santorum took 10 delegates and now has 249. If Santorum wants to win on the first ballot, he has to take 70% of all the delegates that are left. Romney just has to take 46%. It’s not sexy or romantic, but give him time. The Republican Party just wants to lie down.