Time to Lie Down, Republicans

The GOP sinks beneath the man with the haircut. 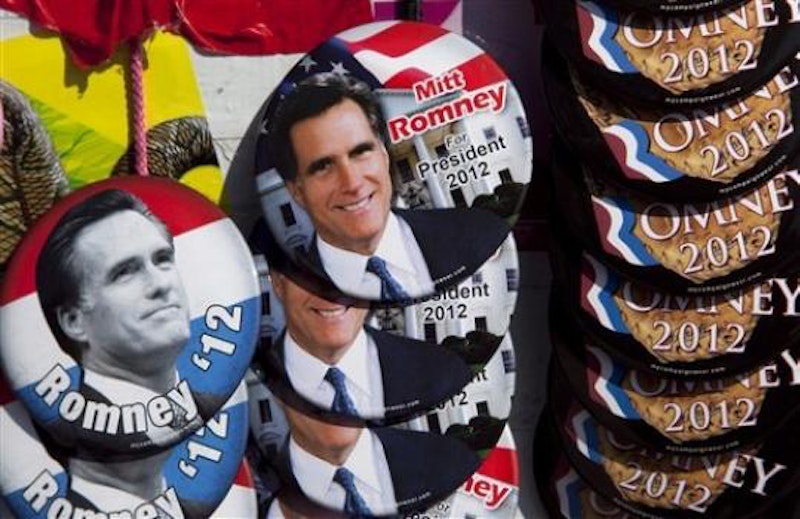 So that’s it, pretty much. The Republicans held three primaries on Tuesday and Mitt Romney won them all. That includes the biggest of the three, Wisconsin, where Rick Santorum had been running hard. According to CNN, Santorum outscored Romney among Wisconsin voters who couldn’t make up their minds until the day of voting. But it didn’t help him much.

Of the delegates that are left, Romney needs to win 43 percent. Santorum has to win 75 percent. For a while now his aim has been to keep Romney short of the total needed, then hope for the best on a second ballot at the convention. But the primaries are entering a phase where more states are winner-take-all: Come in first in a state’s vote, and you win all of the delegates that state has to offer. If Romney keeps coming in first, his delegate pickups will accelerate. And if Romney is still short when the states are done, there will be hundreds of delegates as yet pledged to nobody. At least a few will step forward to avoid a mess at the convention. They’ll put Romney over the top.

As of now Santorum stays in the race on the theory that it’s better to run for president than it is not to. Crowds, cameras, lots of chances to get his name out there, whether for speaking engagements, a book tour, or maybe a try at 2016. And he’s better off than Newt Gingrich, who was selling books early in his run and is now selling his autograph, like Marina Sirtis at a comic book convention.

It may be good or bad luck that Santorum’s next do-or-die moment will be Pennsylvania, which votes in less than three weeks. It has 72 delegates at stake, and twice its voters elected Santorum to the Senate. But they changed their minds the third time around and walloped him into the ground. If he loses, there’s nothing left for him to do. If he wins, he can scrape along to Texas and North Carolina and go out in a blaze of post-Confederate glory. After all, he’s the right-wing candidate and has done best in the South.

The numbers. Romney won Wisconsin with 44 percent of the vote to 37 percent for Santorum. In Maryland the score was 49 percent to 29 percent, and in Washington, D.C., it was 70% to 12 percent. Second place there went to Ron Paul. Santorum, whose organization has trouble with untied shoelaces, never got on the ballot. Of course, in Washington 12 percent of the Republican primary turnout translates into just 535 votes. The contest there tends to be quiet no matter what.

But Slate’s David Weigel makes a good point about turnout in Wisconsin. For months Democrats have been gloating and Republicans complaining about the reluctance of Republican voters to actually vote for anyone. But Wisconsin marks a change. Weigel: “Four years ago only 410,607 Wisconsinites voted in the GOP primary. This year, before the last numbers are in: 694,159. Santorum got more voting in losing the state than McCain got when he won it.” Enthusiasm? Could be. Per CNN’s exit poll, half the voters said they “strongly favor” a candidate. In Ohio and Illinois, the figure was 44 percent and 45 percent, respectively. Progress! What’s more, Romney easily won the “strongly favor” category in Wisconsin, taking 49 percent of that group. Of course, he scored the same figure in the “support with reservations” category. Santorum, beautifully, won the “dislike others” category.

Now it’s time for my favorite number. Disdaining the D.C. and Maryland backwaters, let us examine what Mitt Romney and his allies paid for each vote the candidate won in Wisconsin. The answer: $8.66. And for Santorum, how much? Answer: $2.42. When you think about it, more than two dollars per vote is still pretty high for a grassroots insurgency. But it looks cheap next to the Romney total, and the disparity between the two is actually less than in some previous primaries, where Romney outspent his challenger by seven to one.