Peggy Noonan Will Tell Herself Anything

But even she finds Mitt Romney a bit much. 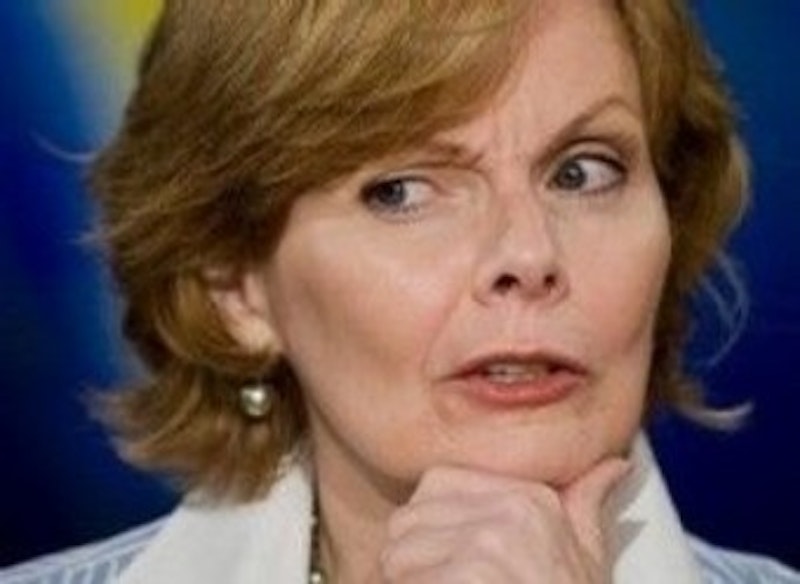 How bad has this year been for Mitt Romney? First, from ABC News and The Washington Post: “Thirty-four percent hold a favorable opinion of Romney, the lowest for any leading presidential candidate in ABC/Post polls in primary seasons since 1984.” Second, the 34 percent includes Peggy Noonan and she isn’t happy about it. She’s stuck there, given that she’s part of the GOP establishment and Mitt is the establishment choice. But the strain is beginning to show.

Her latest column for The Wall Street Journal is full of advice for the Republicans’ all-but nominee. The advice can be boiled down into two bits. First, stop being such a dipshit and be somebody else instead. Second, believe in something—it works! The column’s kickoff: “Mitt Romney is most frustrating.” Some highlights: “acts like a guy who can be captured… soft, chewy center… strangely uninflected… get off the goofball express.” The closer: You know who Mitt Romney reminds her of? “Mr. Obama.”

Think back to the fall. From a column in October: “A big Romney virtue is the calm at his core.” Core? How did that word get in there? Well, Noonan’s line was this: Romney has what it takes as a person and everyone can tell as much. In her words: “Mr. Romney’s added value is his persona. He’s a little like the father in one of those 1950s or ’60s sitcoms that terrorized and comforted a generation of children from non-functioning families… You’d quake at telling him about the fender-bender, but after the lecture on safety and personal responsibility, he’d buck you up and throw you the keys.”

Was there anyone else who had this reaction to the quavering, squawking, reedy-voiced man with the bent smile and fixed gaze? If so, and going by the polls, they amounted to no more than 25 percent of the Republican Party. An equal share was willing to back just about any random chump. At the time of Noonan’s column, the chump in question was Herman Cain, a flagrantly stupid nonentity. So Noonan shared this hunch: “some Republicans tell pollsters they like Mr. Cain as a way of keeping Mr. Romney in line—to keep him from daydreaming about who’ll be in his cabinet, to keep him scared and make him humble.” Warming to her theme, she began to sound a bit odd: “The Republican Party is going to make Mitt Romney work for it… They’re going to make him suffer. Because that’s what Republicans do.” We love Dad enough to hurt him.

Then the voting started. In response, Noonan came up with the world’s ballsiest adjective: “Mitt Romney’s victory in Iowa is underappreciated,” she wrote in a column. For New Hampshire, she came up with the world’s most unlikely adjective: “His victory speech, more like an acceptance speech, was powerful.” Rushing on, she added, “That speech will have positive reverberations.” Warily sizing up South Carolina, she put her chips on the table: “it’s likely he will win here.”

Some context for the above points. At the time of Noonan’s Iowa column, the “victory” amounted to eight votes with a recount pending. After the recount went through, the victory went away. Next, nobody remembers what Romney said on election night in New Hampshire. Third, South Carolina turned out to be the only primary won by Newt Gingrich, and he won it with a dozen percentage points between him and Romney. The blowout started the primaries’ current phase, the one in which the candidates wander from state to state while voter preference staggers about, looking for a place to die.

Noonan began this phase with something like her old optimism. Switching from unlikely adjectives, she tried an unlikely adverb. Gingrich had fumbled landing a place on the Virginia ballot, so the Romney campaign made fun of him with a good line. Noonan then wrote this: “Mr. Romney, breezily, to a reporter: ‘I think it’s more like Lucille Ball at the chocolate factory.’” Breezily! But she couldn’t keep it up. Soon she was fretting, giving Romney advice. He should give a speech in which he told America what it was like to be really, really rich. He should watch the “goofiness” (because of what he had to say about Michigan’s trees). He should… he should be a different person, a person who has beliefs. And that’s where we are now.

This series of episodes illustrates a truth about Noonan. Anybody who would put the word “breezily” near Mitt Romney has no respect for herself or anyone else. Everyone knew the Iowa margin was bupkis. Everyone knew what Romney had to say after New Hampshire was forgettable—they were the ones who had forgotten it. Above all, everybody knew that Romney (“I’m speaking! I’m speaking!”) didn’t come off in the debates as a sober, loving dad thoughtfully tamping his pipe. We could see the guy; we could hear his voice. Yet Noonan went ahead. We don’t know if she was singing her song to herself or trying out a story for the public. Maybe she doesn’t know. But she did her best before the stench of her candidate brought her down.

To sum up: Peggy Noonan is full of shit, but all the shit in the world cannot cover up Mitt Romney.