The Media and Hillary Clinton

The obsessive coverage isn’t a conspiracy. 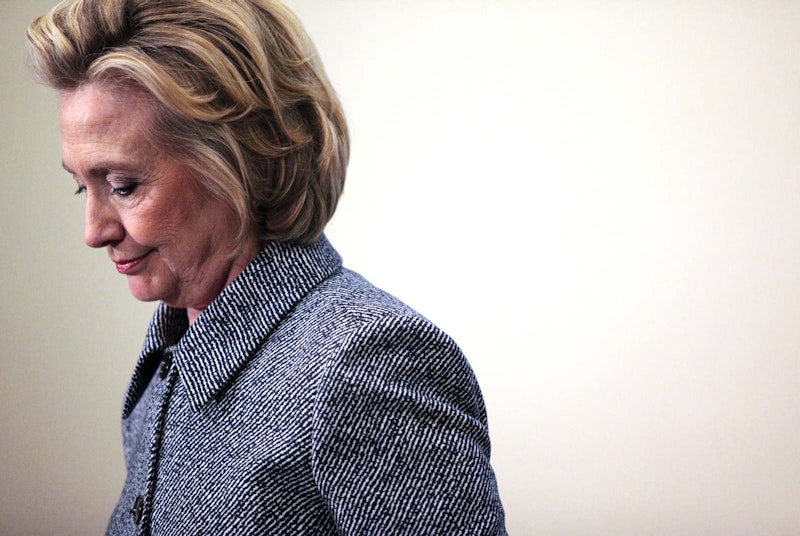 The mainstream media is a painful read for anyone with political commitments. News organizations are generally timid, and display a numbing tendency towards group-think. The press could, in an ideal world, draw attention to injustice, hold the powerful accountable, and champion the downtrodden. And yet, the media ignores these worthy goals to report on the doings of reality television stars. One suspects that "journalists" are doing it on purpose.

You can feel the frustration coming off Sarah Jaffe in waves in a piece for Fair and Accuracy in Reporting (FAIR). Jaffe is sick of the meme that Hillary Clinton is inevitable, and sicker still of the amount of time reporters spend on the Clinton campaign rather than on other candidates or, for that matter, actual news. "Despite the fact that Clinton has, at press time, yet to declare that she is running for any office, most of the media treats her candidacy—and frontrunner status—as a foregone conclusion," Jaffe declares. "Despite the fact that at present, she holds no elected or appointed office, having left her post as secretary of State on February 1, 2013, her every move is followed intently by the press."

The piece was published last November, before Clinton declared. But Jaffe re-shared it on social media this week, arguing that it is still relevant. Clinton, she maintains, isn't inevitable, and shouldn’t be treated as such. More, she suggests that the media is obsessed with Clinton because she is wealthy, "well-heeled," "centrist" and favored by Wall Street. Campaign coverage, she argues, benefits media organizations who need the campaign ad dollars. The media focuses on Clinton and portrays her as inevitable because they broadly agree with her policies and have a stake in an endless campaign.

Kicking the press is hard to argue with, but Jaffe's really confused. The idea that Clinton wasn't worth covering in November is nonsensical. Yes, Clinton hadn't declared her candidacy, but candidate declarations are formal hoops. Clinton's been running for 2016 since 2008. She has a very good chance of being our next president. What the next president thinks is important. Journalists who cover Clinton aren't manufacturing news. They're doing their job.

The coverage of Clinton can get ridiculous, as with recent reports on Clinton ordering food at Chipotle. But the media covers Clinton obsessively not because there's some plot to get the public to like Clinton, but because the public is already interested in Hillary Clinton. She's been a public figure for decades, and she currently has higher likability ratings than any other candidate running.  She's very popular—and even many people who hate her want to read stories about her because they enjoy hating her. Jaffe points to research showing that the media's ranking of important stories mirrors the public's ranking, and concludes that the media drives the public's sense of what's important, which I'm sure is true. But the opposite is true as well—the media covers what the public wants to hear about. If there's obsessive coverage of Clinton, it's in part because obsessive coverage of Clinton drives traffic.

Actually, if the press has any bias, it's against Clinton, not for her. That's not because people disagree with her positions. It's because the inevitable Clinton has been inevitable forever, and that's boring. The press wants excitement, because excitement means more readers, and because journalists prefer covering engaging stories.  There's nothing interesting about Clinton at this point; everyone knows who she is, everyone knows what she stands for, everyone knows that she has cornered Democratic support and forced just about every contender to drop out before the race even begins. The press, in other words, agrees with Jaffe, which isn't all that surprising, since Jaffe is a member of the press. The Clinton story is boring, her inevitability is boring: we all would rather talk about something else.

Unfortunately, Clinton is going to be the nominee barring a catastrophic scandal or a major health problem. Railing against journalists because Clinton has effectively won doesn't do much good for anybody. At best, it's futile. At worst, it leads the left down the road the right has taken—demonizing mainstream journalism, and creating a cocoon in which inconvenient facts like global warming or Democratic-leaning polls are attributed to conspiracy theories. I'm no particular fan of Clinton's, but the press isn't duping people by covering her. Like it or not, she's newsworthy.