Pissy Rand Paul and the Ladies

Not a New Wave act, a controversy. 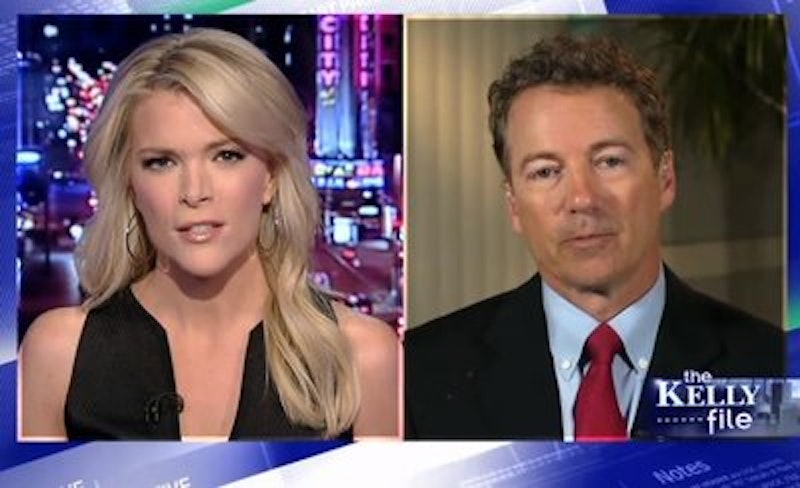 Megyn Kelly has a message for interfering males. “Well, I'll tell you this,” she says, pitching her remarks to Sen. Rand Paul. “Chuck Todd came out and said you have to be careful because you attacked two prominent female interviewers. The Guardian said you were condescending to female reporters. And I as a female reporter will say to Chuck Todd and The Guardian, we don't need your help. Savannah Guthrie doesn't need your help. Kelly Evans doesn't need your help. And you are entitled to push back on the interviewer just as much as you would if it were a man. So these male commentators can butt out.”

Rand Paul sits in his little screen. Kelly has just spent four minutes confronting him about his recent string of pissy interviews. Paul took it. “Yes,” he said when Kelly shot down his comparison with the righteously irked Ronald Reagan and the microphone Reagan paid for. A little later Paul said, “Well, I think we could all get better.” Now Kelly is covering her right flank. Apparently no one but a woman can ever criticize a man's treatment of women. Anyone else automatically becomes a white knight who wants to help the little ladies.

Of course, Chuck Todd didn't sound like a white knight (“But I think he's developing a—he's got to be careful here,” Todd said, his fingers doing a helpless dance not far from his chin), and The Guardian is a newspaper, not a man, so Kelly needs to give a byline. Even then her argument would be poor, given The Guardian's demonstrated love of sniffing right-wing error and its hard-to-detect interest in chivalry. All in all, Kelly is pulling the same sort of demographic foot-faulting (“You only say that because you're a” fill in the blank) that normally drives right-wingers around the bend. I guess this time they know it's all in fun. When a Fox babe blares about “male commentators,” the guys at home can chuckle. The libtards are getting theirs nuts crunched from a whole new direction. Snuck up on them!

Meanwhile, Rand Paul has his little purse of a mouth pulled up tight. Washington is taking his measure, and showing characteristic depth it has settled on a single word: testy. He uses it himself and adds another. “I think I've been universally short-tempered and testy with both male and female reporters,” he tells Wolf Blitzer. I could also suggest “irritable.” Even better there's “pissy,” because Rand Paul goes past irritable all the way to personally aggrieved.

“Part of the problem is that you end up having interviews like this where the interview is so slanted and full of distortions that you don't get useful information,” he says to the beautiful Kelly Evans of CNBC. She had asked him for his response to an article about possible dodginess involving his Kentucky ophthalmology group. With Savannah Guthrie, Paul said, “Yeah, why don't we let me explain instead of talking over me, OK?” Note that he was the person interrupting. At one point Guthrie's chin jerked sideways and her eyes squeezed tight (“No, no, no, you've editorialized,” Paul had just said), but she soldiered on. For her part, Evans displayed a serenity that I still find hard to understand. Paul: “So frankly, I think if we do this again, you need to start out with a little more objectivity going into the interview.” Evans: “I will certainly try my best, senator.” Was she killing him with class or being a doormat? I don't know, but she seemed unruffled. Not angry, not taken aback, not intimidated. Just serving up her questions, steady as Jeeves, and waiting patiently while the young master threw them against the wall. Of course, being a servitor comes with the job on CNBC. Larry Kudlow explained as much right after the Paul episode. He told Evans she'd been doing what she should, teeing up charges that the interviewee could take a swing at. Yes, Kudlow sounded like he was telling Evans how the job was done, but I think that's just how he talks.

Does Paul have it in for the ladies? Going by the few incidents being hashed about, he is ready to get pissed at anyone who asks a hard question, or even medium-hard. But with girls he gets pissed in a larger and freer fashion, or that's the data so far. A chap from the AP will get a brittle “I gave you about a five-minute answer. Put in my five-minute answer.” A Guardian fellow will see Paul's mouth give a little jump and his hand swing off to the side in a “that's it” gesture, followed by the senator abruptly walking off camera. (Reason: Paul had said there would be one last question. Then, after Paul answered, the reporter called out a fact contrary to Paul's answer. Because of this incident, right-wing bloggers are now certain that a question does not need a question mark.) But the two women get strafed as the words slip from their mouths. He won't let them talk, and he's lavish in his way of doing it. That finger to the lips—I've never seen a politician do that. Or any interview subject, really. But the girl got the treatment.

Reporters say Paul is more accessible than most of his kind. They say he'll stop in the hallway for a quick question and that quite possibly his answer won't be canned. After all, he got where he is by being good at talking. Yes, there's his father, but you don't go from citizen to senator just because your dad's name pops up in YouTube comments. The younger Paul has gifts. If only they were as big as he thinks they are. Opening his mouth is not a magical resolver of confusion; his conviction otherwise results in these fits of pouting and snapping when somebody's obstinate mouth keeps producing words that queer his pitch. If the Dems had anything like the GOP's footwork, they'd say Rand Paul was spoiled. That would flip the advantages of his quick rise and his father's name, and it would sync with the behavior people see on their screens. Honestly, though, the guy has put in some work. So I'd go with “pissy.”

As for the ladies angle, Paul may be the first interviewee to shush a national reporter. But he’s also the first man on TV to have a woman ask him the following: “Did you get overly emotional?” The person asking, of course, was Megyn Kelly, empress-idol of Fox's viewership and a lady who's on air to joust, not defer. Rand Paul didn't remonstrate; he just started talking about Reagan's mike. Apparently he's brave with some women, but not all of them.