Will Democratic Left Surge for O’Malley?

Probably not in droves, but the former MD governor can give Clinton fits. 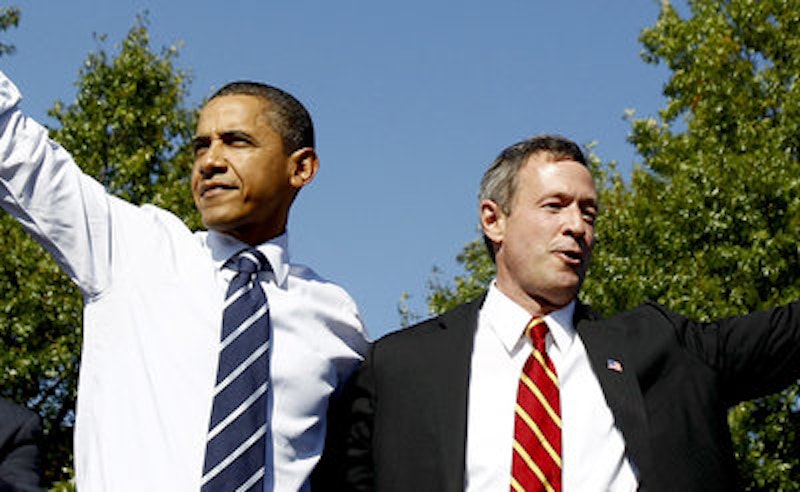 Politics is a form-follows-function kind of business. Begin with some Maryland numbers. They’re interesting to re-boot, but offer more insights than forecasts because they’re like comparing apples and oranges. This is the season of the long stretch, when most Democrats’ attention is fixed on Hillary Clinton, she of the platinum resume and, to a much lesser extent, former Maryland Gov. Martin O’Malley.

In the 2008 Maryland presidential primary election, Clinton collected 314,211 votes, or 35.8 percent, while President Barack Obama romped with 532,665 votes, or 60.7 percent. What’s interesting here is that O’Malley was the incumbent governor and he fully backed Clinton with the might of his vaunted political organization. O’Malley seamlessly switched allegiance to Obama after his primary victory and nomination.

But there was one ingredient missing. O’Malley’s political organization and skills were crippled by the defection of Maryland’s black vote, which comprises about 33 percent of the state’s population, the largest outside the Deep South. It voted 90 percent for Obama, about the same percentage that normally voted for O’Malley in his two runs for Baltimore and for governor.

By contrast, in the 2006 general election for governor, O’Malley pulled in 942,279 votes, or 52.7 percent, to Republican Robert L. Ehrlich Jr.’s 825,464 votes. Granted that Democrats have a more than two-one registration advantage, Ehrlich was, nonetheless, a sitting governor with an unusually high 55 percent poll-tested approval rating. The fine hand of O’Malley’s organizational skills was very much in evidence.

In that year’s primary election, O’Malley collected 524,671 votes to set up the general election challenge of Ehrlich while Ehrlich drew only 213,744 votes on his side of the ballot. (Maryland primaries are closed elections. Crossover voting is not permitted.) In their 2010 re-match, O’Malley’s vote was 1,044, 961 to Ehrlich’s 776,319, again putting O’Malley’s voter delivery skills on display.

Read into those numbers what you will, but the important take-away is that they reveal a politician who knows how to assemble a campaign and get out the vote on election day. And no single ingredient is more significant to a primary election than organizing and getting out the vote.

And now that O’Malley is a tentative candidate for president who’s set a decision date for May, he’s sitting at the bottom of the polls at anywhere from one-11 percent, depending on the survey. Even in his home state where he enjoyed enormous popularity for much of his two terms, a majority of voters say they would not vote for O’Malley for president. But that snub may be only temporary until voters recover from their anti-tax fever and realize what a president can do for his home state, especially one that’s joined at the hip with the nation’s capital.

Meantime, Clinton is riding high, consistently in the 60s in most polls but with a danger-zone negativity rating in the 40s. The main difference, at this point, between Clinton’s Bermuda high and O’Malley’s Mississippi low is recognition. Clinton is considered the most recognizable woman in the world. The high negatives are an accumulation of nearly 25 years in public life—as first lady, U.S. senator, candidate for president and secretary of state.

To the point of this exercise, both Clinton and O’Malley are trolling for votes in Iowa, where the nation’s first presidential primary test is more of a state economic development and tourism tool than a political event. Both have taken the less-is-more approach rather than a star splash by schmoozing voters in small groups in local gathering spots. The headline coming out of the starting-block Iowa caucuses can make or break a nascent candidacy.

O’Malley won his political chevrons organizing in Iowa for Gary Hart in 1984. Clinton lost the 2008 primary election, in part, on the organizational charts. Obama creamed her in Iowa. While her campaign was blowing off states they calibrated as losses, Obama was organizing his campaign by the nation’s 435 Congressional districts, which is where Democratic presidential primaries are won or lost.

So remember this. While Clinton was jetting around the world as secretary of state, O’Malley was chairman of the Democratic Governors’ Association for two years and after that its main fundraiser. That perch gave him access to every Democratic-controlled state house in the nation. At one point as governor, O’Malley named his brother, Peter, chairman of the Maryland Democratic party, an entry to all 49 of his peers across the country. Those are the building blocks of a political organization.

It would also be foolhardy not to note that it is doubtful that O’Malley can defeat Clinton in a head-on competition. But he can certainly give Clinton a fit if he decides to run, all the while waiting to see if Clinton falters. His zingers are getting sharper and more to the poisoned point.  He began weeks ago with:

“The email saga has cast a billowing political cloud over Clinton.”

“I think the presidency is not a crown to be passed back and forth between two families.”

His latest was a direct assault on Clinton’s flip-flop on the issue of same-sex marriage: “History celebrates profiles in courage, not profiles in convenience… The dignity of every person tells us that the right to marry is not a state right. It is a human right.”

O’Malley, as every political hobbyist knows, also had a change of mind on the issue and pushed a gay rights marriage law through the Maryland General Assembly. Clinton’s original position was that the issue should be decided by states. The Supreme Court hears arguments on the issue later this month. There is widespread speculation that the court will overturn state bans against gay marriage and render it, in effect, a nationwide law.

Clinton is the rare candidate who lives simultaneously in three tenses—past, present and future. The past is fraught with baggage that follows her around like tin cans tied to a dog’s tail. And her vision of the future is yet to be sketched in. Clinton’s candidacy is based, in part, on gender though her appeal to women voters as a bloc is questionable because of other concerns involving character and issues.

By comparison, O’Malley appears almost Kennedyesque, youthful at 52, a successful progressive governor who ran a squeaky clean administration and whose main transgression was that he raised taxes several times over to sustain Maryland through the years of national economic distress.

Clinton and O’Malley are both living in the populist echo chamber where, in this season of the beleaguered middle class, there is even squeeze-room for the gaggle of Republican candidates who are tripping over each other to resonate with socio-economic concerns.

There is, in this young century, a new Democratic party and an emerging new Democratic majority. Both reflect the shifting landscape of the presidential campaign. Many Democrats are yearning for an alternative to Clinton. And while Clinton’s brand of egalitarianism is still emerging, O’Malley is sprinting to the left to fill the vacuum left by the reluctant summa-cum-populist doyenne of the left flank, Sen. Elizabeth Warren (D-MA).

Clinton’s signature line is that the “deck is stacked” in favor of the one percent. O’Malley, expanding his liberal bona fides, unveiled an economic manifesto at Harvard’s Institute of Politics. As reported, he opposes the fast-track Asian trade pact, favors greater unionization, expanding Social Security and a $15 an hour minimum wage. And that’s about as far left as the Democratic Party goes these days.