With a visit by the Lone White Guy. 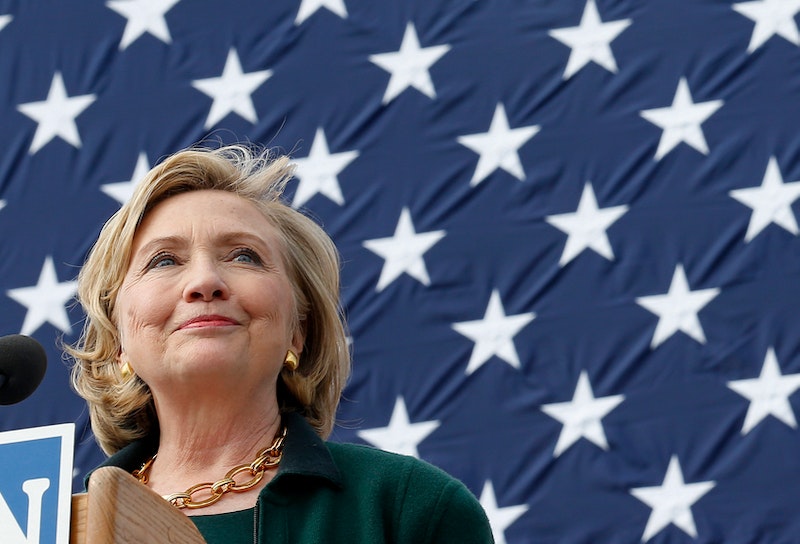 It's like an insurance commercial. A good one, but we're two-thirds along before we see anybody running for president. Until then regular Americans, many of them with great cheekbones, keep the eye busy by being regular Americans. “I'm getting ready for a lot of things,” a cheerful lady says. “A lot of things.” They're pushing alphabet blocks around with their kids, placing salt and pepper shakers on the tables of start-up restaurants, working at lathes, smiling at the camera. Everybody has a particular cute fidget—a head toss or hand flick—that gets thrown in to punctuate a thought. “After five years of... raising my children... I am now going back to work,” a young mother says, and she does a combination eye-pop and stiff floating gesture of the hands, to signal good-natured nervousness. “I'm getting ready to retire soon,” says a jolly fat lady, giving a thumbs-up. “Retirement means reinventing yourself in many ways,” she adds, because this is a beginning, not an end. A lovely Asian girl says she's on the hunt for a job. “It's a look at what the real world will look like after college,” she says, forward-thinking and self-reliant.

At last we get to Hillary. “I'm getting ready to do something too,” she says. Then, with a bob of her chin: “I'm running for president.” Everybody else is tackling that big New Year's resolution, and so is she. It's like Hillary is joining a trend. “I'm hitting the road to earn your vote,” she says, keen to avoid her 2008 error of looking entitled. Her announcement clip for her first run ushered the viewer into the candidate's presence like she was an affable American duchess ready to chat for one minute and 43 seconds. Now she's downgraded to pièce de résistance of an Aetna Life commercial about plucky folk, and she's on hand for just 57 seconds out of the clip's run. Everything she has to say about politics comes in a few sentences. “Americans have fought their way back from tough economic times, but the deck is still stacked for those at the top,” she tells us, because recovery is kicking in at last but Americans still remember what they learned post-Lehman. “Everyday Americans need a champion, and I want to be that champion,” she says. “So you can do more than just get by, you can get ahead. And stay ahead.” Pick your feet up and keep pace with the music, because America is getting ready to go.

Taken as a montage of the American scene, the clip is light on eagles, crags, cowboys, plains, jets, soldiers and construction workers. In fact there are none. The flag shows up quick, in the background of a couple of shots. These are of the only white guy to face the camera all by himself, one man only, no male fiancé clutching his hand, no dark-skinned wife at his side. The lone white guy is bulky, wears a t-shirt and has a shaved head, and he strides, arms out, around a machine shop where he's getting things done. Actually he looks like Joe the Plumber, who may have followed a paycheck to the Hillary camp.

The white guy's two appearances are strategic. He shows up, together with the machine shop and the flag, about five seconds into the clip. He shows up again a minute and a half in. The first time he gives way to a jolly fat lady (not the one who's retiring) who brags about her tomatoes while shooting us a sideways buck of the hips. The second time he gives way to Hillary, and it's the second time that he makes his pronouncement to the camera. “This country was founded on hard work,” he says, flag hanging in the rear of the shot. “And it feels really good to be a part of that.” Then the candidate comes on. The lone white guy gets just 10 or 12 seconds out of the clip's total, quite a comedown for his demographic. But that's still a good chunk compared to any other person's total, and his seconds count.

Yes, another part of the clip shows a young mother and her little girl flexing their arms and making muscles in a girl power tableau, and muscles are supposed to be the bulky white guy's domain. And near the end, Hillary's voice-over says, “Because when families are strong, America is strong“ just before two giddy lesbians bump foreheads on a sofa. One of the lesbians even has her own set of swollen though ill-defined arm muscles on display. But it's the lone white guy who puts the flag and country and hard work into the mix (okay, everybody else is undertaking constructive, build-your-future activities, but he's the one who says “hard work”). And he does so as the curtain-raiser to the pièce de résistance. Not bad, working-class white guy demographic. As so often when a new order pushes its way in, members of the old regime manage to grab some good seats for themselves.

After all the buildup, Clinton is just her usual self. She's always more charming than I expect from her press notices; even the duchess of 2008 seemed like decent enough company. But it's impossible to get excited at the thought of her mouth opening one more time. For this appearance, the only noteworthy thing about her is her jacket's subtly fascinating collar. It's shaped in a way I haven't seen before, like her throat was a notch inside a cone. The cone's rim, in a quiet way, climbs pretty high. You might not think so at first, but it comes within shouting distance of her chin. Is this a new kind of look? To me it has a world president feel, like we're bumping into science fiction. Hillary's team is trying to sneak in a bit of the uniform that the Earth Federation's First Magistrate will be wearing 50 years from now.

A collar like that is a new-style emblem of authority, similar to the highly placed shoulders that set off a male leader. Less obtrusive, perhaps because it's in a female key, but still there. A few decades on and it may be joined by a special pendant of office and a pair of ridged epaulets, and the person wearing the ensemble may speak for all the peoples of the earth as a menacing flying saucer floats atop the horizon. The person may be a high-throated woman or a serene Asian man with whiskers. But not a white guy, not from the movies I've seen. For the present we have Hillary telling us she's going to run for president like she was going to lose 15 pounds or clean the attic. I say it's the thin end of the wedge, but what the hell.

White guys haven't been doing such a great job of running things.