Krugman Hates Politics So Much He Writes About It Non-Stop

A voice just as dim as his Times op-ed colleagues. 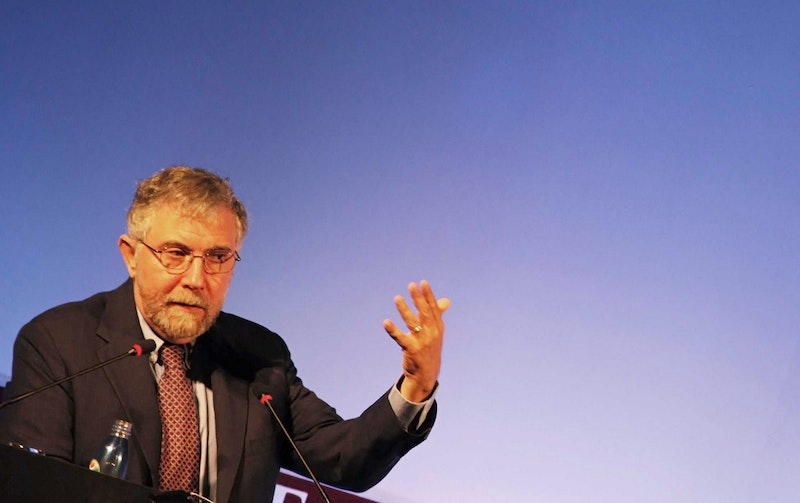 At one time I reasoned that reading Paul Krugman’s twice-weekly columns in The New York Times was like, as a kid, eating your vegetables before moving on to the meat or Sara Lee chocolate swirl cake. It’s once in a dog’s age that I agree with the fake populist—Krugman still puts no disclaimer about his own wealth when championing the economically disadvantaged who, unlike him, don’t own multiple dwellings—but any responsible conservative reader doesn’t rely solely on The Wall Street Journal for opinions of the day. But I’ve about had it with Krugman: he lost his moorings as a (mostly) economic writer when the Tea Party sprang up in 2010 and hasn’t yet recovered. I doubt he ever will. I’d rather read Greg Sargent in The Washington Post.

The latest example is Krugman’s essay on April 13, in which he denigrates fellow pundits—presumably NYT colleagues such as Maureen Dowd, David Brooks, Gail Collins and Ross Douthat—who focus on “personality-based political analysis,” instead of, you know, the real issues of a presidential campaign. That might’ve rankled Dowd (if she even reads Krugman), who’s made a handsome living comparing candidates to Hollywood stars and inventing silly nicknames for politicians. Yet Krugman is just as ridiculous in his own sober, judgmental way.

The following is from the mind of a loon: “[T]he influence of big money on Democrats has at least eroded a bit, now that Wall Street, furious over regulations and modest tax hikes, has deserted the party en masse. The result is a level of political polarization not seen since the Civil War.”

First the obvious: if Democrats have abandoned Wall Street as a bucks-for-influence ATM, apparently Hillary Clinton—barring a meltdown, the almost-certain presidential nominee of her Party—hasn’t received the message, as she’s embarking on a campaign attempting to raise $2.5 billion. And I doubt that sum will be comprised of donations from kids foregoing their school lunch money to put a woman in the White House.

More significantly, it defies belief that Krugman, who is 62—unless plagued by an unfortunate early onset of dementia—doesn’t remember the 1968 election, just to name one campaign that makes next year’s look mild by comparison. Talk about “political polarization”: not only were major cities torn apart by riots, a country stunned by the assassinations of Martin Luther King, Jr. and Bobby Kennedy, and the violence at the Chicago Democratic convention, but there was George Wallace capitalizing on the racist vote of the South (and helping Richard Nixon), while Democratic nominee Hubert Humphrey screwed by LBJ and hog-tied by the latter’s disastrous Vietnam policies. It was a country divided by the “silent majority” in one corner and the young activist “longhairs” in another.

Krugman either writes too much or is phoning it in, knowing that his adherents will study his words and repeat them at cocktail parties or on the golf course. How else can you explain the following sentence: “As you can probably tell, I’m dreading the next 18 months, which will be full of sound bites and fury, signifying nothing.” Clever! A Macbeth reference! Either Krugman believes he’s the first to do this, or else he’s trying to educate readers under 25 whose familiarity with Shakespeare is negligible. Of course, the amount of readers of that age who read Krugman might be able to fill a tattoo parlor in a gentrified Queens neighborhood.

Krugman concludes on a phony note: “One thing is for sure: American voters will be getting a real choice. May the best party win.” That’s simply insulting, as anyone who’s read the far-left Democrat realizes that Krugman considers 99 percent of Republicans as meth-addled hillbillies.