The Man With the MAGA Bowtie 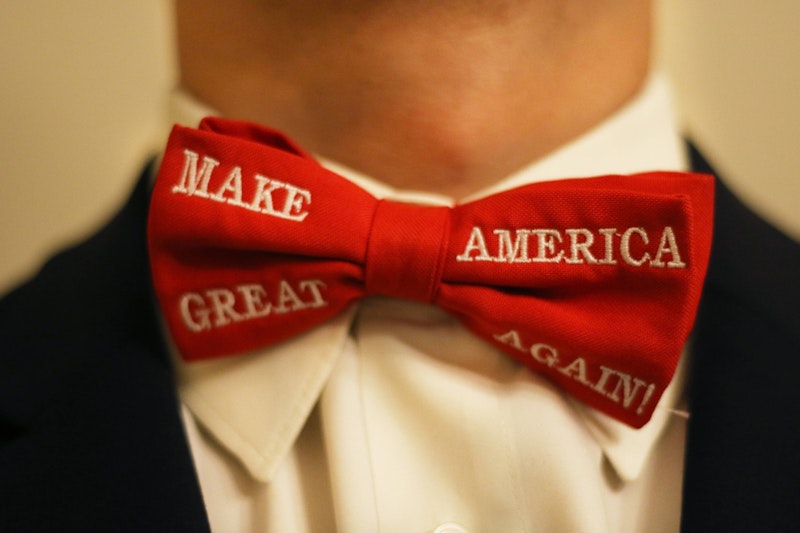 Here’s a new phrase: “aspiring nationalist thinkers.” That phrase is now in The New York Times, thanks to a bold op-ed about Donald Trump and his need to free himself from the elites’ fussing and interference. Yes, the Times has now published a pro-Trump opinion piece. This is a departure, for the Times and civilization. The catastrophe of November 2016 caused the paper to welcome voices from outside the liberal bubble; those voices, however, were from inside an even smaller bubble, that of anti-Trump wingerdom. Vox said as much last week and waxed dubious about the chances of finding anything pro-Trump and publishable. Well, take a look, Vox. The Times found “Trump Was Elected to Govern Without These People” by Daniel McCarthy.

It’s a dud. “Democratic government is healthiest when the people understand that a leader they chose is of one mind with the colleagues that he chooses in turn,” McCarthy tells us. You can see the problem. The people didn’t choose Donald Trump. Some people chose Trump, and this group was second in size to the group that chose his opponent, the fearsome Hillary Clinton. McCarthy meets this challenge by writing around it or writing through it. Either he ignores the fact and blusters, as above, or… Well, take a look: “majorities of voters in a majority of states chose to put Donald Trump in the White House not despite but largely because,” etc. Very careful there, McCarthy!

That phrase, “majorities of voters in a majority of states,” sounds like it was drafted in the author’s mental legal department before being kicked down the hall to p.r. Both areas did fine. The mounting repetition and the shift from one category to another (“of voters… of states…”) together create that odd thing, a stateliness that tickles. But here’s a phrase McCarthy can’t use: “a majority of voters,” period. Nor can he say “plurality.” He can’t say “first place.” By rights he should then be careful of using “democratic government,” but note what I said about bluster.

This bluster is the grave sort. McCarthy has the bowtie knack of frowning past our immediate petty concerns and keeping his eye on the verities. Mouth thin, the author reminds us “how easily a dislike of Mr. Trump can lead to a dangerously distorted view of government.” He means the misgivings many feel at the sight of Trump demeaning or suddenly firing various people the big guy put in government. The flipside of these qualms is the recurrent hope that Trump will listen to advisers who know more than he does. McCarthy doesn’t explain what’s dangerous about these hopes and fears. He goes in for explaining how they’re distorted, pointing out that, after all, the President’s in charge and his advisers aren’t. But people have been looking to the czar’s advisers for as long as there have been czars or Caesars or village chieftains. If the habit departs from form (the czar’s in charge), it adheres to lived experience (advisers make a difference, at times).

McCarthy plunges ahead. “Cabinet members and executive-branch officials are not supposed to be a check on the president,” he says. “They serve at his pleasure, after all… oars all pulling… speak their minds… resign if they feel they must.” The kicker: “But their place is not to second-guess the president or the outcome of the last election.” McCarthy stops and shakes his head. “Those who think that it is should stop to consider the implications,” he says. “If President Trump is meant to be checked and controlled by staff, what other presidents might be?” Here’s my question: is there something unconservative about the phrase “it depends”?

The piece’s wind-up, on Trump: “His great virtue is that he cannot be molded by his advisers; he resists all tutelage. He was elected because the people who do the molding in our politics have for too long led our country down a path of destruction, under Republicans and Democrats alike.” Show that the Obama administration or the Pelosi Congress had something to do with “a path of destruction.” In fact, show that “the people who do the molding in our politics” had much to do with the Iraq War. “There are many people who believe George W. Bush was managed straight into the Iraq War against his better instincts (and certainly against his father’s),” McCarthy says in passing. George H.W. Bush is as establishment and policy elite as anyone, and the same for James Baker and Brent Scowcroft. But George W. had other advisers and we got the Iraq calamity.

Somebody who shouldn’t have been president listened to the wrong people and created a disaster by throwing his weight around. McCarthy brings this up to argue that we should get off Trump’s back. I’ll note that W, like Trump, came in second, and that bowties never change.