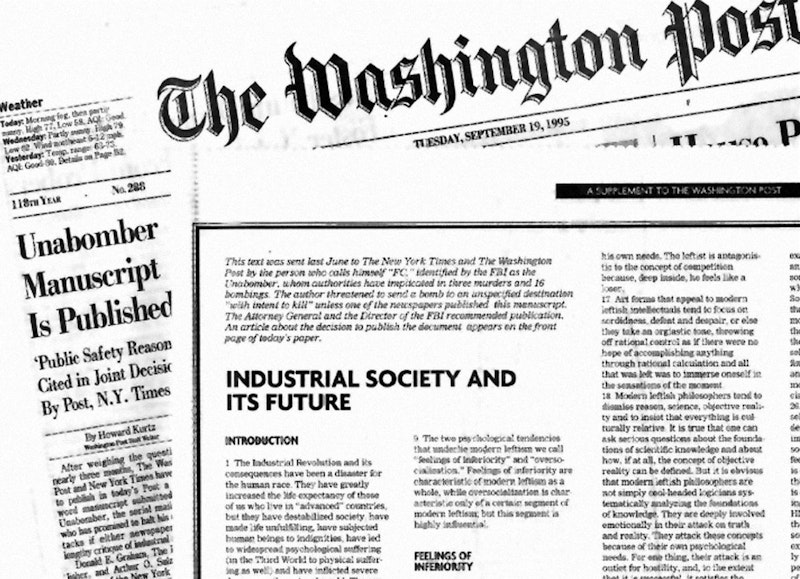 Manifesto Flashback: The serial bomber in Austin, Texas was such a scary story, and a perverse throwback to when people like the UNABOMBER, Son of Sam, the Zodiac Killer, John Wayne Gacy, Ted Bundy, and Jeffrey Dahmer terrorized communities and the country for weeks, months, even years at a time. Serial killers are a rare phenomenon in America now, and I’m not sure why: maybe it’s the ubiquity of cellphones and tracking devices and the disappearance of hitchhiking that limits a psycho’s ability to pounce and prey undetected for a long stretch of time.

Like the UNABOMBER, this Austin terrorist had a clear motive and an ideology we can guess: he targeted prominent black families and planted bombs in residential neighborhoods. The Austin PD’s plea to the attacker “get in contact” with them was another reminder of bygone days—images flash upon decoding cut-up ransom letters and vague threats, police putting pictures up on cork board and connecting everything with yarn. But he's dead now, so sleep tight? Not so easy...

Super Suicide: Spree shootings, mass shootings—most of these people don’t have an agenda. For every white supremacist who shoots up a church or a school and doesn’t deign to kill themselves, there’re dozens more where it’s just a new form of suicide, with guarantees that at least your name and face will be plastered over newspapers and TV for days, maybe weeks after your day is done. The tide seems to have turned after the Parkland shooting though: I get periodic updates from the Associated Press on that killer’s sentencing, but his name isn’t blanketing screens and airwaves like spree killers of years past. That’s thanks entirely to the kids that stood up and marched and told Marco Rubio off on live TV, so thank you Generation Z for actually moving an issue that seemed intractable in a positive direction.

Love, Simon: But I’d like to stay positive. Sticking to high schools, I saw Love, Simon with my family over the weekend and liked it a lot. As far as I know it’s the first of its kind: a mainstream rom-com about an affluent, well-adjusted, and attractive high school kid who’s gay and hasn’t told anyone yet. An anonymous message from another closeted kid at school spreads over social media, and Simon (Nick Robinson) contacts the kid anonymously and they commiserate about not being out and how difficult it is even in an environment that’s by all accounts progressive, accepting, diverse, and kind.

Simon has intelligent, loving parents, a supportive younger sister, great friends, and everything going for him, but coming out remains a horrifying thought. I think the best sequence in the film is when Simon laments how unfair it is that heterosexual teenagers don’t have to come out as straight, followed by a montage of his friends tearfully confronting their parents and doing exactly that: “Mom, Dad… I’m straight.” In this fantasy sequence, it’s played for laughs, all the parents disappointed and some disgusted: “I feel like I’ve been raising a stranger.”

LGBT stories have been relegated to the art houses and in the past couple of years major awards movies with Moonlight and Call Me By Your Name, but those films didn’t play in the middle of Iowa, or rural Alabama, and if they did, teenagers didn’t have access to them. Love, Simon is for everyone, and yes, the co-opting of queer subculture is an inevitable byproduct of homosexuality being normalized in mainstream America. This movie would’ve been unimaginable 10 years ago—there would’ve been marches, protests, poster burnings. Now it’ll pass in and out of cinemas without controversy, serving an audience that’s thus far been completely ignored and mocked in multiplexes. It’s a beautiful thing.