Conformism and fads are the enemies of Gervais. 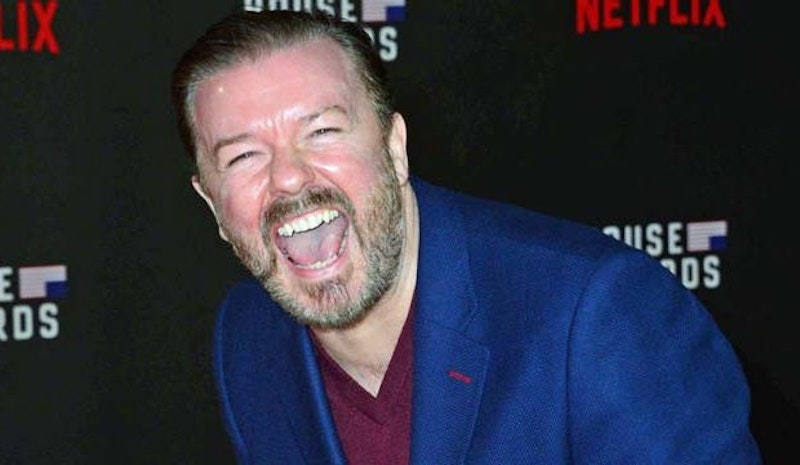 The only famous comic on Netflix who insists on insulting his audience is back, just in time for his time of trial. Ricky Gervais is fearless, so his motto is, like Nixon's: Now, more than ever! Certainly, he’s hated more than ever for his new stand-up show, Humanity. But he’s the hero we need—the only man willing to humiliate self-righteous celebrities and activists. Such are the times, that the most vulgar are the wisest.

Gervais is an atheist liberal celebrity who has nothing but contempt for old-fashioned people and cultural conservatives. But now he hates progressive scolds with a passion they reserve for cultural conservatives and the lower classes. How dare he humiliate celebrities and activists? The beautiful and the morally beautiful. Our superiors. Who does he think he is? He thinks he came to chew bubblegum and kick ass—and he's all out of bubblegum.

Gervais has encountered too many people who think their virtues give them authority to censor language and get rid of nasty comedians. He’s learned they’re really out to make their own flaws impossible to criticize. His most shocking example is the progressive enthusiasm and hysteria over Caitlyn Jenner, whom he calls Bruce half the time. He gleefully points out all the crazy responses he draws that way.

Aside from the pleasure of shocking people, why does he do it? It's because, like all liberals, he thinks the only sins are hypocrisy and inequality, and he can’t stand seeing people get away with murder. So he explains in the most vulgar way that the press and Politically Correct opinion are lavishing praise, media attention, awards, and the name of beautiful hero on someone who killed people in a car accident.

Jenner declared him- or herself female on Diane Sawyer's show, in April 2015. He (as at the time) or she (as progressives insist now) had killed people in a car accident in February 2015. Guess which event has been the news for years since? The pronouns accidentally, but poignantly, reveal the shocking truth that the media and celebrities love their prejudices way more than justice, to say nothing of the victims. It's not that progressives are the only people who use their privileges to excuse murder. But they do it while claiming holiness. And they never tire of humiliating any Catholic (or the Church as such) for doing the same. Apparently, Gervais is the only celebrity who has had enough of this.

Freedom of speech is not just about justice for Gervais. It's crucial to his understanding of humanity, because it allows us to show both the good and bad in ourselves. It allows him to show the worst about himself so that we can recognize the extent to which we are corrupted by a selfish individualism that makes us lonely and terrorized in front of our mortality. He shows our pettiness, which we hide behind the most progressive declarations. Our hysteria and malevolence. His bet is, if we can say we're pretty bad, then we won't have to pretend to be progressive saints. If we can live with our sins, we won't want to destroy others for theirs.

Conformism and fads are the enemy of Gervais, as of any real comedian. Nowadays, comedy is a liberal monopoly, so it's mostly hacks and panderers, but there are rare exceptions—those who, like Gervais, have figured out that that conformism on health and safety is the same thing as conformism on feelings and opinions. He learned the comedic way, by stirring outrage and figuring out what nobody dares say. But he's not just insightful, he’s also trustworthy, because he’s shameless about his own hypocrisies and is willing to look bad. He's the man to shout down the hypocrisies of those who pretend they're perfect for the job of policing our speech and thought.

His most shocking example of how intolerable these scolds are was a Hitler joke. Why are such tasteless jokes necessary? Because our progressive friends can never stop calling people with whom they disagree Hitler. They think it makes them our moral superiors. So he says, to paraphrase: The Holocaust was bad, some would say as bad as food allergies. But if you had to have someone at a dinner party, who would you choose, Hitler or someone who complains about food allergies?

Gervais knows we cannot live as scolds or by giving scolds authority over our lives. They’ll turn into control freaks in the name of eliminating all danger or offense. So we need to expose the moralists' hypocrisies—it's the only way to tolerate our own hypocrisies a little better. We can’t be perfectly moral and shouldn't pretend we're creating heroes when we want the kind of power that rots souls and societies. Gervais knows more than most celebrities and pundits and if you watch his show, you'll learn what else he's figured out.