Boys: We Will Survive

It’s pitiful how we think about “fixing” people. 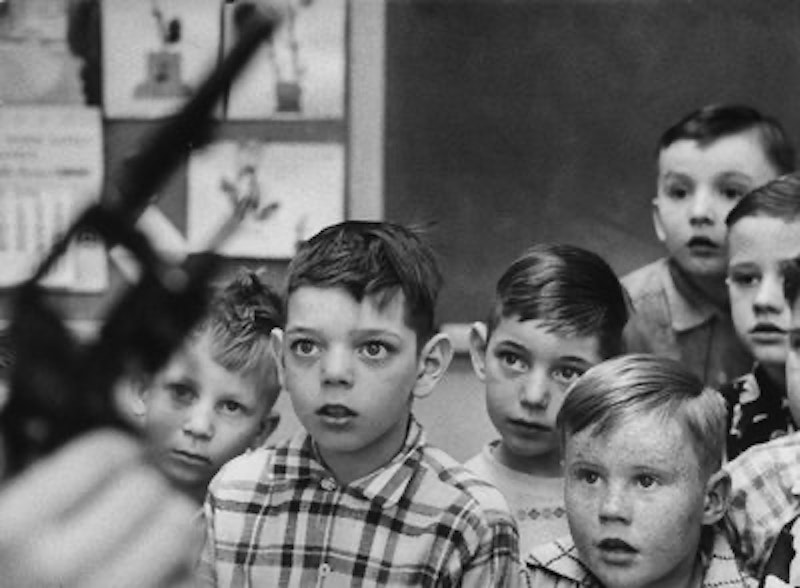 There's been yet another iteration of what is, by now, an ancient strategy for fixing what ails us. "The Boys are Not Alright," said The New York Times, after the latest school shooting. So we ought to be "Building Better Boys," according to The Guardian. I’ve been hearing these notions, in the very same words—presented each time as a discovery—since I was a boy in the 1970s.

I’m going to attack this approach, but not because I'm a gender essentialist, male supremacist or swaggering he-man. Actually, I think gender is pretty socially constructed and liquid. I may be a dude, but I consider myself a feminist. In fact, I'm proving that I'm no Clint Eastwood-as-the-man-with-no-name by making these very disclaimers, which show me to be the "new sensitive male" of 1974.

At any rate, consider this line of reasoning. We have a problem with violent crime. We "notice" that many of the perpetrators share membership in some demographic category—a certain race, for example—though people who behave in this extreme way form a tiny minority of members of that group. We infer that the problem is the demographic category itself, which amounts to a pathology. We offer to cure it, and proceed to various means of coercive correction directed at all members of the group.

This is the structure of bigotry itself. It's the structure that got us to mass incarceration on a racial basis. We need to build better black people. What has gone so wrong with their culture? asked well-meaning people such as Daniel Patrick Moynihan. If we can re-educate them to be more like white people, then we wouldn't have this problem. It's also the structure of anti-Semitism: look at the way those Rothschilds dominate the world economy. The Jews are not alright. But we can fix them.

One problem with this is characterizing the behavior or personality of each member of a very large group (in this case, half the population) by the actions of a few. Yet another is the strength of the explanation itself: was Nikolas Cruz, for example, specifically struggling with "toxic masculinity"? What role did gender issues or identity actually play in the shootings?

Beware of explanations that just sort of wave in the direction of common wisdom without doing anything to connect it to the events supposedly being explained. We do this all the time. What's gone so terribly wrong with politics? "Social media." It doesn't actually explain anything as it sits there, but people have come to buy it as the hyper-generalized account of everything bad.

Really, you’re blaming and devaluing the male gender as a whole. I can understand the impulse, but I don't think it’s likely to end up having the effect you want. This goes with the absolutely relentless self-esteem enhancement aimed at girls for decades now: there is nothing you cannot achieve! You are beautiful, you are strong, you are smart! Just be yourself and change the world! All media and all curricula seem intent on conveying this: it's the only theme of PBS kids shows, for example. Go watch Oprah do it all again in A Wrinkle in Time. Every person who’s accepted any award for the past decade has given a little rap to that effect.

So relentless is this barrage of self-affirmation that I don't regard it as sincere. People are trying to make it true by saying it over and over. If it were true, you wouldn't have to chant it to yourself continuously for years on end. The extreme expressions of self-esteem betray the underlying and overweening insecurity. Indeed, if you really look at it, Oprah has been on a yo-yo diet of overblown self-esteem and collapse into self-loathing for decades.

Well, of course people are saying in the same breath just the opposite to boys: you are ugly! You are evil! You are stupid! It's just the obvious other side of the gendered conceptual scheme. We've been attacking and devaluing boys for all that time, pretending not to notice that we were doing so. We've been defining their gender identity as a problem or pathology and trying to fix it.

And what pathetic, childish, coercive means we're using to do the fixing. Jaclyn Friedman, in the Guardian, describes her four-hour middle-school cure for boyhood:

The course begins with the “gender box” exercise that’s a hallmark of all MBTM [Maine Boys to Men] programs. The idea is simple: the group leader draws a big box on the chalkboard, and the boys brainstorm stereotypes of masculinity. All of those go inside the box. Then they discuss what happens if a guy tries to behave in a way that’s not described in the box. Those punishments and threats hover around the outside of the box. The completed visual serves as a jumping off point to discuss how confining traditional masculinity can be and how harmful to both boys and girls, both men and women.

Then I suppose these boys will be led by the nose to "think outside the box." Of course, if they already identify as masculine, they’re receiving training in self-loathing equivalent to their female classmates' training in self-esteem. I’d expect any boy worth his salt either to check out or behave disruptively. One clever or malicious child can make your four hours accomplish the opposite of what you intend.

One way to destroy a category of people is by "assimilation," either straightforwardly coerced or strongly encouraged with incentives. This is the basic idea of gender retraining programs, which are like Christian schools for Native American children: expressions of our generosity toward your savage, violent people. We’re here to help you improve, that is, to be more like us, for we are egalitarians.

What's really pitiful is how we think about fixing people. Four hours of propaganda in middle school might do it, or a barrage of television programming. We fantasize that human beings are so malleable that a few tweaks to the symbol system can change their inmost identities. That's ridiculous, and it's also evil, because it lets people think that that it's their job to re-engineer the human species. You'd think they'd have learned differently by now, but teachers of this sort are unteachable.

I think gender is changing, and relatively quickly, but it's not because of middle school curricula or because Meryl Streep lectured to that effect at the Golden Globes. It's an incredibly complex matter, and genders shift in complement: changes in each come from and affect the other, or all the others. The shifting identities drive the shifting symbol systems as much as the other way round.

But it’s no one's job in particular to tell us all how to live our own gendered embodiment, much less to try to re-engineer us in accord with some sort of plan. These plans to fix whole bad populations—fix races under the auspices of a stereotype, fix poor people to be more like middle-class people, fix men to be more like women—are ridiculous expressions of arrogance. They can’t have the effects that people fantasize about; they invariably deploy the unconscious prejudices of the engineers.

And the idea that these procedures are going to stop school shootings, for example, relies on a line of reasoning and prescriptions for action that are, at each step, unbelievably flimsy. In a way, all the thrashing around is relatively harmless, I suppose, unless you happen to be stuck in a gender re-education camp for deviant youth, i.e. boys. If you are, figure out your mode of resistance, for resistance is manly.

And before Jaclyn Friedman and co. cure or kill masculinity, I'd like to ask them a question: are you sure you won't miss it when it's gone?