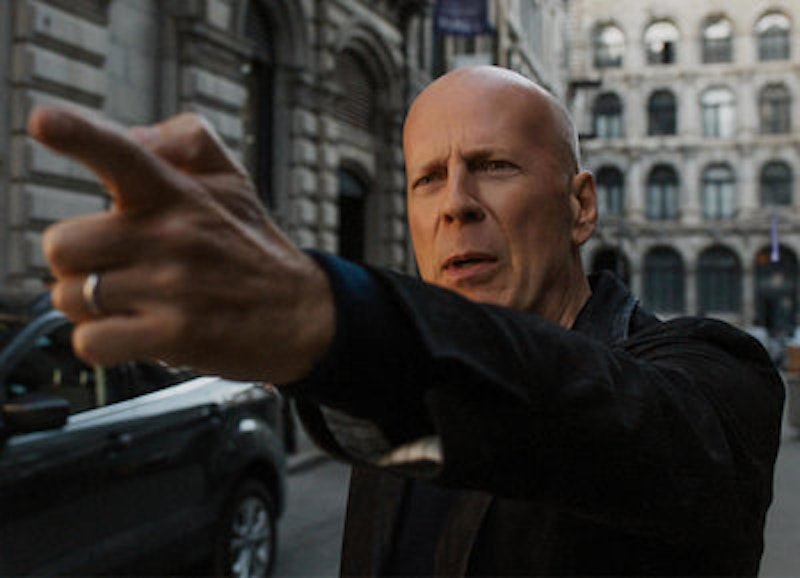 You can applaud the death-dealing vigilante played by Bruce Willis in Eli Roth’s recent Death Wish remake and at the same time fear psychopath-in-chief Trump’s proposal to execute drug dealers. The story of my life, ideologically, is getting people to make that crucial distinction between engaging in self-defense vs. attacking people who (at least in principle) are merely engaged in commerce.

Be firm with people like the gang who invade Willis’ house in Death Wish but civil toward people whose choice of recreational chemicals you dislike. No need to turn into either a pacifist or Duterte, the bloodthirsty anti-drug-trade president of the Philippines, whose resemblance to Trump shouldn’t please us. The goal should be a world in which no one—whether burglar or anti-drug cop—uses another’s body or property without permission.

Nuance doesn’t come easily to most minds, though, so we end up either with people who hate all guns, and thus hate vigilantes like the one Willis plays, or who love anything done by autocratic rulers no matter how brutal or by cops no matter how corrupt—such as Baltimore cops carrying toy guns to plant on suspects they shoot in case they need to make it appear the suspects looked like threats. (Got you good, you stupid innocent dead person!)

If you dislike violent criminals and distrust the government, you have to love vigilantes (so long as they too abide by the rule of using violence only to retaliate as needed against aggressors), just as you have to love the idea of private gun ownership more than gun control laws that leave guns in the hands only of cops and criminals. Conservatives should be going to Death Wish in droves right now if they want to see a movie that climaxes with a homeowner hero purchasing an AR-15, a bit of contrarianism we could use right now. (The gun-toting hot-chick scientists of Annihilation deserved far better box office, too, though that film broaches very different philosophical issues.)

I must suspect that director Roth is turning into a more conscious, across-the-board conservative, too, since the film contains fleeting, offhand references to only two authors and they are free-market economist Milton Friedman and Christian fantasy writer C.S. Lewis, about as close to a two-book canon of 20th-century-style conservatism as it gets. Those were the days.

Now, you’re more likely to hear about that Florida school shooting survivor, David Hogg, than free markets or the timeless basis of morality, though (not that I’m suggesting there’s a God; you’re really going to have to take responsibility for yourself). And you’ll somehow go hours and hours lately hearing about the Hogg lad’s hatred of guns—and the rather fascist-looking anti-gun armbands he and his sister now sport—without hearing much about the calculating Democrat public relations machine that leapt into action around him while the bodies in Florida were still cooling, or about the kid being the son of a well-connected FBI agent who no doubt thinks some government-approved people like himself are well-suited to have guns, even though the government was of little use during the Florida shooting.

If Death Wish hasn’t spurred quite as much public reaction as one might’ve hoped, though, we have another couple of cinematic chances coming up next month to open our eyes to the criminal ugliness of reality: You Were Never Really Here and Chappaquiddick should be reminders, respectively, that there are criminal networks too stealthy, well-connected, or elusive to be on the police’s radar and that elite political families tend to get people killed, though admittedly not always by drowning. (It looks as though the child-trafficking network in You Were Never Really Here may bear some resemblance to the network of psychos in an Eli Roth project, coincidentally: namely, the child-torturers in his Hostel movies a decade ago.)

Back in the real world, Democrats are now seeking an FBI budget boost, likely just as a kneejerk reaction to Trump being at odds with the Bureau lately. As usual, conservatives in Congress will fail to mount a coherent counterargument, since conservatives turn into socialists and lovers of government spending as soon as a badge is flashed or a bomb dropped. If conservatives were consistent, they’d call for the immediate abolition of any arm of government, whether welfare-providing or gun-toting, that made the mistake of getting mentioned in the press. End it all and let the vigilantes pick up the slack if you really want efficiency.

There’s no right more basic than self-defense. It’s even more fundamental than the property ground rules of a free-market economy, though these things are in no way at odds. In fact, the sound basis of my own morals, back in childhood, was probably the simple recognition that I wouldn’t want my family to sit around helplessly waiting if faced with the horror of home invasion. Anyone who wants potential victims disarmed and at the mercy of slow-moving government assistance is a cold-blooded ghoul.

It’s interesting, too, how stark a rural/urban divide this issue becomes—more so than almost any other rural/urban disagreement on econ or mores. That’s no surprise to any sane person who’s lived in both the woods and the big city, as I have, though. You know how long you’re going to have to wait for a response to wend its way through rural back roads if you can’t fend for yourself. The city is more prone to the illusion that everything is under control, on the grid both literally and figuratively. You’re taking a risk trusting in the mercy of criminals or the wisdom of authorities in either environment, though.

Your right to defend yourself shouldn’t be at the mercy of stats about other people and other nations, either, but big, broad stats are probably more telling than the little details, and among the big stats is the fact that gun ownership has doubled over the past two decades in the U.S. even as violent crime has been cut in half. That’s not supposed to happen if you believe the anti-gun crowd’s simple interpretation of international stats.

If the anti-gunners really cared about facts, though, they’d admit that inter-state comparisons within the U.S. might be more telling than international comparisons. And the deadliest state in America isn’t technically a state—it’s the District of Columbia, where those controlling-and-regulating Washington geniuses have created 20 times the gun murder rate of the safest state in America, New Hampshire, which loves guns and has virtually no regulation of them or of anything else, not to mention low taxes and a big libertarian community.

The most unreasonable thing about anti-gun people, though, is the way they whip themselves into a frenzy each time there’s a (very, very rare) mass shooting, asking us all “How many more will it take before congressional action?”—despite their ideological opponents’ analysis of such incidents, right or wrong, obviously being the opposite of their own. Getting more hysterical and frustrated with each new incident offered as data, without ever coping with the arguments of your opponents, is as absurd as a religious fundamentalist asking with mounting anger each day, “How many more times do these science people have to see the sun rise before admitting there’s a God?” Infinite iterations, however horrific, aren’t going to make a difference unless you demonstrate your analysis of them works.

But ultimately: if you take away people’s right to defend themselves, you mainly aid and abet the criminals and are thus in no position to claim the moral high ground. Expect those who disagree with you to stick to their favorite three-word argument: Cold. Dead. Hands.