The “Mafia” Style in American Politics

Trump and his sidekicks owe their style more to the fictitious mob. 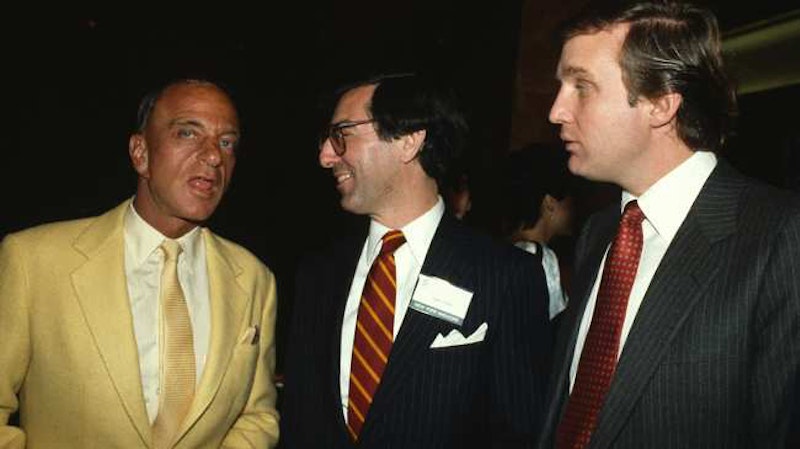 Comparing President Donald Trump, and members of his entourage, to the Mafia isn’t a new notion. The news is filled with speculation that Paul Manafort, Michael Cohen, and other associates may “flip” on Trump, which certainly isn’t a formulation that’s typically part of the vocabulary when it comes to presidents.

But that’s far from the only context in which the Mafia has come in relation to the President. A source close to Trump once referred to Robert Mueller’s investigation, in The Washington Post, as a “classic Gambino-style roll-up.”  There have long been rumors putting Trump himself in various degrees of contact with wise guys, especially during his New York real estate and construction heyday. Michael Cohen has spent much of his career even closer to the actual mob—albeit the Russian one—and is fond of two things frequently associated with the Mafia, threatening people, and loud suits.

But even if Trump and those around him have committed rampant wrongdoing, including Mafia-type crimes like money-laundering or even RICO infractions, they’re not actually mobsters. In fact, in their style and behavior, they have a lot less in common with the actual mob than with various fictional representations of the mob.

Trump and his crew, unless you’re counting drone strikes, don’t actually murder people. The dichotomy recalls the publication of a business advice book in 2004 called Tony Soprano on Management: Leadership Lessons Inspired By America's Favorite Mobster, a thesis that’s undermined because Tony Soprano, in his profession, gets to kill people, while in your profession, you probably don’t.

Trump represents a very specific type of pretend New York tough guy, who subscribes to a very specific value system—the values of being a “stand up guy” and “just breaking balls”—one that goes beyond any particular ethnicity or subculture. It may have certain things in common with the Mafia, but it’s a distinct style that’s familiar to anyone who’s spent any length of time in and around New York City.

The Trump circle are the type of people who watched The Sopranos, thought Tony Soprano was the unambiguous hero, and spent every episode rooting for him to whack people. Trump even says “there was no collusion” exactly the same way Tony Soprano says “there is no Mafia.”

Trump is surrounded by slicked-back, overly deferential sycophants. They’re the sort of guys who are huge fans of The Sopranos or The Godfather films, have spent their lives closely followed the New York tabloids’ version of the mob, and have emulated that style. Consider the brief White House tenure of Anthony Scaramucci. “The Mooch” has never been reputed to have any mob associations, but were he a fictional character on a TV show and not a real person, the writer of that show would likely be raked over the coals for writing such a crude, over-the-top Italian-American stereotype.

It doesn’t help that Trump-adjacent stories keep happening that are straight out of Sopranos episodes. Michael Flynn was rumored to have agreed to cooperate with the feds in order to spare his ne’er-do-well son from prosecution—which is exactly what mobster Carlo did on the show’s final season. There was the headline last month that indicted former campaign manager Paul Manafort was granted dispensation from his house arrest to attend a grandchild’s baptism—much like Johnny Sack and his daughter’s wedding. And Trump media backer Sean Hannity, much like Tony and his crew in the later seasons, carried out a real estate investment scheme that involved HUD. There’s even an episode of the show in which A.J. Soprano expresses a desire to “go to work for Trump or somebody.”

The Trump style is also informed by the New York tabloids, which Trump used to plant stories while using an assumed name. It’s worth noting how those tabloids, and especially the New York Post, covers organized crime.

To the Post, criminals are “scum,” “vermin,” and “animals” who deserve all the scorn and jail time in the world. Except for the Mafia, which is treated with both rapt attention and uncommon reverence. The columnist Steve Dunleavy, who during his career cheered the NYPD and cursed criminals 95 percent of the time, covered mob trials and treat the accused like wronged heroes. The same Steve Dunleavy who, now retired, surfaced in the news earlier this spring as a Trump confidant who told the future president in 2013 about the Eric Schneiderman abuse allegations.

We also see this with the recent advertising campaign on behalf of Gotti, John Travolta’s catastrophically reviewed biopic of the late mobster, which framed the film as a culture war grievance that might as well have been a Trump tweet—“Audiences loved Gotti but critics don’t want you to see it…The question is why???”

It’s tempting to compare Trump and his associates with the mob; but the comparison is ultimately imperfect. And it’s also somewhat unfair—to the mob.