Have we met, America? 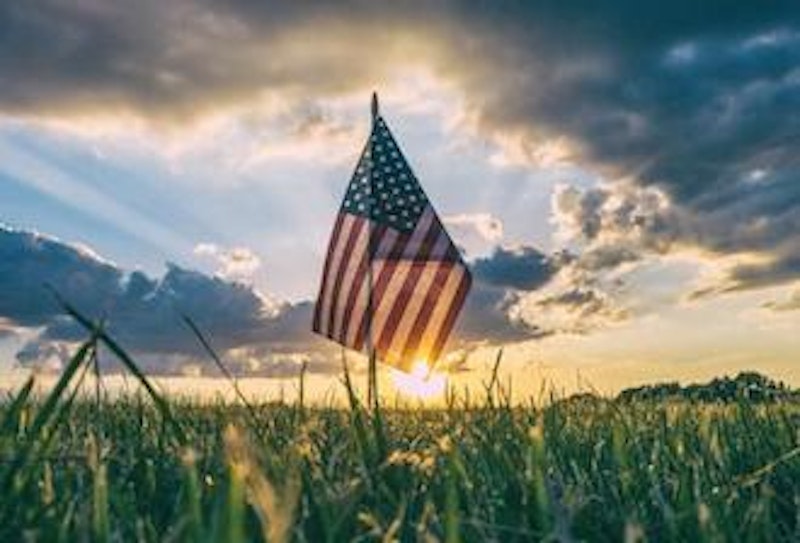 To know just how proud or ashamed of the country to feel tomorrow, it would help to know what the Hell is going on in it. Like many, I feel more confused, and thus more agnostic you might say, the bigger the info-torrent becomes. The real world, like Westworld, sometimes seems rich with dramatic possibilities and at other times just non-linear and pointlessly confusing.

Yesterday was World UFO Day, for instance. You might be tempted to dismiss the idea that the government has spent untold millions investigating that topic and lying about it, but then, how many people would have believed back in the 1940s that the U.S. government was eagerly absorbing Nazis into prominent intelligence and science positions in Operation Paperclip to aid in the dawning struggle against the Soviet Union? That happened. What else doesn’t make our usual glib checklist of national attributes but should? Who knows what else goes on in these parts?

Surely, at this point no one would be surprised to find out weird things go on out in the deserts of the Southwest, at the fringes of the national grid. If they’ll put kids in detention centers, I can’t imagine they’d balk at hiding extraterrestrials out there if they had any.

In a timely reminder we’re a divided nation, a bigger bunch of Americans than expected watched the new movie Sicario: Day of the Soldado this weekend, with Josh Brolin and Benicio del Toro as ruthless government agents policing either side of the border, but I’ll bet there were some in the audience thinking, “These two monsters are probably just like the men who left my cousin Ramon dead in the sand in Arizona,” while others were thinking, “Hey, it’s the guys who play the aliens Thanos and the Collector in the Avengers movies!”

All part of the bafflingly multifaceted bigger picture.

Do we have a president who just made surprising diplomatic gains in dealing with North Korea? Or is their apparent continued nuclear-facility upgrading over there a sign that was all meaningless?

On a more homegrown socialist front, should I be pleased a young Hispanic female leftist displaced a prominent congressional Democrat in their primary in New York, since the Democrats are calcified and deserve to see voters #WalkAway from their old guard? Or is this just another sign we’re going to end up torn between Weimar-like political extremes for the foreseeable future? Note that I’m not terribly worried that it’s a sign we’ll end up with actual, full-fledged socialism, since socialism is a political philosophy, and nothing resembling philosophy seems to happen in real-world politics anymore.

Should I be eager for Trump to make another somewhat-libertarian appointment to the Supreme Court, though, or view it as just desserts if the Democrats footdrag about approving any appointments the way the Republicans so brazenly did before this? Clearly, the liberal establishment thinks a Supreme Court appointment is a time to fight. ABC News, sounding desperate, has already run a piece implying circuit judge and potential nominee Don Willett is intellectually suspect merely for tweeting about Eminem, cornbread, puppies, and Rick Astley.

Whether the left’s objections are sound or stupid, the thought of a perpetually-deadlocked 4-4 Court frankly doesn’t bother me all that much. It seems of a piece with the gridlock that’s the best thing about the rest of the government, including the one-man gridlock produced by Trump’s endless self-contradictions. Better this than “decisive action,” given how awful government action usually is.

Then again, is the nation now so bitterly politically divided that half the population would happily kill the other half so long as it brought their own side political victory—or even just brought the other side extra pain? You have to wonder lately where it all ends. Does Twitter eventually reach such a deafening volume that ritual bloodletting becomes the inevitable next step? What if the first Purge cannot be safely confined to Staten Island?

Trump’s fondness for tariffs is unequivocally bad, the sort of thinking that contributed to the Great Depression happening eight decades ago, but I’m not confident the establishment is any brighter on the topic. Do you realize how many countries we have sanctions against for one reason or another in this world, largely thanks to the respectable/liberal establishment, hobbling the commerce that would tend to make nations loosen up and become more free-thinking? The U.S. is one of the most trade-squelching forces on Earth even when it doesn’t have a populist in the Oval Office.

I don’t think we can even say with confidence it’d be so awful if Trump were a full-blown dupe of Russia, if it makes him more likely to urge Russia’s inclusion in G7 meetings and that in turn leads to Russia thinking more like a trading partner and less like a military sparring partner. Trump sucking up to Russia could save humanity from nuclear war, for all the belligerent blowhards in the foreign policy establishment know, even if the most far-reaching thought going through his mind about Russia is just “Bribes and hotel contracts, yes!”

And needless to say, if the Obama crowd and Clintonites were so terrified of Russia, they might’ve done something about that country’s feeble election “hacking” attempts back in 2016—except they obviously thought Clinton was a shoo-in and thus did nothing, only retroactively freaking out and claiming Trump stole the election (an embarrassing turnaround after making a big show of “worrying” Trump wouldn’t respect the legitimacy of Clinton’s eventual election). Meanwhile, their own sordid dealings with the Saudis, Weiners, and occasionally Allison Macks of the world is treated as politics-as-usual. I wonder which faction has actually been responsible for more displaced children, now that I think about it?

But I shouldn’t engage in conspiracy theorizing. Once you start down that road, you’re tempted to see a hidden hand in every great national tragedy, such as the collapse of a Kentucky distillery last month that destroyed 9000 barrels of bourbon. We really could have used that bourbon these days—and come to think of it, the Saudis are anti-alcohol. And now some people may turn to Russian vodka instead of bourbon. There are suspects everywhere after a disaster like this, in short.

Drink up on the Fourth and theorize out loud about what all the usual suspects are really up to, for me. Mounting paranoia is the best way to be sure you aren’t celebrating excessively on this patriotic occasion.