Empires ended this way, sort of. 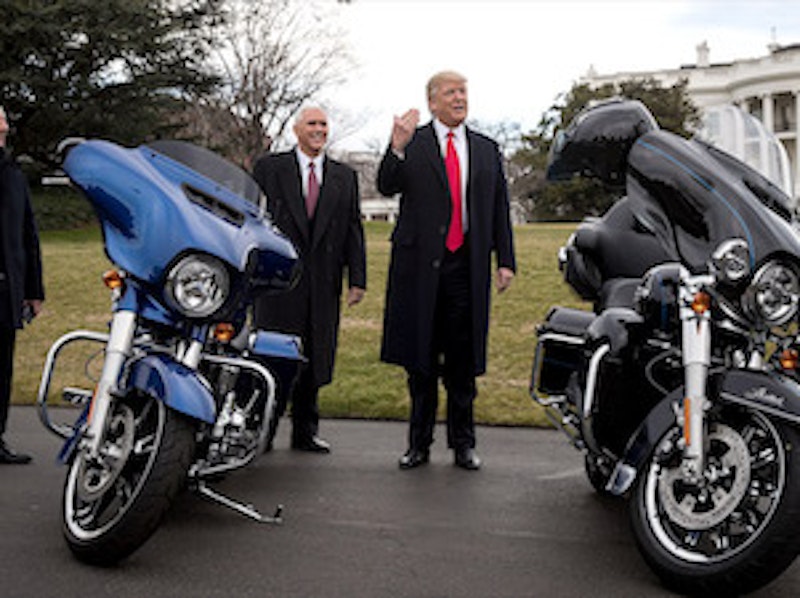 Trump supporters have a real knack for moving the goal posts so they can claim their man is “winning” no matter what he does. It’s embarrassing. Among other things, Trump has, according to one survey, pushed the American public’s support for tariffs (which are always a trade-hampering, poverty-producing, price-raising bad idea) from a mere 29 percent up to 45 percent. “Winning!” But again: bad.

Amy Chua, back before she was known for being a “Tiger Mom,” wrote a more important book, Day of Empire, about how and why the major empires of history have risen, peaked, and collapsed. I’d say Trump, or more precisely the U.S. government while Trump is nominally its head, is doing about four out of five things that empires in Chua’s book tend to do wrong in their final days.

In their heyday, healthy empires have tended to be pro-trade and open to people and ideas from outside (while still being proud of their own uniqueness) and to keep public works and military expenditures within sustainable limits. By the end, the societies have (1) numerous, unsustainable military commitments, (2) vast and inefficient public works, and (3) a sudden cutting off of outside and immigrant influences, including (4) trade, often accompanied by (5) a far narrower and more bigoted notion of who counts as a member of that society, intended to foster tighter unity but ultimately undermining social glue (which requires some flexibility and diversity).

Not that the Romans or Phoenicians were modern libertarians or classical liberals, obviously, but this is a very rough description of the purported recurring pattern. With his autocratic tendencies, nativism, trade barriers, and doubling of the deficit, as noted above, I’d say Trump’s doing about four of those things Chua warns about. (And neither party’s contingent in Congress is clearly superior to him, I must hasten to add. The Senate has fought his proposed half-percent budget cut, for one thing, even as we remain $20 trillion in debt. Never let the establishment convince you they’re “serious,” no matter how great the contrast with Trump’s buffoonery.)

Laying the groundwork for decreased overseas military commitments—with his skepticism about NATO, Russia confrontations, and troops in South Korea—could be the one oddball deviation from the Chua doom-pattern by which Trump saves us all, or at least allows the can to be kicked a little farther down the road, and productivity may boom under decreased regulatory pressure, but I can’t summon the confidence or outright enthusiasm his supporters reliably do.

Contrary to what Trump claims—and what so-called conservatives suddenly appear to believe as they transmute from free-marketeers into populists—trade wars are bad and no one wins. Harley-Davidson claims it’s shifting some manufacturing overseas to avoid dealing with the tariffs caused by Trump’s trade war. Perhaps, as Trump suggests, they exaggerate the influence of the tariffs on their decision, but if the tariffs had even a small impact (by raising their anticipated production costs), is that an America-first outcome, populists? And is it a surprise?

“Be patient” tweets Trump at those no-good quitters at Harley, warning they’ll face even higher taxes overseas, as if that vindicates the ones he imposes here. (Tariffs are like beating random members of your own population and saying, “We have to do this—China is way ahead of us in the number of beatings! China!”) Some Trump defenders will claim, in defiance of all historical evidence, that he’ll only deploy tariffs for brief, strategically-decisive periods to open up greater, tariff-less trade in the long run, though Trump has shown not a glimmer of awareness of the way companies, once protected from overseas competition, get lazy, raise prices, and lobby for the perpetual maintenance of the tariffs.

You don’t pay naturally occurring (that is to say, low and competitive) prices for things like steel and sugar and perhaps never will. Protected industries will never say, “I think we’ve hurt consumers enough now, so let’s trade freely.” They’ll always want barriers to keep their competitors’ products away. In the “rational” 18th century, for protectionist reasons, there was even a complete ban on calico cloth in France, as Virginia Postrel has recently written.

It’s bad enough when the protectionists make whining, irrational, but at least still econ-based pleas, along the lines of: “We must help out our beloved [whatever] industry, and so impose a temporary [ha!] tariff of [arbitrary number] percent on [thing you wanted to be able to buy more cheaply].” But things get even uglier once conservatives, morphing from market-advocates to protectionists, start losing any real interest in econ and just decide that keeping out competing foreigners (including illegals) and their products is more important than mere capitalism, prices be damned.

Soon enough, they’re condemning farmers as weaklings if the farmers complain about not having immigrant laborers anymore and aren’t willing to just suck it up and pay more for red-blooded U.S. citizens. So in the Trump era, patriotism suddenly means loving government-imposed inefficiencies that hobble businesses?

I’m also learning how many people adhere, on tariffs as on countless other regulations, to the dumb view that “If we haven't completely destroyed [an industry, a criminal suspect, a cultural institution, etc.] we must not be doing any serious harm at all.” The U.S. still does billions in trade? Well, then, tariffs have magically become harmless! (Tell that to the devastated nail-making industry.) Just wait until that attitude gets applied to every other regulation. What, you don’t like filing all those EPA reports? But your industry hasn’t been completely decimated yet, so… This way lies merciless enforcement without regard to costs and benefits. What’s the point of having ostensibly business-minded Republicans if they so easily lose sight of tradeoffs?

But regardless, trade means billions of individual people making the individual exchanges they want to make. Nations do not trade. Your town does not trade. You do. And if any government, domestic or foreign, Republican or Democrat, tries to stop you from doing so, it’s your enemy. Trump being in office instead of, say, Bernie Sanders does not change that.