The Lesser Evil and the Art of Verbal Expression

Biden had the weaker performance last night, and won anyway. 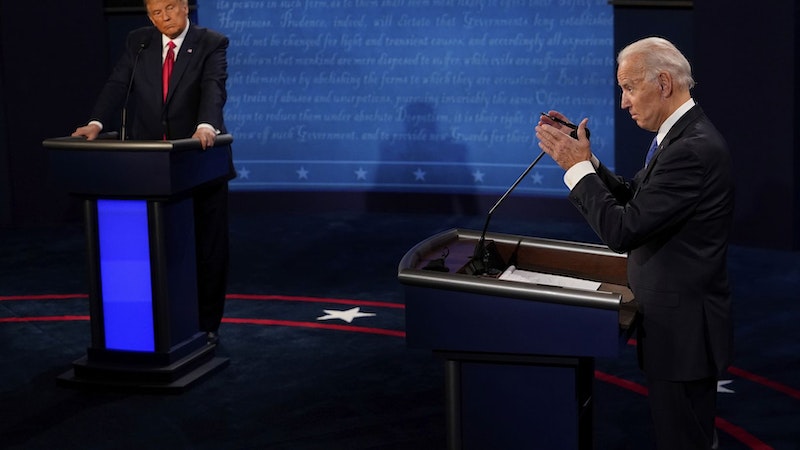 Cornered into the lesser of two evils, I’ve early-voted for Joe Biden (in 2016 I wrote in Maya Lin). Even I was relieved that Biden did okay in last night's debate, which should be taken to mean that—though sentence by sentence he struggled as always to make sense—he didn't appear to run off the rails into sheer gobbledygook or get statistics wrong by a power of 10 or accidentally go racist or sexist, as he often or even characteristically did in the debates against his opponents for the Democratic nomination.

Ignoring the fact-checking for a second, I think Trump won last night by quasi-objective measures. He did much better than in the first debate. He seemed pretty calm and reasonably happy, even as CNN has been speculating for weeks now that he's growing more erratic or that his personality is disintegrating. Last night, he was aggressive enough not to be understood as repudiating his own performance in the first debate, but he was not jumping out of his skin trying to attack. His lines were sharper than Biden's ("success will bring us together," for example), which is not saying very much. Despite what Dem pundits would like to believe, he mints perfectly coherent sentences all the time and is able to improvise verbally (though his talk is full of tics, such as "I will tell you").

It still irks me that Biden inserts "in fact" randomly between any two words. But he managed to get that "number one, number two" thing down to reasonable level, which reduced the parodic and parrotic quality of his verbalization. "My response is, people deserve to have affordable healthcare, period. Period, period, period," said Biden, making his terminal punctuation an ellipsis. But Biden got in some good lines, which always come as a surprise. When Trump tried to tar Biden with Sanders-style socialized medicine, Biden cracked back with "He’s a very confused guy. He thinks he’s running against somebody else. He’s running against Joe Biden. I beat all those other people because I disagreed with them."

The Trump administration's response to COVID has been a disaster; it's indefensible; it will lose Trump this election. But his performance in this debate was solid, even if the claims were flimsy. It was a bit reassuring because in that first debate, he appeared to be dissolving into a puddle of rage. Still he lost, partly because the expectations on Biden in improvisational contexts are always low. My left-leaning friends and Twitter were just praying that he got through without, say, advising black parents to turn on the record player so that their children can hear language. Biden survived, and with a solid lead in the polls that's probably enough.

I'm not sure, in retrospect, why I ragged Biden so hard for the verbal incompetence during the nomination process. I said "If Joe Biden wins the nomination, Trump will wipe the floor with him." Linguistic deficiencies aren’t what you'd build in if you were designing an ideal political leader. But one thing that should’ve been more obvious to me than it was: being able to speak smoothly or to come up with a sharp formulation on the fly is, first, not a moral quality; compared to, say, a Muslim ban, or hinting that you won't leave office if you lose, it's trivial. I probably care too much about how people talk.

Also, Biden has gotten better, which even Trump has noted, suggesting that we might be able to figure out why, if the candidates were drug-tested. Biden got a shitload of prep time in the isolation period. And then I think that, when he was trying to beat Elizabeth Warren and Pete Buttigieg, he had trouble getting any focus or passion going, was more concerned with placating and agreeing with his opponents and almost apologizing to them for some of his former positions than directly trying to take them out. He didn't, as a matter of fact, beat them by disagreeing with them but by seeming to co-opt their positions and rhetoric. But squaring off one-on-one against Trump, he has gained a sense of mission and focus, and even Warren and Buttigieg fans now have to treat him as their savior by default.

It turns out that the linguistic struggles have a sort of charm. The flow of ridicule in my head has slowed a bit, whether I think of young-Biden-the-stutterer or not. Barack Obama, for example, even in an interview, rolls out complete sentences featuring subject/verb agreement, and whole paragraphs developing a single idea coherently, or at least sort of prettily. He sounds like a professor, though I'm still holding him responsible for the viral growth of "the reality of it is, is that." Biden does talk more like most people talk than that, though he's worse than average in a number of respects. But people, including me at this point, have come to find his stumbling kind of charming, or as a possible indicator of sincerity. He's no Slick Willie.

The “elitism” of Democrats in the Clinton/Obama era is partly expressed in the way they speak, processed through Ivy League degrees. Often what they say is empty or merely manipulative, but it's very rehearsed, intentional, and often syntactical. That our leaders talk like that is more or less what we mean by “meritocracy.” Biden's verbal difficulties amount to a common touch; they're “relatable.” And, when you get right down to it, they’re trivial, compared to putting children in cages or mismanaging your way to 200,000 deaths.

It turns out, little as I want to admit it, that the people, including Biden, who argued that he was particularly well-suited to beat Trump—that he had a better chance than Sanders, Buttigieg or Harris—were right. Partly, that was an argument about whether the election would be won by "energizing the base" or by eating into the Trump vote. But Trump alone is enough to energize the Democratic base (though Barack rolling through Philly the other day doesn't hurt), and I think that Biden is nibbling at the Trump vote, specifically out here in rural PA. Trump is helping too; some former fans out here are getting tired of the schtick. The man is exhausting. Biden will win Pennsylvania, I think.

I was arguing against Biden during the nomination process because in my heart I'm anti-moderate. I was arguing against him because I think Democrats in his or Hillary's vein have been disastrous with regard to race in America and largely managed the country on behalf of Goldman Sachs. And I was arguing that Trump would take him to the cleaners because Biden can't talk good.

At this point, however, subtle or systemic corruption looks benevolent compared to the seething conflicts of interest and foreign cash entanglements of Trump. It's easier in some ways to deal with in-your-face racists than racists that don't believe they’re racist, who intend to oppress you while or by uplifting you. But re-electing the honorary chairman of the Proud Boys is pretty much the worst possible outcome. That's why I still think of this as a choice of evils. But that someone struggles to express himself verbally is not evil, not a moral failing, and it has turned out at this moment not to be a political failing either.