Biden is the essence of white liberal racism. 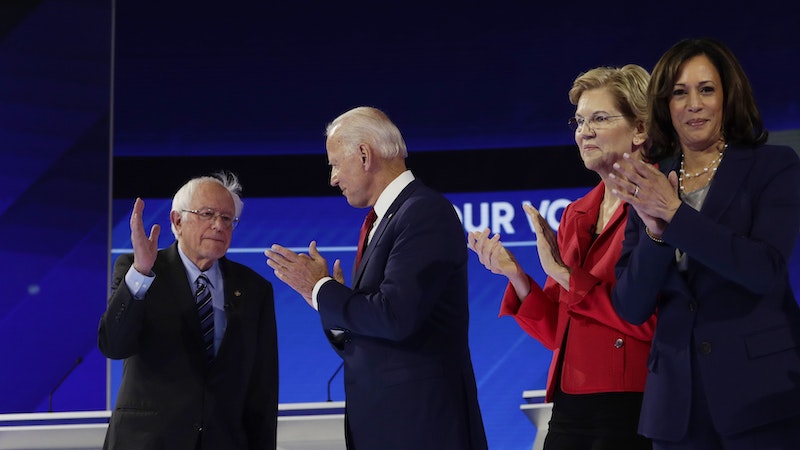 After last night's debate, I'd like to see three candidates drop out: Joe Biden, Kamala Harris, and Bernie Sanders.

Bernie has begun to grind me down: his tone is bludgeoning, with very little variation; he elbowed his way through, behind a gravelly, face-discoloring bellow. Also it's difficult to picture him mutating from the outsider channeling outrage at our corrupt system and insisting that we must imitate Canada and Scandinavia to actually being President of the United States. Biden, in what was his only decent moment, kind of muttered "This is America" as Bernie took us on yet another tour of Sweden.

Harris is grating as well: she's taking positions on any given day that reflect the polling; she has no convictions. Tough on crime when tough on crime is selling, release all the prisoners when it's not. A healthcare plan that she still can't make clear. She's trying so hard to hit the right tone that she misses it routinely. And she laughs with a slightly demented edge at the oddest moments. She tossed a rehearsed line at Biden: "Hey, Joe [for real], instead of saying, no, we can't, let's say Yes, we can! [confiscate assault weapons by executive order]." Then she laughed very awkwardly and very loudly at her own hilarity. She segued directly out of that laugh to "I've seen more autopsy photographs than I care to tell you." Way too desperate, with a tin ear.

Biden, I keep telling you, is an idiot, and Donald Trump will wipe the floor with him if they both get to the general election. The fact that he can't frame any issue clearly or explain any of his own policies sensibly must be dawning on people. He's popping up this morning with fairly good reviews, which is just bizarre, or represents the extremely low standards that are applied to him and people's resolution to stick to the safest choice.

Biden rarely makes sense, but when you figure out what he's trying to say, he's really, really wrong. He’s the essence of white liberal racism. It's the classic approach for which I've often blasted my mother, for instance, who’s 94. It starts with this question: Why are black people so dysfunctional, so stupid, so criminal? And then it proposes to sweep in and fix their children. With great generosity, it proposes to impose white liberal values on them and assimilate their culture.

Biden: “Number two [that's the way Joe starts every paragraph] make sure that we bring in to help the teachers deal with the problems that come from home. The problems that come from home, we need—we have one school psychologist for every 1500 kids in America today. It’s crazy. The teachers are—I'm married to a teacher. My deceased wife is a teacher. They have every problem coming to them. We have—make sure that every single child does, in fact, have 3-, 4-, and 5-year-olds go to school. School. Not daycare. School. We bring social workers in to homes and parents to help them deal with how to raise their children.

“It's not that they don't want to help. They don't—they don't know quite what to do. Play the radio, make sure the television—excuse me, make sure you have the record player on at night, the—the—make sure that kids hear words. A kid coming from a very poor school—a very poor background will hear 4 million words fewer spoken by the time they get there.”

"They don't know quite what to do," so we're going to need to tell them, or just inflict four million words on them whether they like it or not. Biden, for example, has produced four million words in the last year, without ordering any of them into a single clear or even syntactical sentence. If Hunter and Beau learned verb tenses from their father, the whole family needed a social worker hovering over them requiring them to leave to television on full blast, on pain of losing custody. "My deceased wife is a teacher," indeed. At one point he drew himself up haughtily and said "I am the Vice President of the United States."

The white left has moved on from its Clintonian program for the cultural annihilation of black people, thank God, and Beto O'Rourke managed to crystallize the way younger halfway decent white people are thinking about race now: they’re examining their own privilege and not blaming alleged black dysfunction on black people. They don't seem to think that hip-hop is the problem or standardized testing the solution. One way that Biden's age is an issue (he's always mangled the language like this) is that he's caught in liberal apartheid America.

Though (like everyone else) I dismissed him as "lackluster" after the first two debates, Beto is growing on me. I like people who cuss more than people who don't, the pussies. But Beto seems sincere to me, and pretty thoughtful, and certainly the best white candidate on race. He rested his discussion of race on self-reflection, but also on a series of facts he produced, of the sort that Biden couldn't state clearly if he spent the rest of his life trying to read them off cue cards: "In Texas, a five-year-old child in kindergarten is five times as likely to be disciplined or suspended or expelled." He talked about racial disparities "in our health care system, where there's a maternal mortality crisis three times as deadly for women of color," and "the fact that there's 10 times the wealth in white America than there is in black America." Biden is going to address those problems, which he diagnoses as caused by black pathology, with four million words, in random order.

Amy Klobuchar is like a pale Harris, her fellow persecutor: delivering markedly rehearsed lines with little effectiveness. These people's staffs write the most pitiful jokes, and both Klobuchar and Harris are the best or only audience for their own witticisms; they make themselves laugh, pseudo-uproariously. Klobuchar's penchant for self-praise seems hard to reconcile with her steady Midwest-schoolteacher blandness. She called herself "valiant." "I am someone that tells the truth," she claimed. "I don’t make promises that I can’t keep." "I've got a better way." Her every plan is "bold." But in her defense, everybody's every plan is bold. Bold as fuck.

Self-praise is habitual among politicians, particularly recently, and most particularly among the group of self-esteem addicts or egomaniacs or desperate, pitiful people who are running for president right now. I'd suggest doing something worthy of praise and letting other people praise you for it. If you insist, you can pay them. "Let me tell you why I am so fucking great," just brings on waves of nausea and despair.

Booker likes to roll out the self-praise too. He referred to himself last night as "a person with an ideal," and sometimes I believe him. Sometimes I get a little whiff of inspiration. Sometimes I like how he portrays every issue as a spiritual challenge. But sometimes I’m not certain whether he’s sincere and idealistic or just trying (too) hard to seem like he’s such a person. And he takes the opposite approach to Warren: where she has detailed policy proposal, he has a cloud of pseudo-MLK metaphysical inspiration. He doesn't really make as much sense as he seems to. "And we cannot lose [the 2020 election] by the way we talk about each other or demonize and degrade each other. We can walk and chew gum at the same time." That last is just one of the verbalizations people throw in randomly, like an “um” or “you know” or “bold.” Here, presumably, it means that we can both demonize and degrade each other, simultaneously. I've noticed that.

Elizabeth Warren did fine, and it's time for Sanders supporters to start or keep migrating over.

Julian Castro is taking a lot of grief for lacing Biden with "Did you forget what you said two minutes ago?" But someone has to point out that Biden isn't making any sense, and he did certainly forget what he said two minutes earlier, possibly because it was a garbled pile of jive. I liked Castro's defense of a combative nomination process as well.

Yang has just gotten no traction on my aging mind, but I'll accept the money.

And honestly, were I a Democrat really scouting for a candidate—and now that we've lost Tulsi Gabbard, if we have—I'd pick Pete Buttigieg. I think he's the smartest, most thoughtful and most eloquent of the bunch. He seems "presidential" to me: for a shrimpy 37-year-old he's got a lot of gravitas. He's reasonable and has never been a prosecutor. I don't think he'd lead the country into many avoidable disasters.