The Importance of Jeb Bush

He won’t run for president, but will shape the GOP debate. 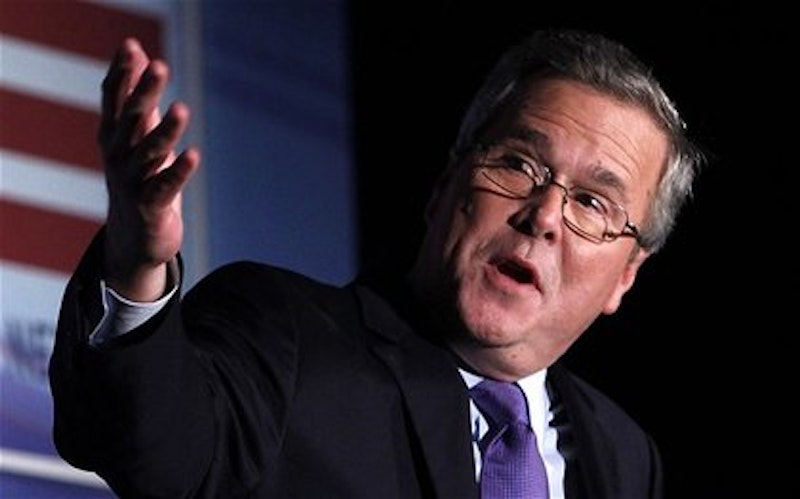 Jeb Bush is a politician, a profession in which a Krugmanesque ego is essential, so I’m certain he’s basking in the all the news stories—pro and con—about (again) the possibility of his seeking the GOP presidential nomination in 2016. And I guess he has moments, maybe after a Bud Light or Coke Zero, when he daydreams about moving to the White House and fulfilling a lifelong ambition. Plan to implement his pet policy ideas, tell the world the United States is back in business as an international power, and, not incidentally, restore the family name. All in the course of eight years’ work. It’s a wonderful life, after all.

In reality, the chances of Bush actually running are slim. It doesn’t matter that the “dynasty” issue, as he says, would be nullified if Hillary Clinton were the Democratic candidate. Jeb can’t win and he knows that. A bad roll of the dice, maybe, but his last name is still too tainted, notwithstanding the American electorate’s ever-shrinking attention span.

Nevertheless, that doesn’t mean Bush will be on the sidelines for this year’s midterms and the following cycle. The realization of a fruitless campaign has liberated Bush, enabling him to say whatever he wants, sort of like an octogenarian who can finally let loose with his or her opinions. Bush’s recent, and eminently sensible, comments about immigration demonstrate that he’s dissatisfied with the state of the GOP—the loons like Ted Cruz—and isn’t afraid to alienate the Nativists and social conservatives who are too infatuated with their sanctimonious rhetoric to understand the Republican Party is, currently, in fixer-upper limbo, and writing off non-white voters has disastrous consequences.

Bush’s public remarks about immigration last week set off cherry bombs and Roman candles in Rush Limbaugh World, which is always a positive development. He said: “Yes, [some illegal immigrants] broke the law, but it’s not a felony. It’s an act of love. It’s an act of commitment to your family… A price should be paid, but it shouldn’t rile people up that people are actually coming to this country to provide for their families.”

And this is why Jeb Bush could be the most influential man in his Party’s quest to re-take the presidency after Barack Obama’s two laconic (for the sake of charity) terms. The extremists in the GOP—whether it’s the religious social conservatives or the worst elements of the Tea Party—are out of favor, even if they refuse to acknowledge it. Mitt Romney was a tongue-tied candidate who didn’t have the guts to stand up to his intra-party critics and so bent his views to curry favor. His 2012 vote totals from non-white Americans, especially among Hispanics (a growing bloc that George W. Bush resonated with, as much as a Republican can), proved that a stagnant GOP has no future.

As expected, pundits ranging from The Weekly Standard’s Bill Kristol to BuzzFeed’s Ben Smith to the doddering Maureen Dowd stewed about the Bush boomlet, acknowledging that he could raise massive amounts of money but is too old-fashioned (meaning he’s not a master of social media) to make a compelling presidential race. Correct, but it’s telling that Kristol, for example, in sizing up the field, didn’t even mention Sen. Rand Paul—no doubt for the Kentuckian’s reputation as an isolationist—which, well, puts Kristol in the same old-guy camp. In fact, Paul has moderated his stance on immigration in an effort to move mainstream, and his Libertarian views on social issues are catnip to young voters who bought Obama’s “hope” shtick in 2008, went along for a second ride two years ago, but are now disillusioned by a president who doesn’t deliver. Kristol embarrasses himself by saying that Ted Cruz, Paul Ryan or Mike Pence (a big “Who?” from Americans) would make a better candidate than Bush. That’s just not believable.

My guess is that Jeb Bush is really a stalking horse for fellow Floridian Marco Rubio, a younger man with whom he has more in common than Paul. The election in 2016 is the moment for both Sens. Rubio and Paul: like Obama in 2008, they may never have a more promising chance to ride the wave for a new face, a new set of ideas.

Dowd’s April 9 New York Times op-ed, another exercise in nostalgia, is all wrong. After writing about “Poppy” and “Bar” and “W” for the 1500th time, the conclusion shows she hasn’t a clue: “Jeb thinks Republicans have lost their way. He may soon learn that a lot of conservatives think they have found their way—and it’s not the joyful, loving, government-can-be-a-force-for-good way. It’s the mean, cruel, gut-the-government way. When this crowd thinks of a Thousand Points of Light, they’re thinking of torches as they march toward the Capitol.”

Torches? Too much tube time for Dowd.

Right now, absent any scandals, I think the GOP nominee will be Rubio or Paul. And should that occur, there’s little doubt that Jeb Bush will be a mentor, a kingmaker, a man on a mission to reform his Party. Politically, it’ll be the capper of Bush’s career—unless his son George P. runs for president when his dad is an older man—and he can smell it.