Election news from Canada's best and most turbulent province. 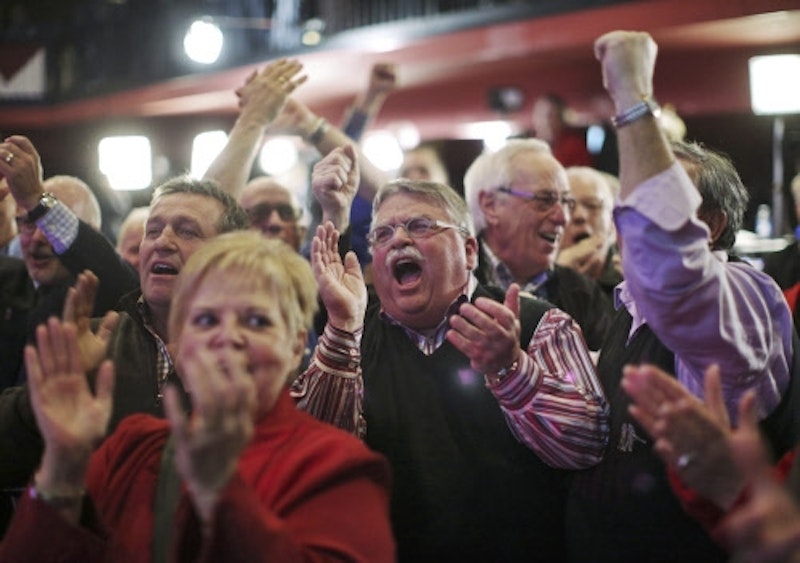 They just had an election up here. Not for the whole country, just one of Canada's parts. Québec, a province where most people speak French, just voted on bigotry versus non-bigotry. The non-bigots won. The election was also a measure of how badly separatism is doing among French Canadians. The answer: pretty darn badly.

The province voted Monday night and the Parti Québécois was kicked out. A month ago the party was high in the polls and hoping to win a majority of seats in the legislature. The change would have given it a firm grip on power after the party's year and a half of hanging on as a minority government. The PQ's magic weapon for drawing votes was to hassle Muslims, Jews and Sikhs who want to wear hijabs, yarmulkes or turbans. The party meant to do the hassling by means of a proposed charter that would have barred such people from government jobs in order (purportedly) to keep Québec secular.

The gimmick didn't work. The boondocks did not respond with a rush of votes. Meanwhile, the PQ lost ground in Montreal, the province's big city. The economy sucks, government officials are bought and sold—voters in the boondocks wondered why the party cared so much about turbans. Voters in Montreal, where many people wear turbans and the like, were actively pissed.

Officially, the Parti Québécois is separatist. It wants Québec to leave Canada, and that's why the party exists. Unofficially, the party is even more separatist, full of dinosaurs who swear by the old cause. But, officially, the party is not planning to do anything to cause a separation. The reason is that most voters in the province, French and non-French, don't want separation and the roiling mess it would bring. They don't want business flight, doubt about who's paying for the health care system, the prospect of border headaches every time they cross into Ontario or New Brunswick.

Practically, separation is a stupid idea. It's a fantasy, a flourish, a fist jab people can pump in the air so they feel better. The PQ's star candidate for the legislature, a hard-charging businessman named Pierre Karl Péladeau, raised his fist and said it was time to “make Québec a country.” This was at the news conference where the party introduced him as a member of its team. His comment was taken very seriously, perhaps because of the “Right on” power salute and a photo that caught the party's leader applauding as he delivered it. The Parti Québécois' biggest opponents, the Liberals, wanted to know if the PQ was going to have the public vote once again on splitting with Canada. (The party did so in 1995, with terrible effects on local business.)

The smart answer would have been no, or possibly a bland formula like “We're focused on the sort of Québec that all the Québecois deserve.” But the PQ's leader, Pauline Marois, couldn't bring herself to deflect the subject. When reporters asked about independence, she was like Mr. Memory in The 39 Steps: compelled to answer. Marois talked about how it might work, how it wouldn't be such a jolt. No special currency needed, the borders could stay open.

Perhaps this was her idea of reaching out to non-separatists. They didn't reach back. The Parti Québécois just had its worst election night ever. It lost almost half its seats, and the Liberals are in charge. Separatism is a dead cause, an albatross that embarrasses the party formed to promote it. And messing with turbans turns out to be a dumb political move.