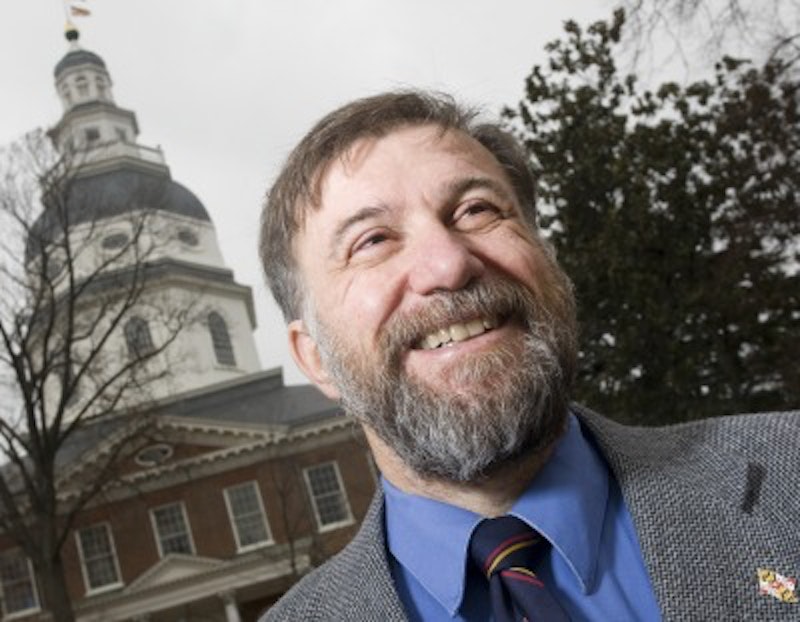 The irrepressible white-hat lobbyist Vincent DeMarco is the kind of stand-up liberal who would no doubt vigorously object to Grover Norquist’s demand for loyalty oaths from members of Congress to oppose any new taxes. But now DeMarco is insisting on pledges of allegiance from General Assembly candidates to raise Maryland’s cigarette tax by a dollar to three dollars a pack. It’s not the tax that stinks; it’s the pledge that sucks.

In announcing the latest epiphany of his life’s cause, DeMarco may have missed the exquisite irony in the timing. His newest crusade to curb smoking among kids coincides with Maryland’s systematic design to spread the lethal habit. DeMarco’s assault is on cigarettes. The state is gradually entering the marijuana business. To the throat and lungs they are one and the same. Only the brain, suitably fried, can discern the difference.

The General Assembly, during its recent session, made appropriate repairs to an earlier law that allowed the dispensing of marijuana for medical reasons. The original law licensed Baltimore’s two academic hospitals as marijuana dispensaries but they showed no interest in becoming, literally, drug dealers.

The newly re-jiggered law will allow certifying physicians to distribute pot. And in the session’s final hours, lawmakers decriminalized the possession of pot to a civil offense with a modest fine instead imposing criminal sanctions that often carried prison time and permanent records.

But the attempt to legalize the cultivation, sale and taxation of marijuana as a state revenue source was delayed for further study even though it won the backing of Senate President Thomas V. Mike Miller (D-Calvert). So it’s only a matter of time until Maryland gets into the pot business, following Washington and Colorado, which projects revenue this year, its first as a marijuana enterprise, of $100 million from the sale of weed. A recent Pew Report survey found that 75 percent of Americans support the legalization of pot, a titanic shift in acceptance as with other social issues such as same-sex marriage.

But the real inhaling menace is spreading in another format, the electronic cigarette, or e-cigarette. E-cigarettes mimic the real thing by delivering a jolt of nicotine without the cancer-causing agents, so its purveyors claim, but nobody really knows for sure as they’ve only been available for a few years. The toxic vapors have poison control on high alert just in case. One death has been attributed to e-cigarette nicotine juice since 2011 and in 2013 there were 1351 calls to poison control centers that resulted in 365 hospital referrals.

E-cigarettes are a Chinese invention and are for sale on the internet and at kiosks across the country for $100-$200 each, plus the cost of nicotine refills. Liquid nicotine can be purchased by the cartridge or by the barrel. The FDA has banned e-cigarettes from entry into the country and eventually may prohibit their sale. They have been banned in Canada.

The new push to up the tax on cigarettes is a joint venture between Maryland Health Care for All, DeMarco’s umbrella cohort of civic, religious and union organizations, and the Campaign for Tobacco Free Kids, led by Amy Barkley. DeMarco’s legislation to add a dollar to the cigarette tax died in the recent General Assembly session as did legislation to ban the sale of e-cigarettes to anyone under 21.

Kids are hooked on e-cigarettes’ seductively sweet flavors of menthol, peppermint, spearmint, green tea, grape, cherry, chocolate and many more—an advertised menu of 122 flavors in all, matched by different strengths and tastes that mimic popular brands of commercial cigarettes.

DeMarco and Barkley state that there are two compelling reasons to increase the cigarette tax. The first is that the increased price will discourage smoking and the second is that the tax is a revenue producer for cash-starved Maryland. If that sounds contradictory, which it is, and identical to the law of diminishing returns, which it isn’t, the numbers crazily support the illogic of the argument.

According to Barkley, there has been a 32 percent decline in smoking since taxes were added to cigarettes in two $1 increments. Along the same parallel line, tax revenues have doubled. When the first dollar was added to the price of cigarette in 2007, tax revenues from sales were $269.1 million. When the second dollar was tacked on in 2009, tax revenues jumped to $408.7 million, short of projections at the time but nonetheless a 50 percent increase.

By contrast, Norquist, founder of “Americans for Tax Reform,”opposes all tax increases. Norquist achieved notoriety around the time of the 2012 elections when 95 percent of Congressional Republicans and all but one GOP presidential candidate signed his “Taxpayers Protection Pledge.” The lone presidential holdout was Jon Huntsman. That totaled 238 of 242 GOP House members and 41 of 47 senators, virtually absolute domination of Congress on tax matters.

Norquist’s enforcement power resided in his ability to raise millions of dollars to field and fund primary candidates against any signatory to his pledge who broke his word or betrayed his fidelity to the anti-tax cause. That led to Democrats’ charges that GOP lawmakers were elevating their pledge to Norquist as more sacred than their oath to the Constitution. Norquist’s dictatorial hold on the GOP-led Congress faded, though, when he forced the nation to the so-called “fiscal cliff” and the disastrous fiscal policies that led to the government shutdown.

Come now DeMarco and Barkley with their pledge cards and their threat to publicize the names of both those who support and reject the promise to increase the cigarette tax. Their intention may be noble but their methods are no different that Norquist’s. They may not be able to shut down Maryland’s government but they should reconsider binding legislators to a pledge that might not be compatible with overall tax policy in the future.

Candidates for public office routinely receive election-year questionnaires, requests, demands for commitments, even threats, from a long list of interest groups, organizations and individuals who are seeking favors and promoting causes. Many of the forms go directly to the shredder. Yet others feel compelled to oblige a response either out of genuine or faked conviction or merely constituent suck-up. It’s almost an act of sedition for any public servant to sign a pledge of any kind to any one or thing but the Maryland Constitution.

But there is something repugnant and heavy-handed about handcuffing a lawmaker to an evanescent proposition as a condition of support or favor or worse, the threat of reprisal - defeat by a thousand news releases. It lacks the finesse of more refined advocacy skills and techniques or, simply, the art of the schmooze. It resembles too much the stiletto tactics of Norquist. Or more appropriate still, the 2004 presidential campaign of George W. Bush in which those attending his speeches were required by the Republican party to sign loyalty oaths as the price of entry.

DeMarco and company have been down the cigarette tax track many times before with a mixed record of success and defeat. Instead of overt and implied threats against reluctant lawmakers, why not just show the ministers of influence in the State House pictures of kids with cancer. As the beloved and late Artie Donovan once remarked when asked if losing the Colts was a tragedy: “No, that’s a football team. A kid with cancer is a tragedy.” That kind of puts things in perspective.