That was last week: his new poll tells a different story. 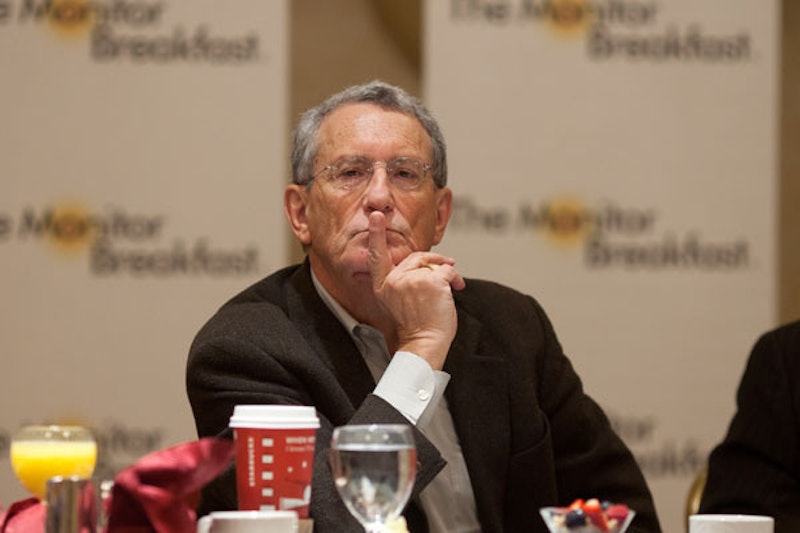 I’ve no idea whether pollster/strategist Stanley Greenberg’s celebration of the Democratic Party’s future published last Thursday in The Guardian was a “native advertisement,” but it read like one. Granted, The UK left-wing daily is shameless in shilling for this or that liberal cause—its ideological counterpart The Telegraph is at least more circumspect—but Greenberg’s op-ed was, if not a new low in propaganda, pretty darned close. And good for Greenberg if he can get away with it! He can’t complain about the promotion for his new book America Ascendant—that’s the credit The Guardian gives him, not mentioning his party affiliation. The gist of the 70-year-old Greenberg’s brief, headlined, “I’ve Seen America’s future—and it’s not Republican” (I guess the copy editor is a Springsteen fan, aping Jon Landau’s famous line from 1974), is that rapidly changing demographics in America threatens the Republican Party with extinction.

Saying that the GOP “brand” is “badly tarnished,” Greenberg, who’s a veteran of the Bill Clinton, Al Gore and John Kerry presidential campaigns, gives readers a recitation of the very stupid remarks by Republican “outsider” candidates Donald Trump, Ben Carson and Carly Fiorina, and concludes the Republicans are running a “race to the political bottom because America’s conservatives are losing the culture wars. The US is now beyond the electoral tipping point, driven by a new progressive majority in the electorate,” led by racial minorities, single women, millennials and secular voters.

Greenberg doesn’t once mention Sen. Marco Rubio, currently seen as the most credible GOP nominee, perhaps because he’s more sane than, say, Trump, or maybe because he’s from Florida (again a key swing state) and Hispanic. In addition, it’s said that the Clinton team fears Rubio more than any other competitor—which makes sense since she’d win in a landslide over the aforementioned “outsiders” as well as the demagogic Sen. Ted Cruz.

But here’s a problem: as always in politics, grand predictions are perishable. Greg Sargent, the excellent liberal blogger/reporter at The Washington Post, ran a short post today about a new Greenberg-sponsored poll that shows single women, minorities and “particularly” millennials are “significantly less tuned in to next year’s election than GOP-aligned voter groups are.”

Greenberg concludes his Guardian ad, or op-ed if you wish, by saying that because of a Republican Party that’s tied to outmoded cultural values, its candidates are not “plausible presidents in a country that is past the new electoral tipping point. America will get to send that message 12 months from now.”

Maybe so, especially if the GOP nominates someone who metaphorically spits on women and minorities, and doesn’t even attempt to dent the youth vote that delivered so spectacularly for Obama. But in the past 20 years, we’ve heard about The Republican Crack-Up, The Democratic Implosion, and so on, alternating in different years and depending upon who’s making the prediction. While Greenberg admits that the House is likely, for the time being, to remain in Republican hands, as well as state legislatures, he’s so certain (at least in the Guardian piece) of his demographic number-crunching that he doesn’t even allow the possibility that the GOP will adapt. Perhaps it won’t, but that’s unlikely: 30 years from now, despite what partisans say, it’ll be the same two parties duking it out, trading the White House and control of Congress.