What Do You Say When You Can't Say Sexist? 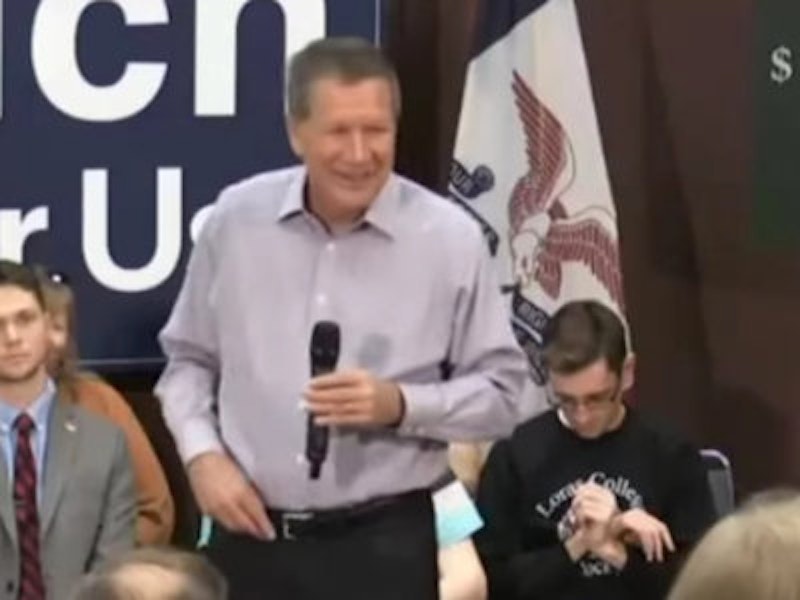 An exchange isn't awkward if the people involved don't feel awkward. If some third party tells you it's awkward, that person is trying a number. I mention this because John Kasich asked a woman if she had ever dieted. He was making a point about the federal budget and the fight against spending. The woman didn't mind, not if we go by the clip found on Talking Points Memo. Yet the accompanying post and headline describe the exchange as “awkward.”

What the writer means is that she disapproves of the exchange. A man shouldn't ask if a woman diets. Because thinking she might diet is next door to assuming she diets, I suppose. The writer never tells us what's so bad about Kasich's remark.  That isn't need-to-know, as far as we're concerned: we're all going to tut anyway.

If Kasich had asked a woman when she was going to quit her job and have babies, we'd all see what was so awful. The same if he asked her if she went nuts with her clothes shopping and ran up bills. There are plenty of awful things he might have said. But this question about dieting is not awful. If you think somebody might be a big shopper or an impending stay-at-home parent, you do so because she's a woman. If you think she might have dieted, you do so because she's a middle-class American. No doubt women diet more than men do. But men diet plenty and we piss and moan about our weight. We can spend decades at it, just like women do.

Everybody knows this, at least if they're over 30. The TPM writer could be under 30, and she is certainly not someone of keen perception. She couldn't even understand the text of Kasich's remarks, let alone the subtext. “You set a goal and you reach it, and then what happens?” Kasich says. The writer thinks Kasich is “referring to possible weight loss incentives.“ No, he's talking about falling off the wagon, about the way people slip back. Again, anyone can tell. The only person who couldn't is the woman who wrote the post. Yet she's going to decide whether or not the exchange was awkward.

Of course, she's not going to notice what Kasich does when he brings up dieting. But there it is: he touches his waistband. Not on purpose, I'm sure. Like a lot of us, his hands go for a moment to wherever he feels a bit too much is bulging out or hanging down. Like a lot of us, he isn't quite trim. He has nothing to be ashamed of (assuming fat is something you're against). But I bet he's 10 pounds over his preferred weight, and that staying in sight of this preference is a long twilight struggle. When he talked with the woman about dieting, it sure seemed like they were sharing common ground.

People ought to recognize the sight of common ground. The point of worrying about viewpoint and microaggressions is that, if we don't, people get left out. They can be around, but on terms written for them by rules that assume these people aren't really there, that they're props. For instance, rules that assume a woman must be a shopper, no matter who she actually is. We're not talking about major incidents here—hence “micro”—but add them up and a person spends a lot of time getting wrong-footed. That's not what we see with Kasich and the dieter. The opposite is going on: two people are stepping onto the same spot and sharing something a lot of us share.

Again, not a big deal. But imagine mistaking this thing for its opposite. The writer couldn't imagine that her viewpoint was not the only one. Kasich and the voter didn't behave according to her idea of propriety, and she couldn't see that her ideas might budge a little. Instead she reached for the outrage meter. But she couldn't find a proper place to set the dial. Misogynist? No. Sexist? Creepy? Offensive? Finally the dial slipped down to Awkward. An odd kind of setting; awkwardness isn't normally the sort of thing one has an alarm system for. (Bigotry, sure. Offensiveness, yes. Awkwardness, no.) But she had to say something.

Of course, using awkwardness can be seen as a hint that the talk was somehow creepy, just not creepy enough for the writer to come out and brand anyone. That's a hell of a hint to drop about a conversation between a man and a woman. Men get ostracized for being creepy. But I doubt that the writer thought about the word's implication. Maybe the hint of creepiness made awkward feel like it had some weight after all, and that decided her: yes, she had a post. If people thought maybe they ought to ostracize the guy, so be it. She's comfortable with that reflex.

The result of her decision-making strikes me as thought product with a minimum of thought. As such, it may represent the rudiments of multicultural thinking, the reflexes and twitches that are left when anything requiring effort is taken away. If so, thank God we're achieving a new social order de-centered from the white heterosexual male. Because if we weren't, we'd be suffering through shit like the “Do you diet?” post for nothing. As it is, a great project is being accomplished in the way great projects so often are: the worst way possible.