Putin set to use Syria as a means to restore Russian greatness. 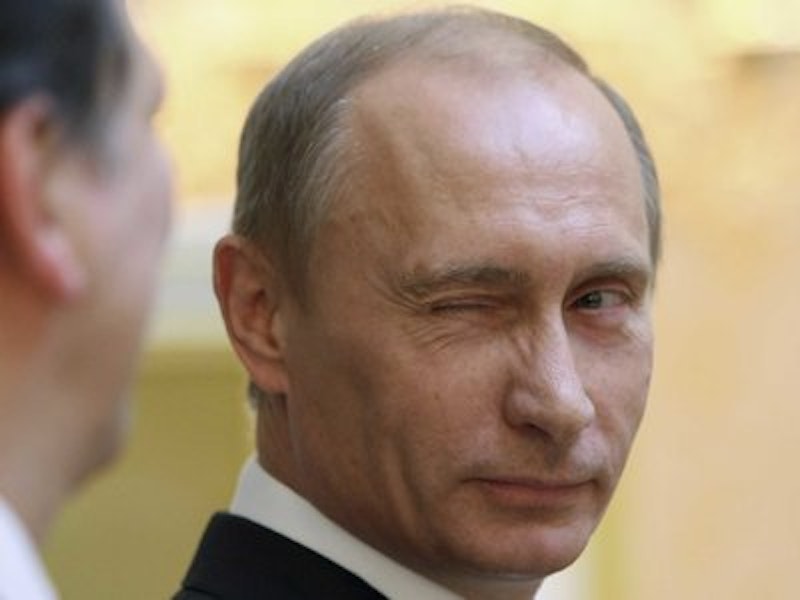 Forbes recently named Vladimir Putin the world's most powerful person, and it must’ve made him smile to see that President Obama was two spots below at number three. The three position (Angela Merkel was the runner-up) is significant in that it's the first time a sitting American president hasn’t been in the top two on the magazine’s annual list. This distinction will not be lost on those Fox news viewers who hold Putin's swaggering ability to project his power in high regard. Obama, with his "mom jeans" and bicycle helmet, just doesn't make their hearts flutter like the Russian strongman.

Putin holds a number of advantages over Obama in the power-wielding department that go beyond stylistic matters. He has the Russian parliament under his thumb, and no matter what he does, his popularity at home keeps soaring. He's a true Teflon leader at this point, receiving his highest ever approval rating of 89 percent in June among the Russian people.

Putin's sustained popularity after several aggressive power plays emboldens him to keep it up. He's now inserted himself in the heart of the Middle East's major disaster zone, Syria, and Obama, whose main strategy there has been to do almost nothing, comes out looking weak.

Much of Putin's popularity stems from his firm grip on Russia's state-controlled media. Using the media as his mouthpiece, he’s succeeded in spinning the narrative that Russia is the victim of West, which is determined not to allow a return to its glory days. The suffering that the Russian people are feeling due to the West's economic sanctions is portrayed as just another example of such persecution. Putin gets off the hook as he and his cronies enrich themselves, while Russians are left to deal with an economy that was already damaged by cratering oil prices.

Putin, however, is in uncharted territory with his Syria incursion since, unlike Chechnya, Georgia and Crimea/East Ukraine, it’s outside the former Soviet Union. Most Russians have no particular attachment to the Middle East, and the bad memories of Afghanistan still linger. Bombing ISIS is not a hard sell, but committing ground troops is another matter. Putin has insisted he has no intention of Russian-language troops fight on the ground, that the 4000 troops there will be used for advising, training, equipment delivery and guarding Syrian pilots, but it remains to be seen what his actual plan is.

Putin finds himself in a trickier position now that it’s starting to look like an ISIS bomb took down the Russian Airbus over Egypt. When you invade the Middle East, you can expect blowback. The funerals have already started, and there will be many more to come, a steady reminder that Russian citizens are now targets of a brutal gang of Islamist extremists.

It's unlikely that the air disaster will be a serious blow to Putin’s designs on the Middle East. He has long identified radical Islam as a threat to Russia, and his plan will now stress that the U.S., in a state of moral decay with gays marrying each other and secularism trumping Christianity, is too decadent to stand up to ISIS. It’s up to Holy Russia to come to the world's rescue. If Putin is able to pull it off—if he’s able to convince the U.S. and European powers to join him in his efforts to stabilize the region—Russia gets to look like the global power it used to be while exposing the U.S. as a paper tiger.

The blown-up Airbus is a setback, but it won't slow down Putin's plans in Syria. On the contrary, as he's representing himself as the hero who will rescue us all from ISIS, he can hardly back down at the first setback. He's likely to escalate matters now that Russian blood has been spilled. It's a high-risk endeavor, and if Russian ground troops get involved the actual fighting, the stakes get raised significantly.

Putin’s already taken down the oligarchs, and his cronies now run most of Russian industry. He's firmly in control there, though he has much less to say on what will happen in Syria. Who knows what his ultimate endgame is. Russians like the feeling of stability he provides, but he's dismantled the economic and political infrastructure the country will need when he's gone, and when that happens, its citizens will really pay a price.