Jeb and Rubio and Chang, and Will Ferrell

Maybe this could be a movie. 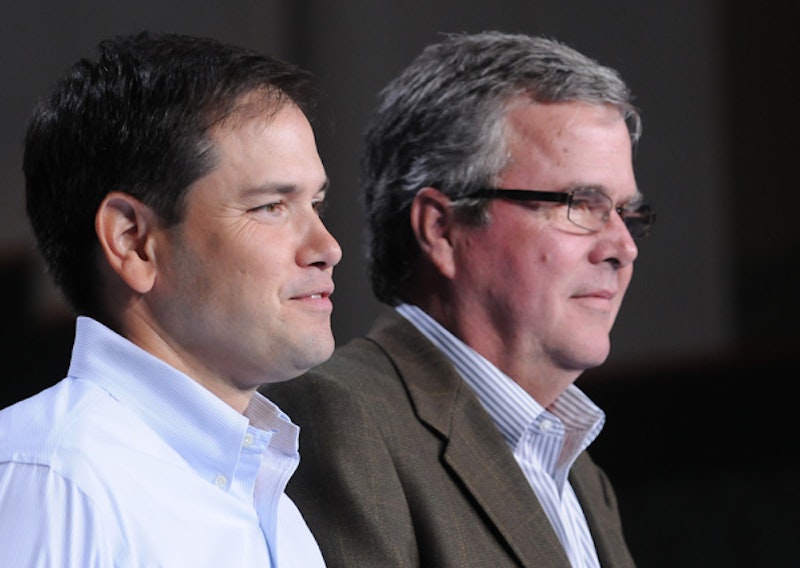 Cold. So cold. “I have it somewhere at home,” Marco Rubio says. “I have young kids. I don’t want them to run around with a sword.” He's saying he's not sure where it is. That sword used to hang in his office. Jeb Bush gave it to him back when he was Florida's governor and Marco had just become its Speaker of the House. Now the thing is packed away. Meanwhile, Marco blandly strips the hide off Jeb in the battle for president.

The Washington Post quotes a friend of the ex-governor as saying the sword “really meant something to Jeb... He thought it was Marco who would continue his legacy.” This news is a tipping point. For a while now the Jeb-Marco business has seemed like the plot of a Will Ferrell movie. The ambling lunk is done in by his smooth little ex-protégé, with a great deal of flailing and bleating as a result. “I don't want to be elected president just to sit around and see gridlock just become so dominant that people literally are in decline in their lives,” Jeb says. (“Literally are in decline in their lives”? Jeb Bush can say that, and so could a Ferrell character, but nobody else could.) Now we have a gimmick to go with the dialogue.

If a lunk in a Ferrell movie had to signal his love of important values, he might find a rink-a-dink imitation sword and make up a goofy story. From now on, for him, the rink-a-dink sword would be the Sword of Chang. At the arrival of a big moment, he would pause, look somberly down at his little partner, and then hold out the sword to his protégé. Later, when the plot heated up, we'd find out that the ex-protégé had trifled with the sword—say, packed it away he knew not where. Then Ferrell would charge out, blood in his eye, and get creamed. And here we are.

The last Ferrell touch is that “Chang” is Jeb's misrendering of Chiang, as in Chiang Kai-shek, the man who settled for running Taiwan after Mao beat him in China. One reads that Jeb the boy would hear his father say “Time to unleash Chiang” on the tennis court. This was ruling class humor. During the 1950s, conservatives argued that Chiang could return to China and knock Mao's forces aside. They said the problem was that Democrats or State Department pinkos wouldn't let him. “Unleash Chiang” was their slogan. George H.W. Bush would trot it out just before he served because his serve was nothing much. He was having a laugh at himself, and also at the neanderthals.

We don't know if Jeb ever caught on. His sister understood, because she's the one who wrote up the business. But maybe not Jeb. At any rate he turned the phrase into the Sword of Chang, and to the sword he attached greeting card sentiments that had to do with the free market and so on. Jeb's remarks when bestowing the sword on Rubio: “Chang is somebody who believes in conservative principles, believes in entrepreneurial capitalism, believes in moral values that underpin a free society. Chang, this mystical warrior, has never let me down.” Like his dad, Jeb can be playful; that's a good thing. But the Chang remarks make for a vapid statement of principle. The ideas are name-checked, and the one bit of thought is the goofy squiggle about the warrior. That's all Jeb could get together when it came time to hand something on.

As the family's thinker, Jeb has mustered a lot of enthusiasm for conservative ideas. But, like a Ferrell character, he's enthusiastic for something while being rather blank about it. A Jeb or a Ferrell character doesn't proceed through life by having perceptions. Enthusiasm galvanizes him, and when galvanized he pays no regard to circumstances. The Bushes as a whole lean toward pep and away from ideas. George H.W. Bush was no dope, but he preferred activity to thinking. He made it to president even though he didn't know what he wanted to do there, aside from not screw up. His beliefs were standard to the U.S. ruling class: the value of the Atlantic Alliance, the importance of the bond market and balanced budgets, the need to keep voters happy with jobs and prices, and always the folly of messing with how another country governed, as opposed to how it treated U.S. interests.

Then came his sons. H.W. was pretty sure he didn't have ideas. His sons thought they had some doozies. The older Bush, like a good conservative of long ago, laughed at the idea of unleashing anything. For instance, he looked at Reagan's tax cuts and said “Voodoo economics.” But the Reaganites won, so he swallowed his joke and signed on. His sons, in Bush fashion, absorbed the new philosophy without thinking about it, then got busy being the ones who would execute it in government. Like their fellow conservatives of the post-Reagan era, they figured there was always something big and bold to accomplish through unleashing. Jeb did his unleashing in Florida. On a bigger scale, W. unleashed the economy with his tax cuts, and U.S. military strength with his Coalition of the Willing, and the democratic energies of the Iraqi people with the coalition's adventure in Iraq.

Except that nothing got unleashed and a lot of people suffered. Now Jeb thinks a grateful nation will make him president. Ferrell characters commit in situations where no committing is called for. Tank in Old School thought he was leading a streak-a-thon; the doof in Step Brothers thought he was singing opera. Ricky Bobby committed to the idea that he was on fire when he wasn't. Jeb has committed to the idea that he and his brother have accomplished something in public life. They didn't. Jeb thinks he's a presidential candidate. In Rubio's phrase, Jeb is just walking around.

The Hollywood version would end with the lunk and his co-star reconciled. If that happens with Jeb and Rubio, it will be when Jeb endorses Rubio in a convention speech. The ex-governor is dead meat. He can't figure out why Republican voters keep turning to that brain doctor or the TV star, or even the young senator with nothing all that major on his resume. Jeb never saw it coming. The voters on his side, conservative voters, don't want anyone who had a big role in subjecting the country to conservative principles. That's funny. But the whole business would have been better as a movie.